Switched at Birth Live Detailed Recap: Season 3 Episode 20 “The Girl on the Cliff” 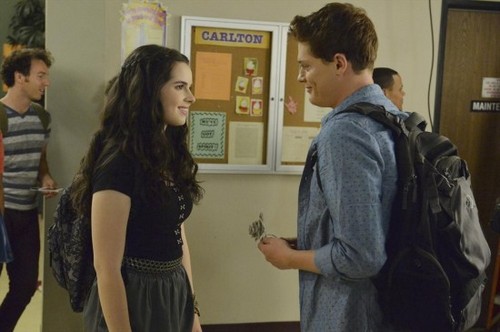 SWITCHED AT BIRTH returns to ABC Family tonight with a brand new episode called “The Girl on the Cliff.” On tonight’s episode as per the Freeform synopsis, “Bay has second thoughts about attending the prom when dress-code rules are enacted. Meanwhile, Kathryn, John and Regina are surprised to learn the severity of Daphne’s bad behavior; and Tank assists Toby with his new burgeoning business.”

Tune into ABC Family at 8 PM EST to watch “Girl on the Cliff” we’ll also be recapping it all live for you right here. In the meantime head to our comments section and tell us your thoughts on season two so far and enjoy a sneak peek of tonight’s episode below.

Bay finally worked up the courage this week to tell her parents (all three of them) about Daphne’s out of control behavior but instead of sticking together to confront Daphne and hopefully get their daughter through her rough patch – the parents started turning on each other when they found out a few things. Like the fact that Regina had pulled a gun on Daphne and that even now she’s currently in business with former Senator Koto. Plus Daphne might have thrown in that she admitted to doing drugs to Regina beforehand though Regina at the time thought her daughter was only confessing to weed. Cocaine on the hand isn’t something she would have as easily disregarded.

Yet Daphne isn’t just dabbling like she claims. She didn’t like cocaine when she tried it but that didn’t mean she was going to pass up the chance to steal Oxycodone when an opportunity presented itself. After all she does work at a clinic. And once during one of the rare times her boss trusted her with the keys to drug closet – she abused that trust and took prescription pills!

Earlier, Kathryn had suggested taking Daphne to see a therapist and her husband once again overruled her because he wanted believe their family troubles wasn’t as bad as it sounded. When the truth is – Daphne is in that bad of a shape. She’s doesn’t want to talk about college or even about continuing with pre-med. Although, luckily, Daphne did stop herself from actually taking Oxycodone.

She changed her mind at the last minute and flushed the pills down the drain which in all honesty was stupid of her. If she didn’t want to use them then she should have returned them. The medications are counted up on a daily basis so when they turned up short (after Daphne’s moment of weakness) her boss was left with no other choice than to fire her. He didn’t necessarily want to yet he also knew that Daphne had to learn some consequences!

But while Daphne has been lost in her own little world – her friends and family have moved on without her. Bay, Emmett, and the rest of her friends are all caught up in prom. Emmett has been secretly campaigning without Bay knowing about it. And apparently he was so good at it; he and Bay were nominated, Prom King & Queen.

Bay wasn’t all that ecstatic about her new title though she did end up using her “powers”, as limited as they were, for good. Her friend, Natalie, was going to miss prom all because their principle had enacted a strict dress code. He demanded that all girls come in dresses and that all guys show up in tuxes. And that was unfair to people like Natalie’s girlfriend who hasn’t worn a dress since she was two.

So Bay talked with a couple of her friends and had all the girls show up to Prom wearing tuxes. They figured if they stood up together then even if their plan didn’t work they would still go down together!

They weren’t allowed into prom. The principle didn’t want to allow freaks in just in case it corrupted the rest of the student body so Bay and her friends came up with an alternative. They hosted an outside prom in front of their school and pretty much enjoyed themselves in spite of ignorant people trying to stop them. And eventually, Matthew came back to celebrate prom with them!

It was a very noble thing they did and it ended up inspiring Toby who was also suffering from a moral dilemma. Tank had helped him create fliers so that he could get a job and the first offer he received was from Tank’s former Frat house. When Tank found out; he had asked Toby to turn the job down. Only for Toby to say “no”.

He didn’t want to risk refusing one of the rare shots he had at making money but after seeing up close how good of a friend Bay was – he realized that he might have been too quick to dismiss Tank’s feelings. Now that didn’t stop him from going but he felt bad that he did.

Later, Regina and Wes found out about Nacho vandalizing the construction site for their project. The idiot was caught on surveillance cameras so Regina was able to identify him fairly quickly. However turning him wasn’t as easy. During the short-lived intervention with Daphne – Regina learned that Daphne and Nacho had been seeing each other. So at first she attempted to cover the whole thing up. She told Wes she needed check for herself that Nacho was really the guy in the video when what she really meant was that she needed to have a chat with her daughter.

And speaking with Daphne cleared some things. Something is truly wrong with Daphne if she doesn’t seem to care about whether or not she’ll go back to jail. Regina had finally stopped pandering to her feelings and was demanding answers when a jittery and somewhat confused Daphne then made up the excuse that she had to return to the clinic.

Daphne went to Angelo’s grave instead and it was there that both of her mothers found her. Yes, they were angry but their main concern was Daphne’s well-being and they knew that she had to get over her own guilt towards Angelo so they were just there for her.

And heaven knows she’s going to need them more than ever – Wes is still about if he should press charges. He doesn’t care that Regina tried to make excuses – he feels that Daphne crossed the line!