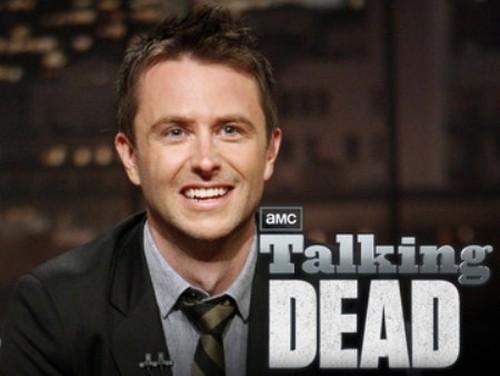 Talking Dead returns this evening with special guests Joe Kernen, Jim Gaffigan, and a surprise cast member. Did you watch the last episode of Talking Dead? The special celebrity guests were Greg Nicotero and Walking Dead actress Danai Gurira.  If you missed it we have a full and detailed recap, right here.

RECAP: Chris introduces his guests who are Joe Kirnen, Jim Gaffgan and Alanna Masterson; Chris asks Alanna what Tara was feeling sitting in that fenced in area when Glenn found her. Alanna says that she is so shocked with everything that has happened and trusted Glenn because of him giving her hope because he is the only one who came to him; Chris believes that helping someone is a reason for her to go on. Chris asks if Joe was surprised when Glenn stopped helped out Tara; he said he was fooled the whole time. Chris asks if Jim woke up and was surrounded by walker what he’d do; Jim says he’d first look for food. He’s more like the zombies; he doesn’t moan but he wants the food. Jim says he was impressed with Glenn thinking three steps ahead; he isn’t sure that he would survive and says when it rains it’s an apocalypse for him. Joe says that there was a moment when Glenn looked like he was going to give up but thinking of Hershel saved him; Chris feels like Hershel being gone now gives him a deeper connection to Maggie and must find her.

Chris gets a guest a fan to ask a question; Andrew asks what the head of the zombie she smashed was made of. She aimed for the ground beneath it and went all out on; she even bent the gun. Chris hands Andrew a bunny for asking a question; one that Lizzy hasn’t touched. CHris asks if Maggie is a threat because of her ties with Glenn; Jim says emotions can really make a mistake happen because she almost got herself killed. Chris asks how Maggie will react to Tara being with her; Joe says Maggie is emotional mainly because he’s with a girl part of the group that cut off her fathers head and that it’s another girl. Chris asks why Tara decides to go out on this journey with Glenn; Alanna says she knows how to care for someone and gets wants to make up for what she has done. A caller asks if they’d trust a sign that says sanctuary; Jim says he just wants to know where the sanctuary is any ways.

Chris asks how long Carol can keep her secrets from Tyreese; Joe says that she can keep it for a while. Joe asks if she could be forgiven; Chris says after he tries to kill her of course. Chris asks what he’d do with his five kids in a zombie apocalypse; Jim thought about it and said he’d be the same but with more muscles than Tyreese. Chris asks how Joe felt about Judith living; Joe said he loved how it was shot and you see Tyreese turn around with the baby.

Chris says that Lizzy was crazy in smothering the baby; Jim says she was having fun killing that baby. Chris asks who’s smarter; Lizzy who loves to kill or Mika who runs. Chris thinks you need both; you need people who can run and those who are not afraid to fight. Chris says that Lizzy has no remorse or fear; Joe says that kids who kill animals become serial killers. Jim says there must be humans that are more attractive to zombies; Jim feels like he’d be the one to eat.

A fan comes up and her name is Laura and asks if Beth wasn’t there to motivate Daryl if he would give up; Chris thinks he’d be a nomadic loner for a while. Joe says that he was anti-social before but now he feels like that he has kind of went back to that feeling; Chris gave Laura a question bunny. Chris says that seeing Abraham and Jim says he never read the comics; Joe says that his son says that they made the characters pose just like they look like on the comic cover of one of the issues. Jim says this is bad news; he feels like whenever there is something with military there is a lot of bad things to come. Especially how they just watched the battle; if they are good to fight then they’ll take them.