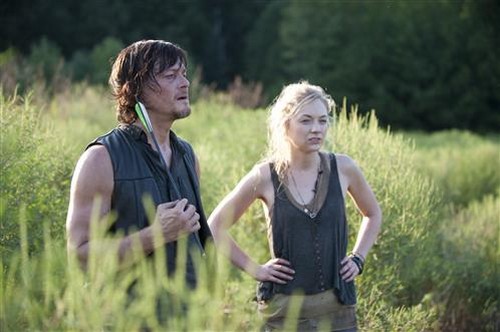 Tonight on AMC THE WALKING DEAD returns with all its gory goodness and a new episode. Tonight’s episode is called, “Inmates” and on tonight’s show In the quest for stability and safety, the group faces many obstacles.  If you happened to miss the last episode before the break, don’t worry. We’ve got you covered. Click here for a full recap of the last episode to find out what you missed!

On last week’s episode finally The Walking Dead was back and I was glad but pissed.  They started the show with a zombified Hershel’s head that Michonne had to put her sword through.  Totally gratuitous :-(  From there Michonne went on to kill many walkers.  Rick and Carl were together and with Rick laying in a bit of a comma Carl ventured out on his own.  Carl soon found out that he was not the big man he thought he was and he needed his father.  By the end of the episode Michonne is about to find Carl and Rick.

On tonight’s episode the scattered groups begin to unite.  The group encounters obstacles in their quest for stability and safety.  The episode will concentrate on the other surviving prison members.   The episode was directed by Tricia Brock.

Tonight’s The Walking Dead Season 4 episode 10 is going to be exciting, and you won’t want to miss it. So be sure to tune in for our live coverage of the new episode of The Walking Dead — tonight at 9PM EST! While you wait for our recap, hit the comments and let us know how know how excited your are for the mid-season premiere of TWD and what are you hoping will happen this season. Check out a sneak peek of The Walking Dead “Inmates” below! Don’t forget to come back at 9PM.

RECAP: We see Daryl and Beth running in the forest away from a bunch of walkers; Daryl starts fighting off walkers and shoots one in the head with his cross bow, he pulls out the bolt and continues running with Beth. Beth and Daryl start running through tall grass out of the forest and both fall down and lay on the ground exhausted.

Beth and Daryl are sitting at a fire, Beth says they should do something and that they are not the only survivors; she believes that the others could have made it out of the prison. Daryl sits there quietly, Beth tells him he is a tracker and that he can find them; Daryl doesn’t answer and Beth goes off saying she will track them on her own. Daryl puts out their fire and follows behind; it’s now morning and Daryl finds some foot prints and he believes they are 5 hours old. Beth and Daryl are walking through the forest; Daryl notices that whoever they are following got out in a hurry. Beth finds some berries and starts collecting them; Daryl hands her a bandana to hold them in. Daryl and Beth find two walkers on the ground not moving; Daryl says that there is human blood on some plants. Beth hears a sounds and pulls out a knife; it grabs her and Daryl throws down his cross bow to grab it, Beth then stabs it in the head. Daryl picks up the cross bow again and tells Beth to follow; they arrive to a train track.

Near the train track is walkers eating people; Daryl goes around killing them all. Beth starts crying, but Daryl only keeps moving. The two make another fire at night; Beth says that none of them are going to die and that if it doesn’t work then she doesn’t know how she will keep going.

they are both with Tyreee and he has baby Judith with him. Tyreese starts to mend one of his wounds; Judith starts crying and Tyreese tries his best to quiet her. Lizzy gives him a bottle and he gives it to her, walkers arrive and Tyrese tells the kids to follow him and it’s all okay. Tyreese finds some berries and the girls decide to eat some of them, Tyreese is trying his best to deal with Judith but she keeps crying. Tyreese is changing her diaper but she keeps crying; walkers start coming and Tyreese tells them to watch the baby. Tyrese takes out his hammer and a bunch of crows come out; Mika runs into the forest scared and Tyreese chases after her. Mika says she got scared and Tyreese says she did the best thing to run from the walker; but in a group she should stick with the others. Tyreese hands the baby over to Lizzy and tells them to look in both directions; he hears screaming and decides to go help. Tyreese tells them to run if they see a walker; Mika says she doesn’t want him to go. Tyreese tells them it’s okay and that they can handle it, he runs off into the forest.

Lizzy and Mika are trying to quiet the baby; Lizzy puts a hand on her mouth and walkers come out. People are being eaten by walkers and Tyreese is doing his best to kill the walkers; Lizzy has her hand over Judith’s mouth and Mika shoots a walker. Tyreese hears the gun shot and panics; the people he tried to save get bit by walkers. Carol arrives to the scene with both Lizzy, Mika and Judith; a guy bitten by walkers falls down in pain. Carol is told to that staying on the tracks was his mistake, but says there is place safe up the tracks to take the kids. They leave the man crying; Mika says to Tyreese that she didn’t run but he tells her she is a tough little lady. Carol has a back pack full of water and food for the kids; Tyreese says he never saw her get out. Carol mentions she wasn’t there yet and says that she was out still looking for supplies; Carol mentions seeing the end and followed them into the woods. Tyreese says that they can circle back to find the car; Carol says that there is no way.

Maggie is scraping a knife on a rock while Sasha is taking care of Bob’s wounds; Maggie says she is going to find Glenn but Sasha says that they can’t split up. Maggie says she is going so Bob goes ahead and follows Maggie, the three are now walking down the round looking for the bus Glenn was on. Sasha says they should be looking for food and shelter; Bob asks what that they’ll do after. Sasha doesn’t know, Bob says that he’s down with finding others first. Maggie finds a bus on the road and starts rushing towards it; inside are walkers and they are all throwing their arms out of the windows. Maggie tells the others to go and goes to open the bus door; Bob says they they should do it smart and go one at a time. Bob and Sasha work the door to let on at a time out; Maggie stabs the first one right away. Another drops  out and gets a knife in the face, number three goes down as well; the door is thrown open and all the walkers come out; Maggie is just watching as Bob and Sasha kill them all.

Maggie gets on the bus now after all the walkers; Maggie finds a walker on the ground struggling to get up and Maggie lets it free and then stabs it in the head. There is no Glenn, she sits down on one of the seats and starts to cry.

We now see Glenn laying on some sort of place with a gun; Glenn is still at the prison. He starts yelling for Maggie; Glenn then goes and opens the door behind him and is in the dark. Glenn turns on a little lamp and starts to make his way; Glenn is now inside one of the blocks and so far there is nobody. Glenn starts to check inside the cells; he goes to a bed and pulls out some heave assault armor. Glenn then lays on the bed and sees a picture of Maggie on his table; he holds the picture and cries. Glenn starts searching the room for more things to bring with him; he finds a knife under one of the beds. Glenn goes out in his full body armor and runs through all the walkers.

Glenn finds a girl sitting all by herself and tells her that her clips is full; he tells her that they should go. She does not answer him; she tells Glenn she was part of the invasion and he says he knows but needs her help. Glenn tells her to take the gun and he makes a molotav cocktail; throwing it at a car to attract the walkers.

Glenn tells her to stay close and that he can only try his best to cover her; the two starts running and shooting the walkers in their path. The two get away from the prison and are walking down the road and she mentions seeing her mother getting swarmed by walkers; she couldn’t believe seeing the Governor killing an old man. Glenn asks if it was Hershel and she says she is sorry; she explains that the Governor told them that the people at the prison were bad people. Glenn says he doesn’t want her help but needs it; he needs to find Maggie. Glenn explains she’s his wife, he got off the bus to help her but she didn’t see him; Glenn explains that Hershel was her father and all he said was to believe. Glenn says Maggie got out and she is going to help him find her; she agrees to it and a bunch of walkers make their way to them. Glenn takes a knife and stabs the walkers in the face; the girl joins in and helps him kill them. Glenn goes down and she is trying to help him, a walker comes out and the girl smashes its head in with the rifle. A bunch of guys get out of a truck and asks her what else they have.