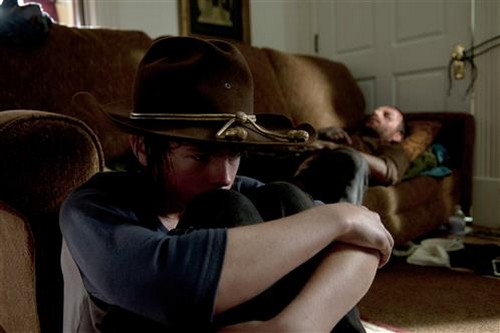 Tonight on AMC THE WALKING DEAD returns with all its gory goodness after a long hiatus. Tonight’s episode is called, “After” and it is is the mid-season premiere and that means there is going to be lots of action and we are going to be in for quite a treat.  If you happened to miss the last episode before the break, don’t worry. We’ve got you covered. Click here for a full recap of the last episode to find out what you missed!

On last week’s show just when everything started to calm down at the prison, Rick and his group now face imminent danger and destruction. This time, they might not win.  The Governor is coming back after him with his new group and a tank.  Tonight there will be an episode fight between the Governor and the gang inside the prison for control.  Some will fall and we may lose a favorite character.

So what can we expect for the rest of the season?  Carl will be the center of an entire episode (or at least provide the major character arc for a particular episode), Carol will return before the end of season 4, we’ll see more of Daryl Dixon, and . . . . A major character will die!

On tonight’s episode as Rick deals with old wounds, members of the prison have to come to terms with their new environment and ask themselves if survival alone is enough.

Tonight’s The Walking Dead Season 4 episode 9 Mid-Season premiere is going to be exciting, and you won’t want to miss it. So be sure to tune in for our live coverage of the new episode of The Walking Dead — tonight at 9PM EST! While you wait for our recap, hit the comments and let us know how know how excited your are for the mid-season premiere of TWD and what are you hoping will happen this season. Check out a sneak peek of The Walking Dead “After” below! Don’t forget to come back at 9PM.

RECAP: We now see a bunch of walkers surrounding a tank and all walking inside of the prison; we even see a close up of The Governor dead. Standing there is Michonne looking at the prison and all that is now lost; she starts to walk back and notices something burning inside. Michonne is walking there cutting off the head of any walker in her way; she gets over the barricade in the front and two zombies following her get caught. Michonne goes and cuts off the arms and jaws of the zombies and puts ropes around them; so she can walk around with her scent covered. Michonne finds Hershal’s head as a zombie on the ground and stabs it, making sure nothing of him is left as a walker.

Carl and Rick are walking down a long road; Rick keeps telling Carl to slow down but he doesn’t listen. Rick tells him to stop and that they have to stick together to find food and a place to stay for a while; Carl stops for a second and keeps moving not talking to him. Carl tells Rick to stay watch and let him do it since Rick can hardly walk properly; the two go in together with their gun pulled out.Rick finds the kitchen cleared and Carl goes into the next room; a walker comes out and Rick shoves the axe in its head. Carl then shoots it in the head and Rick tells him to never do that again because every bullet counts.

Michonne is now out walking with her two new walker friends and notices foot prints going up a road; she instead walks into the forest.

Rick and Carl are now out again walking, Rick keeps calling after Carl but he won’t answer; Rick catches up and the two decide to go into a house. Carl goes one way and Rick the other, Rick tells Carl to stop; Carl starts knocking on the wall and swearing. Rick tells him to watch his mouth and Carl tells him if there were any walkers they’d come out. Carl goes upstairs and checks the bedrooms while Rick is in the kitchen; Carl notices that there is a lot of cool things and then unplugs one of the wires and ties it around the door and Rick shoves the couch to the door. Carl reminds Rick of Shane and Rick tells him he remembers Shane every day; the two then just push the couch to the door completely. Rick offers Carl food but he says he doesn’t want any; Rick tells him to eat it any ways and goes to the washroom to looks at his wounds properly.

We now see a flash back of Michonne with two men, one a friend and the other her apparent lover Mike; the guys are going on about how this isn’t a life they should be having. They don’t know what to do, especially for their kids future; she then sees the two men without their arms sitting in their chairs and screaming. It was all a nightmare and Michonne wakes up.

Carl wakes up and notices his dad still sleeping, he gets off the floor and gets something to eat. He pours himself some cereal and starts to read a book, he then goes downstairs and finds his dad still sleeping. Carl calls for his dad but there is no answer; he kicks Rick’s shoe but he isn’t waking up. Carl starts shoving him but he won’t wake up, Carl starts yelling at him and walkers are now going against the door now from his voice; Carl goes outside and calls at the walkers. The walkers turn around and start to follow Carl; Carl takes them for a walk away from the house and starts walking backwards down the road. Carl walks to a forest are and a walker comes from behind.

Carl falls down and starts to kick at the walkers, he shoots one in the head and another ; they both fall on top of him. Carl shoots the third one but they are on top of him; Carl now struggles to throw them off and then throws up when he gets out; Carl puts his hat back on and picks up his gun. He tells the corpses he won and walks back on to the street.

Michonne is walking in the forest with her walkers on their leashes and follows a giant herd of them.

Carl makes it back to the house and tells Rick about killing three walkers, but he is still just laying there; he then goes on about saving Rick and mentions he still knows how to survive. Carl then tells Rick he doesn’t need him anymore and can take care of himself; he tells Rick that he could not protect anyone from the prison not even Judith or mom. Carl says now they are all gone because of him, they counted on Rick because he was their leader; Carl sits down and says that Rick is nothing.

Carl then says he would be fine if Rick died.

Carl has now left the house and is walking down the road, he finds another house and decides to go check it out; he pulls out one of the yards lights to use as a weapon first. Carl goes to knock the door down and falls down on the floor instead, he then just breaks the lock with his new weapon and gets inside to find food. Carl then goes upstairs, he start to look in the bedrooms and notices a dead bird in one of them. Carl then starts taking a little look into each room and closing the doors; Carl opens one up that has many walkers inside. Carl falls back and fires off two shots into the ceiling, Carl is out of ammo after hitting the walker in the face; it starts crawling after him and Carl kicks it away as he struggles to run. Carl gets into one of the rooms and unlocks the window but fails, he hits it in the head with a lamp and then almost gets his leg bit; he escapes barely and shuts the door.

Carl then writes on the door with chalk that a walker is inside and it got his shoe; Carl is on the roof of the house now eating some chocolate pudding from a can.

Michonne is in the forest with the walkers and looks like she is getting uncomfortable by looking at them all; especially this one walker that looks a little bit like herself. Michonne gets its head off and starts just chopping off the head of every walker around her and even her two on leashes as well.

Michonne has made her way backwards and notices the foot prints in the mud again; she then starts to follow them. Carl is back at the house and sleeping right on the floor next to Rick; Rick starts moving his hand a bit and Carl backs away thinking he might be a walker. Carl pulls out a gun and Rick hits the floor; Rick holds his hand out to Carl and Carl says he can’t do it. Rick calls out to Carl and tells him to stay safe and not go outside; Rick passes out again and Carl admits that he is scared.

Michonne walks into a bar which Carl and Rick were in days before; she finds the dead walker and then sits in a corner and says she misses Mike. She says that back at the camp it wasn’t him who did “it”, she says he was wrong because she is still here and he could be too; she says she knows the answer. Michonne then leaves the bar and cuts off the head of a zombie outside, Rick is now awake and tells Carl he should have rested because it is dangerous but it is good he found more food. Carl says he found more but he ate it, Rick asks what it was; Carl tells him it was 112 ounces of pudding. Rick says they will never get things the way they used to be, Rick says sorry and Carl says there is no reason to be. Michonne is walking down the street and finds an empty can of pudding laying on the road; she looks into the window and notices both Rick and Carl inside. Michonne knocks on the door and the two gets up; Rick then starts to laugh after looking through the eye hole and tells Carl it is for him.