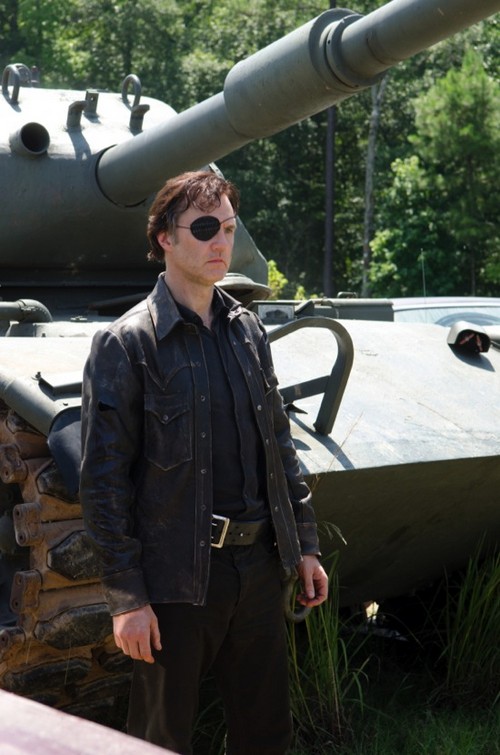 Tonight on AMC THE WALKING DEAD continues with all its gory goodness. Tonight’s episode is called, “Too Far Gone” and it is is the mid-season finale and that means there is going to be lots of action.  If you happened to miss the last episode, don’t worry. We’ve got you covered. Click here for a full recap of the last episode to find out what you missed!

On last week’s show the Governor was featured again and we did not get to see much of Rick and the gang.  The Governor was now hooked up with Martinez, his old henchman but it did not take long for the Governor to go back to his old ways and Martinez became zombie food.  The old Governor is back and during on of the last scenes in the episode he is outside the prison he sees Hershel and Michonne – remember the Governor hates Michonne and he was not pleased to see her.

On tonight’s show just when everything started to calm down at the prison, Rick and his group now face imminent danger and destruction. This time, they might not win.  The Governor is coming back after him with his new group and a tank.  Tonight there will be an episode fight between the Governor and the gang inside the prison for control.  Some will fall and we may lose a favorite character.

Tonight’s The Walking Dead Season 4 episode 8 is going to be exciting, and you won’t want to miss it. So be sure to tune in for our live coverage of the new episode of The Walking Dead — tonight at 9PM EST! While you wait for our recap, hit the comments and let us know how know how excited your are for the new season of TWD and what are you hoping will happen this season. Check out a sneak peek of The Walking Dead “Too Far Gone” below! Don’t forget to come back at 9PM.

RECAP: The Governor is talking to his new group of followers; he tells them that they need to do something but he doesn’t know how to talk about it. He wants them to survive; he says they wont last here because of the herd of walkers that will be coming. If they stay they will die; he tells them about the people who destroyed his old camp who live in the prison. They have tons of land for farming; we see how The Governor pistol whipped Michonne and pointed a gun at Hershel. The Governor mentions how how his two prisoners will help take over the prison without killing anyone.

Back at the prison Glenn is looking much better and says to Maggie that they should go on a vacation; Maggie tells Glenn about a time in her life when she went to a mountain with her dad and felt like she was flying. Maggie says she will get him some water. Rick tells Daryl what Carol did and Daryl wonders why they didn’t wait till he came back to decide; Rick tells him that she killed two of their own people. Rick tells Daryl she wasn’t sorry about killing the people; Daryl asks what to do about the two little girls. Rick says they will look after them, Rick doesn’t know how Tyreese will take it. Daryl says they should go find out. Bob is sitting by himself with a box; Sasha finds him and he tells her that she should be resting. Sasha says thank you to Bob because she wouldn’t be alive without him or Hershel; Bob says that it’s Hershel who did it and that she should stop thanking him. Sasha says he will let her thank him because he did help; Bob is walking away and tells her to go lay down since she isn’t strong yet. Tyreese tells Rick and Daryl to come see something; Tyreese shows them a rat that was dissected. A loud bang goes off and everyone runs outside. Rick sees a bunch of cars and a tank outside the prisons fence; The Governor calls Rick over for a talk. The Governor brings out Hershel and Michonne; The Governor tells Rick to come down and talk once again.

Rick looks to Daryl and the two nod at each other; Rick then opens up the gate and walks on over to The Governor. Daryl says they should go around from the back in case things go South; needing to wait as long as possible. Rick tells The Governor to let go of Michonne and Hershel; he will stay if they leave. The Governor says that Rick and his people have till sundown to go or they will die; he says they need the prison. Rick tells The Governor that they have children here and they wont survive; The Governor tells him that there is nothing else to talk about with his tank. Daryl starts moving over some guns; he hands one to Bob and the others. Back at the camp Lily is sitting on a chair and notices something in the forest across the lake; a walker gets into the water and is walking on over; Mehgan calls for her mother who found something heavy. Lily takes out a pistol and watches the walker trying to cross the river; but the current takes him down. Mehgan is trying to lift this big heavy thing and does so; she wipes it off and finds letters saying “Warning: Flash Flood Area” The ground starts moving and a walkers hand comes out from the dirt and grabs Meghan; she starts screaming and Lily is rushing on over but Mehgan gets bit.

The Governor says if he shot at them then they’d shoot back though they would lose horribly; Rick sees some walkers coming over. TheGovernor pulls out a gun and shoots them in the head; he says the longer they wait the more will come. Carl says he’s a good shot and could hit The Governor but Daryl tells him to trust Rick. The kids are running and Lizzy tells them to be strong like Carol and grab guns; Rick says they could all just live together and that they have enough room. The Governor says that they would not be comfortable together; Rick says that it could work with the different cell blocks. The Governor says it can’t after Woodbury and what happened to Andria; Rick says it wont be easy but it isn’t harder than having to shoot at each other. Rick tells The Governor that they are not leaving; the gun shots will bring more walkers and bring down the fences. Rick says they can all live inside the prison or none of them can; The Governor takes a sword to Hershel’s neck; Rick asks if this is whatthey truly want. Rick tells them that they just have to put down their weapons and come inside to be one of them; Rick says they can let go of the past and no one will have to die. Rick says that they have made it this far but they can always come back from our bad deed because they are not too far gone. Rick says that the can all change; The Governor calls him a liar and kills Hershel with slicing his neck. Michonne rolls away from them and Rick gets shot in the leg. The Governor takes a bullet to the arm. Hershel is on the groun still moving; The Governor goes and cuts him up even more. The Governor chopped off Hershel’s head, Lily comes over with Mehgan’s corpse; The Governor picks her corpse up and shoots her in the head.

The tank goes through the fence and all the cars drive in. The Tank is shooting the prison; ob tells them to run away; Maggie tells Beth to get on the bus and to leave without them. Rick jumps out on The Governor and starts punching the hell out of him; Maggie runs in and rushes Glenn out. Rick is beating the hell out of TheGovernor. Beth left for Judith as Maggie and Glen arrive; Maggie runs back out to find Beth. A walker is closing in on Daryl from behind as he shoots at the people; The Governor is beating up Rick on the ground. The walkers are now running over; Daryl takes the walker as a meat shield and throws a grenade at the people. Bib gets hit in the shoulder; he tells them to look for an exit wound. Maggie helps Bob and Sasha goes with them to the bus. Tyreese take cover behind some pots and is being shot at by several guys. Lizzy comes out with a gun and shoots two peopel; Tyreese is shocked at what they did and tells them to get out of there. The Governor and Rick are going at it; The Governor is choking Rick to death. Michonne comes from behind with a sword and stabs The Governor in the back.

Daryl takes a grenade and throws it down the tanks barrel and blows it up; Beth runs out and Daryl tells her they have to go. Rick is screaming for Carl; Rick then sees some walkers that Carl shoots in the head. Rick walks on over crying and hugs him; Rick asks for Judith and Carl says he doesn’t know where she is. They find a baby carrier without Judith inside; Rick starts crying. The two are now crying together and both walk off. Walkers are just swarming into the prison and The Governor is on the ground ding; Lily walks over to him with a gun and shoots The Governor in the head. The prison is on fire and several walkers are swarming over; Rick and Carl have left not looking back.