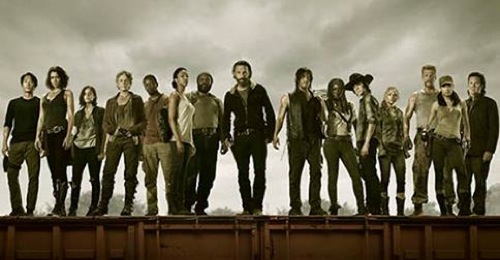 On the season 3 finale episode of Talking Dead, the special celebrity guests were Norman Reedus, Emily Kinney, and JB Smoove. Did you watch the last episode? If you missed it, we have a full and detailed recap right here for you.

This week on Talking Dead joining Chris are Scott M. Gimple who’s the showrunner of The Walking Dead, Greg Nicotero who’s a well-known special effects creator and Conan O’Brien who is a comedian and a Late Night Host, Tonight’s guests will discuss the evening’s proceedings and take your questions live.

Talking Dead airs tonight, at 10 PM ET on AMC after The Walking Dead. While you wait for the recap, Celeb Dirty Laundry offers a live recap of tonight’s The Walking Dead Season 5 Premiere, “No Sanctuary”, right here.

Chris Hardwick introduces Greg Nicotero, Scott Gimple and Conan O’Brien as his guests tonight. Chris says that he tried not to be shaken at the crack and slash at the tub, Conan says that was very tough to watch but was impressed but how clean they were with it all. Scot explains how these guys were just messed up, they had no emotion for anything they do; it proves how these guys have totally accepted what they must do.

Greg mentions how the scene was fun to film, they made it super realistic this time. Chris says this was one of the most action pack and bloody season opener ever. Scott mentions that they put flash backs to prove that Gareth used to be just like the group, Conan says he hates Gareth since he’s the first hipster in the apocalypse and he wants to smash his head in.

Chris says he loved seeing Rick go from farm to stone cold killer, Greg says that he’s on a mission to repay all of Terminus for the cruelty they have done. Chris asks if the termites deserved their fate, Conan says that they must all die and he wanted to go into the TV and help kill them. Conan says that he’d eat human instead of being beaten to death any days; he then run away. Conan says he’d wear a speedo and make himself very unappealing to nobody would eat him. A caller named Morgan asks Greg what moment he’s most proud of, he loved the walker eating the nose off. Chris loved all the gore in this episode, Greg says that special effects are getting better now; they keep mixing up their mediums so nobody can figure it out. Conan wonders what kind of nightmares Greg has to make these amazing deaths, he’d love to crawl into his mind.

Chris says he was really happy to see Morgan back, Scott says that it was pretty well put together and that he was going to Terminus; maybe wanting to get back together with people. Greg says Morgan is a great character and fans love him. Chris says his mom is so confused about Beth, Scott says that she’s not happy over where she is now and that things won’t be going well. Conan loves the killing Rick instead of the whiny one. Scott says that Rick is grounded and knows he must kill to protect those he loves and he’s accepted that fact of life now.

Scott says that Carol did not need to save the day to get back into the group, she has done a lot for the group but this really took away the awkward tention between them; though Rick would surely have let her back in either way. Conan was amazed that Carol knew not to just walk into Terminus, then killed them off like it was just another day at work. Conan wasn’t surprised about letting the walkers feed on the woman, he would have done the same. Conan also mentions that he loves it when you have someone with so much evil get justice served to them, when Tyreese beat the crap out of the guy in the cabin was the perfect example.

Conan says he’d use a television award to kill zombies in the apocalypse, they are sharp and he’d saw his hands off then attach emmy’s to his wrists and kill them all. A fan asks how hard it is to write in the voice of other characters, Scott says it’s not easy at all but when you love the characters so much then it just comes to you.

WE now see a clip of next week, someone is calling for help and Carl tells Rick to come to see who is in need of saving. Chris asks who that was, Greg says it was Father Gabriel and is a character from the comic book; Scott says the season is going to be going in and out of the comics a lot and many new threats will rise.