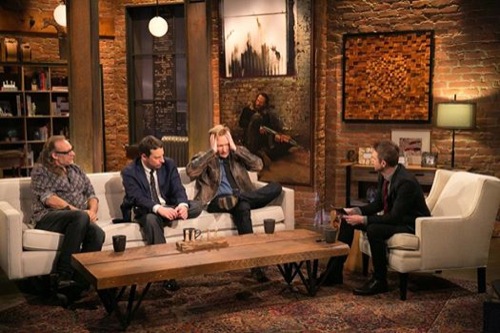 On the last episode of Talking Dead, Chris’s guests were Scott M. Gimple who’s the showrunner of The Walking Dead, Greg Nicotero who’s a well-known special effects creator and Conan O’Brien who is a comedian and a Late Night Host. Did you watch the last episode? If you missed it, we have a full and detailed recap right here for you.

This week on Talking Dead joining Chris are Chad L. Coleman who stars in The Walking Dead as Tyreese and Matt Jones who’s well known for playing Brandon “Badger” in Breaking Bad. Tonight’s guests will discuss the evening’s proceedings and take your questions live.

Talking Dead airs tonight, at 10 PM ET on AMC after The Walking Dead. While you wait for the recap, Celeb Dirty Laundry offers a live recap of tonight’s The Walking Dead Season 5 episode 2 “Strangers” right here.

Chris introduces his guest Chad Coleman who plays Tyreese on the show and Matt Jones who was in Breaking Bad. Chris asks Matt what his reaction to the Bob BBQ, he honestly was relieved to be honest and now they knore exactly what these weird Terminus people are actually doing. He also says that Terminus people, Chris asks him how hard it would be for him to eat people. Matt says he’d be skeptical but after a little taste it might be okay. Chad says that people taste like chicken. Chris says last week Tyreese finally got his groove back, though tonigtht they saw the guy he beat up was still alive at the camp fire.

Chris asks Matt about his opinion about Gabriel, he is really surprised how Gabriel is still afraid of zombies with practically two years into the apocalypse; he must be hiding something. Anything not normal is dangerous, he doesn’t trust him completely. Chris asks how hard it is for the group to trust new people, Chad says that it’s way too hard now; they can’t trust anybody no matter what. Chris asks if Gabriel was ready to die, Matt believes he was ready to give up; he just spread his arms out to let the walker get him. Chris asks if Tyreese agrees to Gabriel’s take on violence, Chad says he cleerly does but knows that realistically it’s not possible to do no violence in the world they are in. Matt decides that his favorite scene was when Carl shot Shane, he just really wanted him to die; Matt loves when the bad guys get killed.

Chris asks Matt if Maggie should forgive Tara, he says it’s a miracle that she would ever forgive a person who pretty much helped to kill her father; in a church it showed how religious the forgiveness was. Chad says there is a possibility of community their and everyone should be together, he believes Tara was just swept up in the Governor’s plans but didn’t know all that would have happened.

Chris asks about the celebration scene and how rare it is to see everyone smilining, Chad says that the world is so weighty and hard for everyone to truly feel so good about this. Matt says that it reminded him of Saving Private Ryan, where they get a little break from the fight for once in a church; Matt also says to stay next to people all the time and not go out alone. A caller calls and asks if Tyreese could only save Judith and Sasha who’d he choose, Chad says he can’t pick because Tyreese woudl sacrifice himself for the two.

A fan from the audience named Steven comes up and asks what Tyreese would do different if he left the group, Chad would stick to his guns of no violence but only when it was truly needed; though if nobody wanted his views then he’d go to and island. Trying to rebuild a community on an island, Chris gives Steven a plastic foot like Bob’s. A fan asks Chad if what happened with Lizzie helped Tyreese to understand her actions at the prison, Chad agrees it did because it made him realize how hard it must have been to do and how it could be a good thing. Someone asks Matt how Walter White would be in the apocalypse, Matt says he’d me like the Governor without a doubt; there was no way he’d wouldn’t become a brutal leader. A caller asks if Carl respects Rick more in beast mode, Chris really believes he does; though thinks Carl is so much nicer and Matt says Carl is Rick’s little voice of reason.

Chris asks if it is worth to go in a basement of walkers for canned food, MAtt says it’s crazy how everyone is afraid of walkers but not infections because of how gross that water was. Chris asks the worst case scenario walker for Chad, Chad says someone he knew personally. Matt says a zombie elephant would be scary and his mom as a walker riding it would make him even more sad. Chris asks who is most appetizing to the viewers, everyone is voting for Chris and he is the most appetizing tonight. Matt says they can eat his stomach and love handles, Chad says that they can eat his butt. A fan asks how Matt would kill a walker, Matt says he’d stab him in the face with anything; he’d even use a pillow.

We now get a sneak peek of next week, Sasha is in the forest looking for Bob; she closes her eyes and notices a mark on a tree. She hears a foot step and notices some walker behind her, Chad says that all he knows that Tyreese is going to try hard to keep his humanity and do what he does best.