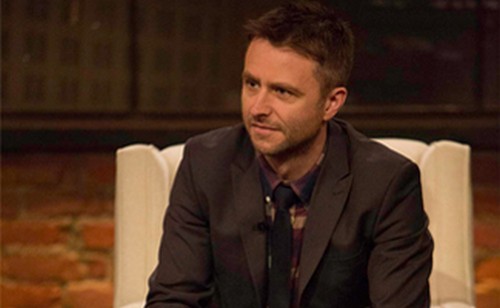 On the last episode of Talking Dead, joining Chris were Chad L. Coleman who stars in The Walking Dead as Tyreese and Matt Jones who’s well known for playing Brandon “Badger” in Breaking Bad. Did you watch the last episode? If you missed it, we have a full and detailed recap right here for you.

This week on Talking Dead joining Chris are Mary Lynn Rajskub who’s well known for her role as Chloe O’Brian and 24 and Slash who’s a well-known musician. There is also going to be a surprise Walking Dead cast member stopping by.  Tonight’s guests will discuss the evening’s proceedings and take your questions live.

Talking Dead airs tonight, at 10 PM ET on AMC after The Walking Dead. While you wait for the recap, Celeb Dirty Laundry offers a live recap of tonight’s The Walking Dead Season 5 Episode 3 “Four Walls and a Roof” right here!

Tonight Chris Hardwick introduces their guests Slash, Mary Lynn Rajskub and Andrew J. West who was Gareth on the show. Chris says that it was surprising to see Gareth die so early in the season, Andrew says that it has been a strange but wonderful surprise; he auditioned for the season 4 finale. Scott told him to come in and that he’ll be playing this leader and a cannibal; Andrew says when he finished and had no idea he’d comeback. He was so excited to come back when he got a call, though he knew he’d be dying three episodes in; Chris asks what they were actually eating. Andrew says that it was just pork, Chris asks who he though Gareth was before the apocalypse and says it would be a barista with anger issues.  Chris asks if Slash had any redeeming qualities to him, Slash said he wanted to like him a lot but knew he’d be a character we’d end up hate. Mary says that he’s like a serial killer who girls find really hot. Chris asks what they thought about eating an infected person, Slash says he has no clue that if it  can be cooked out. Mary was sad to see Bob go but even sadder to see Gareth go because she felt he could have been talked out of being evil.

Chris reads a lot of how Gareth is so hot but why he has to be a cannibal, Chris asks what the massacre in the scene like; Andrew mentions that they didn’t think Rick and the gang would be coming back so quickly. They wanted them to seperate and not think correctly, but it back fired completely. In the premiere Rick said he was going to kill Gareth with a machete and followed through with that promise, Andrew beleives it shows how Rick follows through with his promises. Andrew wonders how the main group will react with their own savagery now, Slash mentions that Rick is completely done with dealing others and is going to get rid of any threats instead of talk to them.

Chris gets a fan to come up from the audience named Patrick who asks what Andrew’s favorite moments from the set, Andrew said when he worked on his first day he noticed seeing two people dressed up as walkers and they were just smoking cigarettes and eating apples; it was amusing to him. Chris gets up and gives Patrick a finger to take home. Chris asks how Mary felt about what Gabriel did, she really wanted to hang her hat on the fact he was so spiritual though felt he was pretty bad; Chris feels like if someone is too much of something than they are hiding something. A caller asks if Gareth would have eaten his own brother, Andrew says that he honestly would and it’s because he was so detached to people; even his own brother was just another average human being.

Chris says he was uncomfortable seeing the group separate, though they have such an amazing group at the church. Chris asks if Glenn, Maggie and Tera should have went with the group; though Mary felt it was weird that they really did that this time around. Chris says they don’t have a good idea what’s happening outside of this group, they are so enclosed. Chris asks Andrew how would the world would react to cannibals if it went back to normal; Andrew believes there would be some horrible things in this world that they’d have to just forgive these horrible actions. Andrew mentions that he always felt in control and maybe even talk himself out of the situation; though Rick shot his fingers off. Andrew says that Andrew Lincoln is a very nice man, but when he got into the role he’s very scary and intense. Chris asks who was with Daryl at the end, Mary says that it’s either Beth or someone else, Chris believes it could be Morgan or another guy. Slash believes that Rick is the voice of reason in the group, he now knows how to deal with people. Chris asks how Andrew would do in the apocalypse, Andrew says he’d do better now having a little experience on the show; though sadly he didn’t get to kill many.

We now get a sneak peek of next weeks episode, we see Beth open up her eyes  and a clock ticking, she gets up from her bed and has a cut on her face. She looks outside and then goes to knocking on the door.

Andrew is asked why they didn’t grow veggies instead of eating leggies, he mentions they did grow vegetables. Chris asks if he defends his characters sometimes when told he’s bad, Andrew admits he tries to say he’s misunderstood but he never wins.