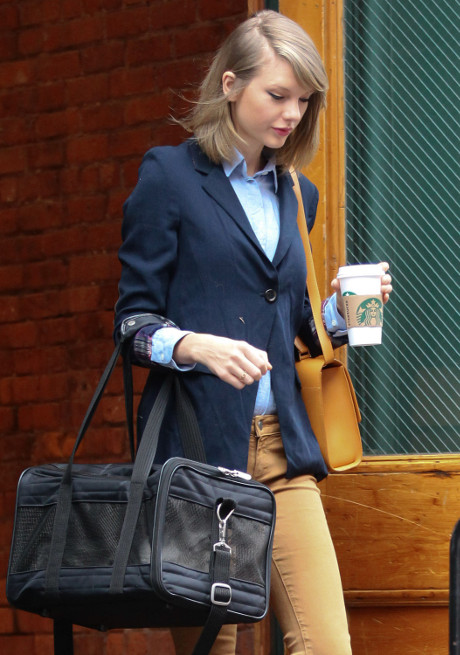 Taylor Swift and her adorable cat were spotted leaving her NYC apartment yesterday, and we have to wonder whether or not T-Swift, who’s become infamous for her romantic life, has given up on the whole dating scene. She’s not shy about admitting that she finds inspiration for her popular songs in past romantic experiences . . . but her romantic prospects are looking a bit bleak and we have to wonder if she’s just decided to adopt a cat lady lifestyle. Would you listen to Taylor Swift’s songs about furry, feline companions?

What do you think about Taylor Swift taking a break from the dating game? Do you think it’s good for her? She recently called it quits with Snapchat founder Evan Spiegel, who apparently didn’t see Taylor for the amazing woman she is. A source tells OK!, “Evan got [turned off by Taylor’s] neediness. In the end, Taylor just couldn’t deal with the fact that she wasn’t a priority in his life.”

The two reportedly met at a party in December and, even though things were going slow, Taylor thought he was THE ONE TO PUT A RING ON IT. Guess not.

Whatever really happened between the two, you can be certain Taylor has a song about it (we can’t wait for all the glorious Snapchat references in her next album)! Check out Taylor and her new lifestyle choice below.