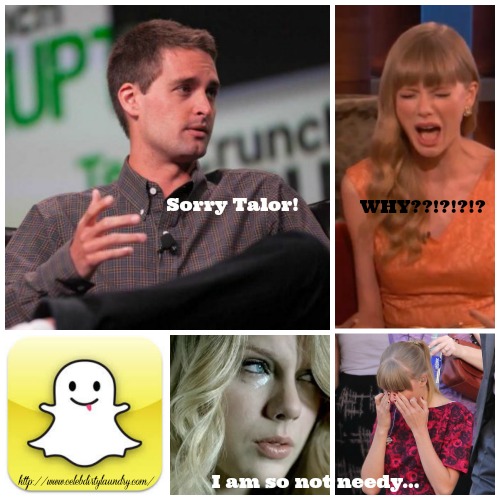 Has Taylor Swift already been dumped by her new boyfriend, Snapchat founder Evan Spiegel? According to a new report from OK! Magazine, Taylor and Evan started getting serious after meeting at a party in December. Even though they were taking it slow, Taylor apparently thought that Evan was ‘the one’.

Alas, he didn’t agree with her. A source tells OK!, “Evan got [turned off by Taylor’s] neediness. In the end, Taylor just couldn’t deal with the fact that she wasn’t a priority in his life.”

I suppose the fact that Evan had a serious long-time girlfriend had nothing to do with it? Evan had reportedly been dating Bachelor alum Lucinda Aragon for sometime now, even after the Taylor rumors started to kick up dust. If Taylor and Evan had anything going on, it was brief and more than likely a fling rather than a serious relationship.

However, with that being said, I totally buy that Taylor probably got super clingy really fast, and started hounding Evan for a date. He may have flirted with her, and heck, they may even have kissed at that party. But if this report is accurate, Taylor thought there was a lot more to their relationship than there actually was. But even then, how can Evan ‘dump’ Taylor when they’re not dating in the first place? This just seems like another attempt to create the jilted lover image for Taylor, when in reality, she’s probably doing just fine. In fact, she’s probably already set her sights on her next conquest.