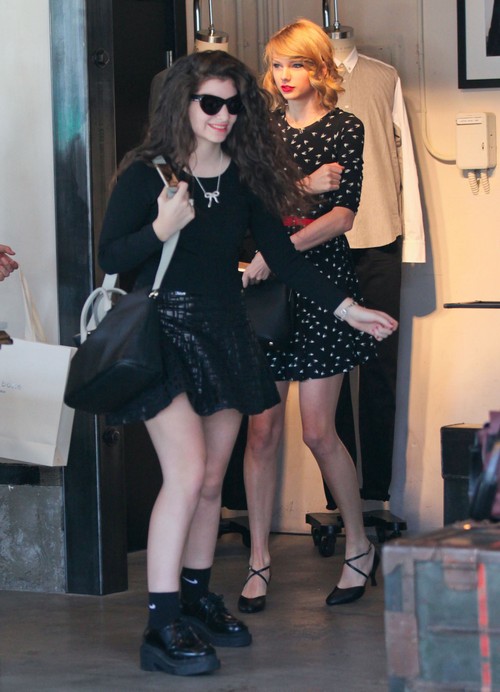 Taylor Swift and Lorde are total BFFs, especially with Selena Gomez hooking up again with Justin Bieber, but Hollywood Life has decided to take that one step further and suggest that they’re lesbian lovers, despite absolutely no proof to back up their claim. Can’t two girls be friends without a suggestion of something else going on? Apparently in Hollywood, they’re either lovers or mortal enemies, without any sort of in-between.

Anyway, Kiss FM’s Kyle Sandilands interviewed Lorde recently, and was basically just the worst interviewer ever. He asked Lorde about her relationship with Taylor, saying, “I see you guys [in] pictures everywhere. Are you guys together now? Not together as in lesbians, I’m not talking about ‘Ellen together,’ I’m talking about, like you guys are friendly right?”

Obviously, Lorde for irritated and replied with, “What do you mean you’re not talking about ‘Ellen together?’ Is there something wrong with lesbians?” Then, Kyle decided to make things worse by asking, “Oh my god no, I would love that! Are you going to confirm now you’re in a lesbian relationship with her?” However, Lorde refuses to take the bait and just tells them not to even ‘try it’.

Seriously, what are the interviewing standards for Kiss FM that this guy was even given permission to interview Lorde? What the heck are these questions? Lorde is obviously [and understandably] irritated and angry at these idiotic questions, and not only are they broad and stereotyping, but they’re clearly meant to get a rise out of Lorde. And then of course, Hollywood Life goes and makes it worse by suggesting that Lorde and Taylor are in a lesbian relationship. Where in that interview did she even hint at that? Just because she’s asked about it doesn’t mean it’s true, as they should well know by now.