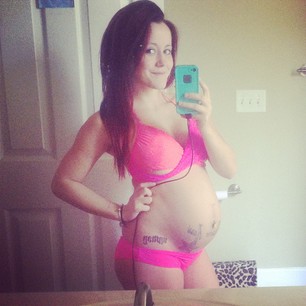 When her baby-daddy is locked away, Jenelle Evans will play! Teen Mom 2’s Jenelle Evans’ current boyfriend Nathan Griffith was thrown in jail on April 9th to serve a thirty day sentence for his DUI fiasco last fall. Nathan Griffith is an unemployed jailbird just like the rest of Evans’ previous boyfriends, but he seemed to keep her on a much tighter and less trashy leash than say-Courtland Rogers. Don’t get it twisted she still got arrested and was alleged to be smoking weed while she was pregnant and with Griffith, but it was a slight step up from her previous relationships.

We mentioned yesterday that it was only a matter of time before Jenelle began resorting to her old trashy ways since Nathan Griffith is behind bars and unable keep in her check. And, it looks like we were right. The reality star is currently 7 months pregnant and she posted a nearly nude and “sexy” photo of herself in a bikini that is WAY too small on her. Jenelle shared the photo of herself in a hot pink bikini today on Instagram. The bottoms barely cover her because she has obviously put on a few pounds since the pregnancy. And, we’re not exactly sure what is going on with the top of the bathing suit. Is it too small or ripped? You can decide that for yourselves.

Jenelle has been posting baby bump pics on social media throughout her pregnancy, so the 29 weeks progress pic is expected. What is troubling and horribly predictable is the fact that Nathan has only been in prison for four days and she is already posting practically nude photos on Instagram. If Griffith were out of jail Jenelle wouldn’t even consider posting such a trashy and revealing pic of herself on social media.

What do you guys think about Jenelle’s latest baby bump picture? Was it way too trashy for a mother to be? Do you think she would have posted it if Nathan Griffith wasn’t locked away in Horry County Jail? Let us know in the comment section below!