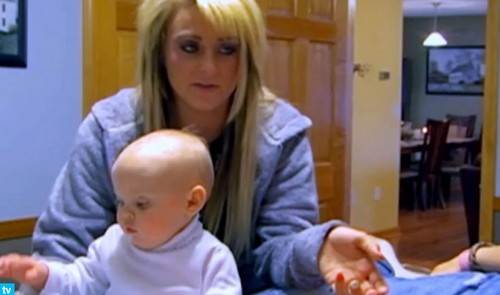 Tonight on MTV season 5 of TEEN MOM 2 returns with another new episode. Tonight’s episode is called “Overload” and on the episode Leah starts taking medication to deal with her anxiety; Kailyn and Javi visit Joe and Vee’s apartment; and Chelsea meets with a lawyer.

On the last episode Chelsea moved into her new house; Kailyn invites Jo and Vee to Isaac’s birthday party; and Leah struggled to balance her work and family life. Nathan had to turn himself into jail soon, leaving Jenelle worried about the future. Leah had a difficult time trying to work while being a mother. Kailyn decided to invite both Jo and Vee to Isaac’s birthday celebration. Did you watch the last episode? If you missed it we have a full and detailed recap right here for you.

Tonight’s Teen Mom 2 season 5 episode 16 is going to be exciting, and you won’t want to miss. While you wait for our recap, hit the comments and let us know how excited you are about the the new episode of Teen Mom 2.

Tonight on Teen Mom 2 Leah begins taking anxiety medicine; Kailyn and Javi visit joe and Vee’s apartment; Nathan gets ready for jail; Jenelle worries about being alone and Chelsea meets with a lawyer.

Tonights episode begins with Jenelle and Nathan spending some QT at a friends BBQ. It’s 2 days before he has to report to jail and Jenelle is worried about being alone. She tells her friends she is going to try to keep busy with school, the baby and work. She’s also worried about how Nathan’s state of mind will be while he’s locked up. Their friends tell Nathan to do his time and come out and be the man he needs to be for his family.

Adam and Taylor take family pics with Aubrey and his new baby while Chelsea takes time to get her new house in order. She gets a visit from her dad who talks to her about getting a lawyer to fight the allegations the state is making about her working without a license. All the legal talk eventually leads to Adam and his legal woes after getting in a car wreck. Chelsea’s dad says she should hold off on dealing with Adam and his problems and deal with hers first.

Joe and Isaac bond over some ice cream when they get a call from Kailyn who is curious as to why he and Vee didn’t show for Isaac’s bday party. Joe doesn’t really give an answer but says it would’ve been weird. Kailyn then proceeds to ask if she can come over to their place just to see where Isaac is living when he’s with Joe and Vee. Joe has no problems but says it may be an issue with Vee. Kailyn eases his worries and says she’ll do the grown thing and reach out to Vee about it.

Leah who is under a lot of stress says she finally saw a doctor who put her on some meds. She meets with a friend but gives her a disclaimer about being a bit groggy since she hasn’t adjusted to the medicine. She explains that she’s mad because she just stays up thinking about all the problems with Allee, the wheelchair, medical bills and getting a new house. She feels guilty about freaking out about everything because she wants to be the best mom she can be for her kids.

Adam and Taylor take Aubrey and Paislee to lunch to meet with a friend. Aubrey has a fit when Adam tells her she can’t play on the phone. Adam steps into his father role and takes her outside and calms her down. He rejoins everyone at the table where his friend asks him about his court battle with Chelsea to get more time with Aubrey. Adam says Chelsea is trying to use his legal problems against him to keep him from getting more time with Aubrey. Adam says he’s just gonna keep fighting in a positive manner and he’s devoted to staying sober and on the right track for his family.

Jenelle and Nathan spend their last day together before he reports to jail lying in bed talking. Jenelle tells Nathan it sucks and all she can think about is how he won’t be there with her for the next 30 days. Nathan says the worst part is that he’ll miss seeing her belly grow. Jenelle reminds him that the most important this is that he won’t miss Kaiser’s birth and that he won’t be able to talk to other girls in jail. They bond and tell each other how much they already miss each other.

Kailyn talks to Javi about being home alone with both kids when he goes out of town for work. She mentions to Javi that before he leaves she wants them both to go to Joe and Vee’s apartment to see where they live. Javi says he’s shocked that she’s willing to work things out with Vee since they’ve haven’t been able to get along in the past. He says he’s glad she’s in a a happier place and wants to do the right thing. She says she is doing it for herself, Isaac and for Joe so everyone can be happy and move on with their lives.

Leah meets Cory to pick up the girls. Cory tells her the insurance company isn’t giving him much to go on when it comes to Alles’s wheelchair but Leah insists that he needs to be more aggressive. She tells him that if its too hard for him she will call herself and make sure they get the message. She says they need to speed up the process since Allee has a rare disease and since she’s dealing with a lot of anxiety because of everything. Cory doesn’t say much and just drives off leaving Leah looking confused.

Chelsea meets with a lawyer to talk about fighting the Department of Labor. The lawyer says the commission received a complaint and that they have a right to investigate it. He says the majority of their evidence is from social media but doesn’t really show that she was paid for her job. He says the next step is to write a letter and to resolve the issue but says they can deny her requests and deny her a license which would lead to a hearing. She tells the lawyer she is in limbo until this is resolved but her lawyer tells her that the whole process could take a month in the best case scenario. Chelsea is bummed because that means she can’t work and has a new house and a daughter to worry about.

Joe and Vee play with Isaac as they talk about Vee’s text conversation with Kailyn. She reads Kailyn’s text to Joe which was a nice text about coming over and Vee says she literally looked out the window to see if hell was freezing over and pigs were flying. Joe laughs and then Vee says she asked Kailyn to do dinner and she says Kailyn says they’ll figure it out. Joe says it shows people can change but they will take it one step at a time and that it will be a little weird because they’ve all never been in the same room together in a social situation. They both agree that Javi will be the most uncomfortable. Javi and Kailyn arrive at their apartment and Isaac is super happy to see Kailyn. He shows her his room which he cleaned just for her. She introduces Javi to Vee and they all bond in Isaac’s room. The head to the living room where Kailyn tells them she likes their place. Vee asks Javi how it feels to be a daddy and he says it’s great. Kailyn asks Isaac if he’s happy that their all together and he say’s yes. Javi gives them an invitation to come to Delaware to come see their home. They all decide to go to eat and Kailyn apologizes for begin so mean and not getting together with Joe and Vee sooner.

Leah is at work but is feeling really drowsy because of her meds. She calls Allee’s physical therapist but can barely keep her train of thought because she’s so tired. She asks her what they should do about Allee’s wheelchair because the issuance company doesn’t want to approve it because she’s not old enough to determine whether she needs it or not and Cory isn’t pushing the issue because he’s not a big fan of the wheelchair in the first place. She also talks to the therapist about Allee’s awareness of her disability and asks what she should tell Allee. The therapist tells Leah its up to her and Cory about what they wanna tell her but suggests that if Allee is smart enough to ask about it they should tell her whats going on and maintain an open line of communication. Leah begins to slur her words and fall asleep on the phone leaving the therapist confused as to what she is talking about. She tells Leah the phone is breaking up and she can’t understand her and Leah apologizes and says she’s just tired and they hang up.

Chelsea gives her dad an update on how her meeting with the lawyer went. She says he;s confident that it will all work out but that it’s frustrating because she can’t work. Then she realizes that even when its all settled that she still doesn’t even know if she passed her test and that she could’ve failed.

Jenelle and Nathan prepare for court and for Nathan to report to jail. Nathan says he’s just worried about Jenelle because she’s just been crying for the last couple of days. He promises her that everything will be ok, they get into the car and drive to court. Nathan tells he he doesn’t think about it because it just give s him anxiety. They meet up with their lawyers  in the parking lot where Nathan makes a last ditch effort to make a deal for supervised probation and the lawyers tell him there’s no way and he’ll have to serve the 30 days. So, they head into court to face the music.

Leah is at home with Jeremy and the girls when she starts to cry about how her medicine is affecting her. She says just feels messed up and like she’s on drugs. She says she feels really weird and she’s freaking up. Jeremy says she should call her doctor to change the dosage. She starts to cry and says she doesn’t know what to fro because she needs the medicine but it makes her feel so bad. She asks Jeremy to support her and to be there for her because she just wants to be a better wife and mother. Jeremy reassures her that he there for her.

Kaily, Javi, Joe, Vee, Isaac and Lincoln go out to dinner. They gush over Lincoln and Kailyn predicts that they’re next to have a little one. Joe and Vee both agree that they aren’t ready for a baby yet but they agree that the dinner was nice and that they should’ve done it a long time ago and continue their meal as one big happy family.

On the next Teen Mom 2 Jenelle takes Jace to her house alone but gets frustrated, Kailyn celebrates her bday but there’s a problem with Lincoln, Chelsea finds out Adam was driving when he’s not supposed to be and Leah and Jeremy argue.