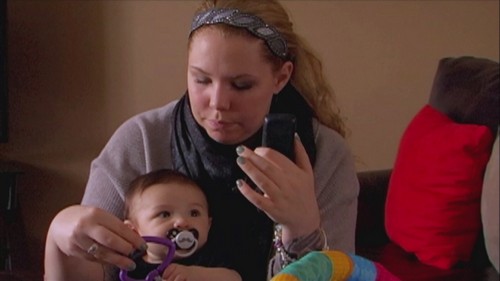 Tonight on MTV season 5 of TEEN MOM 2 returns with another new episode. Tonight’s episode is called “Harder Than it Looks” and on the episode Jenelle struggles to take care of Jace while Nathan is away.

On the last episode Leah began taking anxiety medicine; Kailyn and Javi visited Joe and Vee’s apartment. Jenelle and Nathan prepared for court and for Nathan to report to jail. Nathan was worried about Jenelle because she was crying for a couple of days. He promised her that everything would be ok. Kaily, Javi, Joe, Vee, Isaac and Lincoln went out to dinner. They gushed over Lincoln and Kailyn predicted that they’re the next to have a little one. Joe and Vee both agreed that they aren’t ready for a baby yet. Did you watch the last episode? If you missed it we have a full and detailed recap right here for you.

On tonight’s episode Jenelle struggles to take care of Jace while Nathan is away; Leah and Jeremy disagree over finances.

Tonight’s Teen Mom 2 season 5 episode 17 is going to be exciting, and you won’t want to miss. While you wait for our recap, hit the comments and let us know how excited you are about the the new episode of Teen Mom 2.

In tonight’s Teen Mom 2 “Harder Than It Looks” Jenelle struggles to take care of Jace while Nathan is away; Leah and Jeremy disagree over finances; Chelsea looks into Adam’s legal charges and Kailyn celebrates her birthday.

Tonight’s show starts with Chelsea picking up Aubrey from Adam’s parents. She asks Aubrey about who drove her around and she says Taylor but Chelsea has a hard time believing her. Chelsea confides in the other Chelsey about her fears that Adam is driving and risking his freedom. She doesn’t understand why he won’t communicate with her about his charges so she says she asked her dad to look into it. Kailyn is in Pennsylvania getting her hair done for a bday dinner with her friends later that night. Her friend and hairdresser asks her about her relationship with Javi and about how the night went with Joe and Vee. She tells her that it went great and that she loves Vee and that it feels so much better to not hate her. She says she just wants to make amends with everyone in her life because life is way to short to hate. Kailyn then tells her friend the only thing she has to worry about tonight is feeding Lincoln before they go out so she doesn’t have to worry about drinking.

Leah and her cousin take the girls for ice-cream. Leah tells her cousin she feels better now because her doctor finally lowered the dosage of her anxiety medicine. She also tells her it’s a good thing she has it under control because she and Jeremy found a buyer for their house and they have to move out soon. She says they will move into a 2 bedroom apartment until they can find a house which will help them save money since they have so many medical bills. She complains about how thrifty Jeremy is and wants to find a way to make her own money. Her first venture will include selling makeup which involves spending $1800 to buy the starter kit to which her cousin responds “you have to spend money to make money.” Jenelle goes to her mom’s house to pick up Jace for the weekend. She tells her mom how the court date went with Nathan. She says Nathan apologized and the Judge accepted his plea and sentenced him to 30 days. She tells her mom she gets sad and lonely because she has to do everything on her own but Barbara tells her sometimes being alone is a good thing. Barbara reminds her that it’s the first time ever she’ll be taking Jace alone without Nathan and that she should just focus on that.

Kailyn is still at the hairdresser where Javi walks in without Lincoln. Kailyn is upset because she planned on Javi bringing Lincoln so she could feed him before she goes out but now she has to go pickup Lincoln herself which throws a monkey wrench in her plans. Javi doesn’t know what to say so he just tells her that he hair looks good to which Kailyn responds “Javi shut up and get out.” Jenelle arrives home with Jace and puts him to bed since it’s late. She goes to let the dogs out only to find that the dogs have pooped all over the house. She tries to get them outside but they aren’t cooperating which makes Jenelle super angry. She finally gets the dogs in their cages and is left to clean up poop.

Leah and Jeremy are home alone with Addalyn while the girls are with Cory. Leah is packing up with house and she tells Jeremy she feels better and a lot more settled since she is on the right dosage of medicine. She also tells Jeremy the move is better for Allie and her condition since they’re moving closer to her doctor and the apartment is wheelchair accessible. Jeremy tells Leah she needs to call Cory about the wheelchair but she says she can’t force him to do. Jeremy says he should want to do it so that it’s covered by the insurance company because they have lots of bills which he lists one by one. Leah is clearly annoyed and doesn’t respond.

Kailyn now has to take Lincoln to her bday dinner because Javi forgot to bring him earlier so she could feed him. She is frustrated about the whole ordeal but arrives to the dinner late all smiles and feeds him at the table. Her friends try to decide what their plans are for the rest of the night. Kailyn says she wants to go out but she has worries about leaving Lincoln. Her friends remind her that it’s her bday and that now is the time to go out drinking and clubbing since she’s never done it before. Kailyn asks Lincoln is he’s ok with it and he gives her the thumbs up making her feel better.

Chelsea is home with Aubrey when her dad calls with all the charges that Adam is facing. He tells her that he could be facing up to 2 years in prison and that he has a court date next week. Chelsea is annoyed that neither Adam nor his family mentioned any of this stuff to her. She says she tries to ask Aubrey what’s going on but feels bad about grilling her every time she comes back from a visit with them. Jenelle is helping Jace decorate his room. She asks him what he’s going to teach Kaiser and he says “I’m gonna kick him in the face.” Jenelle then asks him why he’s so mean. She gets call from Nathan in jail. Nathan says he misses her but he’s doing fine in jail and it’s not bad. Jenelle tells him Jace is there and she puts him on the phone. Nathan tells Jace he’ll be home soon. Jenelle gets back on the phone to complain about the dogs and how they peed and pooped all over. She tells him it’s not so much her dog as it is his crazy dog.

Leah and Jeremy are out shopping for a new washer and dryer and they can’t agree on what to buy. Leah wants the biggest and best washer and dryer they have but she ultimately leaves the decision up to Jeremy and he agrees. When she goes to give the cashier the credit card it’s over the limit because she spent money to buy her makeup starter kit which cost $1800. Jeremy is annoyed that she spent that much on makeup and Leah tells him it was for her business and her career to make more money. Jeremy doesn’t really see the value in a Mary Kay career and walks out of the store.

Chelsea meets up with her friends Amanda and Landon for dinner to tell them about Adam’s charges. She tells them that she’s worried he’s gonna go to jail and that he’s not learning his lesson. Landon says it should be a wake up call but obviously he thinks he’s invisible. Chelsea tells them she feels bad about Aubrey since she has to go through that. She doesn’t know how she’ll find out what the outcome is after his court date but vows that she’ll never bring Aubrey to jail to visit Adam.

Kailyn and her friends go out to the club and Javi and his friends join them. Kailyn tells her friends it’s her first time in the club and they all toast to her bday. Kailyn is having an amazing time and everyone decides to hit the dance floor. Javi wants her to twerk like Miley Cyrus but Kailyn says “there’ll be no twerking.” They hit the floor anyway and dance the night away. Jenelle takes Jace out for breakfast but she’s super tired from dealing with the dogs. She tells jade from doesn’t know what to do with the dogs and Jace tells her he’ll help her. When they arrive home Jenelle trees to set up new cages for the dogs since they chewed through their old ones. Jenelle is annoyed at how hard it is to assemble the crates. While she is working on the cages Nathan’s dog starts to act out so she lets her dog out and tries to get him into the new cage. Instead of getting into the cage her dog runs off and a frustrated Jenelle just lets him go and opens the cage for Nathan’s dog to go to.

Leah and Jeremy leave the store and get into the car arguing about their financial troubles. Jeremy is pissed that Leah spends so much money on things he sees as stupid. Leah tells him that he tries to control everything she does and has not faith in anything she does. Jeremy says he has to worry about paying the bills and she doesn’t care which makes Leah cry.