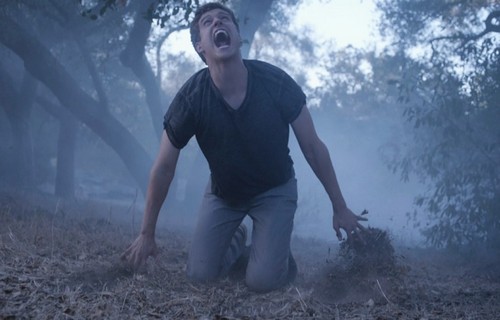 Tonight on MTV the popular show TEEN WOLF returns with a new episode called “Galvanize.” On tonight’s show, Scott and his friends try to help his target. Did you watch the last episode? We did and we recapped it here for you.

On the last episode, Scott and his friends attempted to track down the were-coyote Malia before her father killed her, in order to change her back to a human. Isaac became caught in a coyote trap while Stiles saved Lydia from another. Allison used a tranquilizer dart to sedate Malia’s father. Scott tracked down Malia and embraced his Alpha powers in order to transform Malia back into a human. Sheriff Stilinski then reunited Malia with her father. Meanwhile, Peter and Derek were freed from their captors by an unlikely ally, Braeden, who revealed to be working for Deucalion — the big bad Alpha of last season. At the Nemeton, someone released a swarm of fireflies that morphed into three mysterious, shadowy figures.

On tonight”s episode, when a convicted murderer escapes just prior to a surgery, Scott and his friends try to help the target.  We also get our first look at Doug Jones’ terrifying serial killer character.

Tonight’s season 3 episode 15 is going to be an exciting one that you won’t want to miss, so be sure to tune in for our live coverage of MTV’s Teen Wolf at 10 PM EST! While you wait for our recap, hit the comments and let us know what you think of Teen Wolf season 3b. Check out the sneak peek video of tonight’s show below while you wait for the recap!

The show opens at Memorial Hospital. Scott’s dad runs out of the hospital and tells a cop, “Only those who absolutely need to know . . . need to know.” They wheel in a man on a stretcher and, given everyone’s tone, they’re mad he’s arrived. Turns out he’s a killer. He brought a shrapnel bomb onto a student bus and killed four students. He was brought into the hospital for surgery and Scott’s mom does his pre-surgery interview.

He says, “Why don’t you just ask the question you really want to ask.”

He says, “Their eyes. They were glowing. GLOWWWIIING!”

Meanwhile, Scott and Stiles prepare for Mischief Night, a prank night for students that occurs on the eve before Halloween.

Scott arrives at school. Ethan and Aiden visit school, and they say they’re back to talk. They ask Scott if they can be part of his pack, but Isaac approaches them and isn’t having it. Nobody trusts the twins. The twins realize that they’re Omegas, not even Betas, and are therefore “the bitches of a pack.” They realize that if they don’t find a pack they’re dead, so they decide to go back to high school — to finish out the year and to gain everyone’s trust back. Ethan isn’t having it, but when he notices Danny chatting it up with another boy from school, he decides maybe he’ll give it a go.

Scott observes Kira in the hallway and he’s falling for her.

Sitting in class, Lydia is annoyed by a buzzing insect. Like a fly.

Meanwhile, the doctors operate on the Mr. Barrow. When they open him up, there’s a dark, pulsing blob near his stomach. It explodes and swarms of bugs enter the room. Even though he was supposedly sedated, he jumps up and slashes one of the docs. He escapes. Luckily Melissa isn’t hurt.

Derek sews Peter’s finger back on. Peter wants to know what they risked everything for back at the place where they were being held captive. Derek opens the jar they stole from the house. He pours out talons; they belonged to his mother. With them, he thinks he’ll be able to reconnect with her somehow and talk with her.

Aiden makes his move on Lydia. They run to coach’s office to make out. They run out because Lydia feels uncomfortable. When they slam the door behind them, it’s revealed that William Barrow is IN THE SCHOOL.

Authorities arrive at the school.

Scott’s pack tries to figure out where Barrow might be. Stiles reveals that flies flew out of Barrow’s tumor. Lydia reveals next that she’s been hearing buzzing all day — and it’s getting louder, which means that he’s here. And he’s close.

Melissa talks with Scott. She says she looked right into that guy’s eyes.

The pack tries to locate Barrow. Allison goes home to look through her family’s Bestiary for anything regarding “flies coming out of people.” Scott, Isaac, and the Twins go hunting for the man. As they’re hunting, Ethan runs into Danny making out with a new boy — and he’s a little pissed.

Lydia and Stiles are searching for clues, but then Lydia realizes something . . . . all the wolves are in the boiler room looking for the man who suspects the supernatural, the “people with the glowing eyes.” Stiles says that Barrow, who’s an electrical engineer, could easily blow up the whole school from the boiler room. Stiles, thinking quickly, pulls the fire alarm. All the students leave the school and the wolves make it out of the basement safely. They ask Lydia what’s next, what to do. She says she’s not sure. She’s just not sure.

Kira is listening to music in the library and doesn’t hear the fire alarm. Coach comes to get her out. When she leaves, Barrow is seen creeping behind a bookshelf.

Meanwhile, Derek tries to reconnect with his mother and asks Peter for help. In order to get this help, Peter must wear Derek’s mother claws. He jabs them into the tips of his fingers.

Kira’s father stealthily invites Scott over to their house for a sushi dinner. She teaches him how to use chopsticks. Adorable.

Lydia is over at Stiles’s house. They talk about the case and Lydia is feeling worried that her “feelings” are off. She’s doubting herself but, as usual, Stiles is there to lift her spirits. They deice to head back to the school to look for more clues.

Allison is looking through the Bestiary. She hears a noise. She’s nervous at first, but then it’s just Isaac trying to enter through the windows she electrified.

Peter now has Talia’s talons in his fingers and is about to conduct the procedure.

At sushi dinnertime, Kira’s father reveals that his wife is from a very unique family line in Japan. He reveals that he’s Korean and that they got married in Japan.

At the school, Stiles and Lydia check the chem lab. They find that Barrow was definitely there. On the chalkboard, Lydia notices that he written down three atomic numbers, and the numbers are associated with Potassium, Iodine, and Radium. Lydia writes out the symbols for each element: K, I, Ra . . . which spells Kira. They think that Barrow might’ve invaded the school to kill Kira. But why?

Derek finds himself in a spirit realm of sorts. He sees the Nemeton. His mother walks in as a full, black wolf.

At Kira’s house, Scott and Kira order a pizza.

Isaac and Allison continue their search for information. Isaac tries to kiss Allison. At first, she rejects his invitation, but then they both rip off their shirts. Mr. Argent walks in and he’s mad.

Derek comes out of the spirit world and Peter, sort of frantic, asks, “Did you see her? Did she talk about me? What did you ask her?” Derek is sweaty and fatigued and he looks incredibly worried.

Scott hops on his motorcycle to leave Kira’s house but before he can get far, a man (looks like Barrow) whacks him on the head.

Scott wakes up to the sound of Lydia and Stiles. They’re at Kira’s house because they figured out he was after Kira. Lydia is frustrated that she can’t access her powers to locate Kira — and she says she just wants to scream. So she does. After she screams, she realizes that it wasn’t flies she was hearing but electricity buzzing.

Meanwhile, we see Barrow with Kira. She’s tied up and he’s going off about how he saw children with glowing eyes.

Scott, Lydia, and Stiles arrive at the power plant. Barrow whacks barrow with electricity. When Barrow tries to attack Kira with his electrical wires, she thwarts his attack and absorbs every bit of electricity in the place and, in effect, drains Beacon Hills of its power.

Before the episode ends, Isaac is assaulted by the three shadow beings.