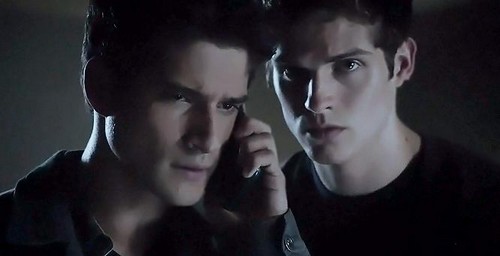 Tonight on MTV, the popular show TEEN WOLF returns with a new episode called “Riddled.” On tonight’s show, Lydia tries to master her new abilities. Did you watch the last episode? We did and we recapped it here for you.

On the last episode, Scott’s friends pledged to protect him against an increasingly hostile enemy while Mr. Argent, Isaac, and Allison searched for answers through an old adversary, part of the Japanese Yakuza. At the same time, Stiles enlisted Melissa’s help to figure out exactly what was going on with him. After Melissa conducted his intake evaluation, she gave him some sedatives and suggested the best cure right now would be to get some more sleep; however, after thinking about his current symptoms, she was reminded of a past patient who exhibited similar symptoms: Claudia Stilinski, Stiles’s mother, who died many years ago.

On tonight’s episode, Stiles goes missing; Scott and the others set off to search for their missing friend; and Lydia, the banshee coming to terms with her supernatural predisposition, tries to master her new abilities.  Will Lydia be able to use her new abilities to find Stiles? We hope so!

Tonight’s season 3 episode 18 is going to be an exciting one that you won’t want to miss, so be sure to tune in for our live coverage of MTV’s Teen Wolf at 10 PM EST! While you wait for our recap, hit the comments and let us know what you think of Teen Wolf season 3b. Check out the sneak peek video of tonight’s show below while you wait for the recap!

The show opens with Scott sleeping in his bed. He’s woken up by a phone call. It’s Stiles. Stiles whispers, “Scott, I don’t know where I am or how I got here. I think I was sleepwalking. It’s dark. It’s hard to see. There’s something wrong with my–” Stiles hangs up. Scott tries to call him back, but he doesn’t have much luck. Stiles calls back and wants help — but he doesn’t want him to call his dad. Scott yells at Isaac to get up. They need to find Stiles.

Meanwhile, Lydia is drawing Aiden in the school. Why, who knows? Lydia hears something. She drops her pencil and says that she hears voices, but Aiden doesn’t hear anything. It’s Stiles’s voice.

Scott and Isaac head out to find Stiles. Stiles is on the phone with Scott and tries to give him identifying factors to locate him. Scott asks him why he’s whispering. Stiles says, “Because I think there’s someone in here with me.”

Kira is in her room. The bulb in her lamp is dead. She touches it and, with her powers, puts some energy back into the bulb but it flickers out and dies. She calls for her mother and asks for a new bulb. Before her mother walks in, Kira’s energy breaks the bulb. Kira’s mother asks her daughter what she’s done. As Mom goes to change the lightbulb, some sparks — very briefly — fly out of her fingertips. Kira notices, and is perhaps starting to realize that maybe there’s more to her family than meets the eye.

Lydia and Aiden meet up with Scott and Isaac. They arrive at Stiles’s room — to see if they might be able to get a better scent on him. Scott tells them that they think he’s being held in some industrial area. Lydia wants S and I to go tell Stiles’s dad, even though Scott promised him he’d do no such thing. Lydia stays behind in Stiles’s room so she might be able to gather more clues from the space.

We see Stiles. He turns the light of his cell phone on and sees that his leg has been snapped in a trap. It’s bleeding and in bad shape. He moves the light around the space he’s being held in — to see who might be in there with him. He sees a figure in the corner. Stiles asks, “Who are you.” The figure draws the symbol that the oni have been branding the gang with; though, when Stiles observes this word, the Japanese Kanji meaning “self,” it disappears from the wall.

Scott and Isaac inform Papa Stilinski of the current situation. It’s the coldest night of the year, so they have to move and think fast.

The sheriff’s department has found Stiles’s Jeep. It’s at the hospital. Melissa is there. Derek is also there, searching the hospital grounds. Derek, on the rooftop trying to gather a scent, picks up on a “chemosignal.” These kinds of scents carry emotions. Derek says that it smell of stress, of anxiety, and that Stiles was struggling with not just someone — but himself.

Agent McCall walks into the precinct and is informed by a depity that Stiles is missing.

Nobody can reach Allison.

Lydia continues to look around in Stiles’s room. When she pulls the strings of his investigation board, she hears whispering — whispers about a “house.” She finds a picture of a house on the wall — it’s an asylum, the same one Barrow was admitted to after he unleashed his shrapnel bomb on the students. She says, ‘That’s where he is. That’s where Stiles is.”

Stiles attempts to break free from the trap.

“Not who are you Stiles. Who are we?” The man, who has a bandaged face and fierce teeth, attempts to help Stiles. He continues to say, “If we don’t get out of here, we’re going to die.”

Lydia leads the search party to the asylum but Stiles isn’t there. “I don’t get it,” she says. “This has to be it.” Papa Stilinski grows furious. He needs to find his son.

Melissa arrives at the precinct and finds Agent McCall there. McCall seems to think that Stiles might STILL be asleep. He thinks he might know where he is and that this place he thinks he’s in — an industrial area that smells bad — is actually just a reality his sleeping mind’s fabricating.

The man in there with Stiles gives him riddles. “Everyone has it, but no one can lose it. What is it, Stiles?” The man grows furious when Stiles doesn’t know the answer. The dark, terrifying figure grabs the trap and begins to drag him from the place . . . . but the place slowly turns into the “real world.” Melissa and Agent McCall save him. It seems as if Stiles was just trapped in a horrible nightmare — a horrible state of sleepwalking.

Isaac shows up at Allison’s. She answers the door and says that she was sleeping. Her phone was off, and she doesn’t know how it was turned off because she never shuts off her phone. When she turns her phone back on there’s a Japanese radio show playing.

Aiden asks Derek if he thinks there’s something more going on. Aiden informs Derek that he overheard Scott and Stiles talking about how Stiles thinks he might’ve left the instructions for Barrow in the chem lab. Aiden suggests that Stiles might be the nogitsune and Derek scoffs at the idea . . . . Why would a dark spirit possess someone with no power, no strength. That’s when he has a lighbulb moment — but we’re not sure what he’s piecing together.

Stiles is safe and at the hospital. When they prepare to leave, Lydia has another auditory vision, but she rejects it and tells Scott that she heard nothing.

Kira tries to talk to Scott but Scott ignores her. Derek shows up and says he might be able to help her. He wants Kira to show him what she did at the power station.

Melissa talks with Sheriff Stilinski about the symptoms Stiles has been experiencing. He already knows what she wants to tell him (that he’s going through the same thing his mother went through). He says, “I think we should run some tests.”

At the power station, Derek finds Stiles’s baseball bat. It’s magnetized. Derek seems to be pulling some stuff together. He wants Kira to tell her everything she knows about “foxfire.”

Allison and Isaac go to visit Kira’s dad about translating the Japanese left on her phone.

Meanwhile, at the hospital, Stiles undergoes some tests. An MRI. Scott is there with him. Stiles reveals that they’re looking for frontotemporal dementia — it’s what his mother had. There’s no cure. Scott tells him that, if he does have it, they’ll do something. He’ll do something.

Kira arrives at the hospital with Derek. She’s afraid to go inside with him because Derek is about to reveal his genius idea to Scott. Derek thinks that Barrow used the foxfire generated by Kira to jumpstart the dark spirit resting in Stiles.

Scott has a lightbulb moment. He thinks that Stiles was struggling on the roof of the hospital to STOP himself from doing something. On the hospital roof, Scott and Derek find a back of electrical clamps and a fraying electrical wire.

Meanwhile, Stiles is in the MRI machine, whirring back and forth loudly. Lydia is somehow hearing these noises as well and, as she sits in her car with the music blaring, she screams.

The doctor examines Stiles’s test. He reveals that certain areas of Stiles’s brain are atrophying. In the MRI machine, Stiles grows anxious. He shuts his eyes and journeys into the strange reality where the bandaged-faced man is.

EVERYONE HAS IT BUT NO ONE CAN LOSE IT. WHAT IS IT?

Stiles answers, a shadow, and then the bandaged man unwraps his face. It’s, of course, Stiles.

Stiles wakes up. The MRI machine shuts down and the hospital loses power. Everyone goes into panic.

As Stiles laces up his shoes and the hospital goes into a state of panic, the elevator doors open, only to reveal Kira’s mother. Dark Stiles looks noticeably afraid. She says that just because “he’s” hiding within the form of a teenage boy that it won’t deter her from doing what needs to be done. The oni appear by her side. If the oni won’t be able to stop you, she says, I know someone who can.

It appears that Mrs. Yukimura somehow controls the oni — in what seems like an effort to make sure nogitsune, dark spirits who possess mortals, don’t walk this earth.

We then get a glimpse of Kira. She approaches the hospital and notices a power station on the roof basically exploding. A wire whips straight down for her — but before we see if she makes it out unscathed, well, the episode ends.