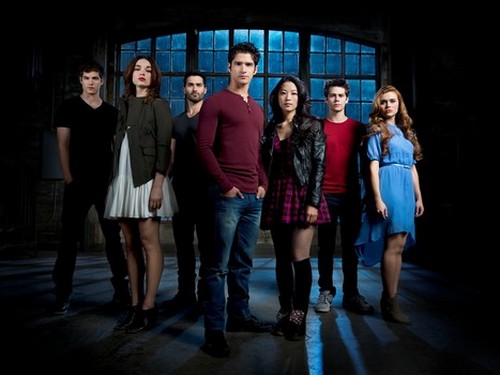 Tonight on MTV the popular show TEEN WOLF returns with a new episode called “Silverfinger.” On tonight’s show, Scott’s friends protect him from a hostile enemy. Did you watch the last episode? We did and we recapped it here for you.

On the last episode, Isaac described to Allison and her father the hooded figures that attacked him. Allison’s father was hiding a mask identical to the ones worn by the hooded figures. Kira revealed to Scott that her body emanated a glow when a photo was taken of her, and with the help of Stiles, the two broke into the Sheriff’s office to erase similar photos from Kira’s confiscated cell phone. Derek was attacked by the hooded figures.

On tonight’s episode, Scott’s friends pledge to protect him against an increasingly hostile enemy while Mr. Argent, Isaac, and Allison search for answers through an old adversary from the Japanese Yakuza. At the same time, Stiles enlists Melissa’s help in figuring out exactly what’s going on with him.

Tonight’s season 3 episode 17 is going to be an exciting one that you won’t want to miss, so be sure to tune in for our live coverage of MTV’s Teen Wolf at 10 PM EST! While you wait for our recap, hit the comments and let us know what you think of Teen Wolf season 3b. Check out the sneak peek video of tonight’s show below while you wait for the recap!

The show opens with a flashback had my Mr. Argent. He tells Allison and Scott about the strange shadow beings and his experience with them. He says they’re after people who have a connection to the supernatural, and that’s why the werewolves (and Lydia) have been marked. He says they cut down everything in their path. He tells of a man (a strange creature) who died by these demons’ hands — and he also tells of a man, Katashi, who survived that night’s attack and might be able to help everyone get some answers. These people belonged to the Yakuza. Mr. Argent reveals that he was in their company during the night of the demon attack because he was “on his first gun deal.”

Scott brings Kira home on his bike. Kira knows about his werewolf identity and she asks to see — up close. He changes and, as she looks on in wonder, Kira touches his cheeks.

Scott is riding to school on his dirt bike and runs into the twins long the way. The twins want to protect Scott from the “demonic ninjas.” They really want to prove themselves and join his pack.

Meanwhile, Stiles tries to tell Scott about his strange revelation. When Stiles shows Scott the chem lab, all of the evidence is gone. He feels like he’s going crazy. Scott asks if he’s doing okay . . . and Stiles says that he hasn’t been sleeping much.

Scott talks with the twins and he wonders . . . what if he’s not the one the demons want. He sees Kira walking in the hallway and thinks, maybe, they might be after her. Of course, Scott is the only one who currently knows about Kira’s true supernatural form.

Mr. Argent, Isaac, and Allison try to figure out how to chat with Katashi. He’s supposedly very paranoid and the only way to meet with him was to bait him with a rare, antique weapon, which Mr. Argent put up for sale yesterday.

Stiles goes into the hospital. He’s having panic attacks. Melissa is there and she takes him into a patient room. She begins to ask him questions and determines that he’s merely sleep deprived. She gives him a sedative and tells him to get some rest. As he drifts off to sleep, he says, “Thanks, Mom.”

Allison, Scott, and Mr. Argent arrive at Katashi’s estate. He doesn’t come to the gate willingly. He says they have to go to plan B.

Scott picks Kira up and ditches the twins.

Meanwhile, Mr. Argent and Allison plan a way to infiltrate Katashi’s estate. They suit him up in a tux and say that he just has to buy them some time. He’s incredibly nervous, anxious, and panicking. Allison kisses him to calm his nerves.

When Isaac walks into the warehouse with Mr. Argent’s rare, antique revolver (to make the trade), a burly werewolf walks downstairs. It’s not Katashi, and Isaac looks worried.

Kira and Scott get back home. There’s only a few hours until sundown. He says that Dr. Deaton put in a security system recently, one that only his mother can activate. Probably some mystical druidic thing. Kira begins to piece together that the demons are actually after her. She asks Scott if he’s ever heard of a Kitsune.

Meanwhile, Melissa realizes that she’s seen Stiles symptoms before: In his mother, who died in 2004.

Kira shows Scott a storybook involving the Kitsune myth. The sun begins to set. Kira says, “You know, foxes and wolves don’t really get along.” Just as Kira and Scott are about to kiss, Scott hears a car pull up. It’s Scott’s dad. He brings in his computer and pulls up a photo showing Kira and Scott sneaking into the precinct (when they went in to tamper with her confiscated phone). He wants to know how in the world they broke in.

Scott and Kira try to explain why they were I the precinct. Melissa comes home. However, just as the conversation begins, the sun sets and the shadow beings arrive. One of them stabs Mr. McCall in the chest. Derek arrives. The twins arrive. The battle proceeds.  Melissa shatters a small container of powder and erects the mystical barrier around the house that seems to work in barring supernatural beings from the premises. The action subsides and, so far, nobody else is critically injured.

At the warehouse, Mr. Argent shows Katashi the broken mask he took all those years ago. Katashi says that the shadow people are demons — they’re called oni — and they cannot be stopped.  Great.

Derek says that he’s been following Scott all day. Melissa tries to contain her ex-husband’s wound, but he’s bleeding out fast.

Katashi says that they’re looking for one person who’s not themselves — who’s been possessed by a dark spirit. Turns out that the marks behind the ears of those who’ve been marked are in fact a symbol that suggests “self,” meaning that they’re, essentially, individuals who are not of interest to these demons.

Katashi tells Mr. Argent of the different types of kitsune. He says that there’s one type of kitsune that is dark, possessed by an evil spirit. It’s called Void — or nogitsune. Katashi tells them one thing: “If there is a nogitsune among you, let the oni destroy it. Even if it is you’re own daughter.”

Back at Scott’s place, the oni are attempting to break through the mystical barrier that has them trapped in one of the rooms. They bang on the barrier with their swords — and they find a weak spot. It won’t be long before they’re out.

Scott’s dad isn’t doing well. He wants to talk to Scott, but Melissa says, “No. Not like this.”

Allison calls Scott. She tells him that they’re only after that dark spirit. He lets the oni back in and tells everyone not to do anything. He tells them all to let the oni perform their “check.”

The oni peer into Scott and Kira’s eyes. They’re both marked, meaning that neither of them are the dark spirits. Looks like Scott was right. The oni disappear.

Stiles gets out of his hospital bed. He walks into the hospital hallway.

Scott’s dad is taken to the ER.

The oni appear behind Stiles. One of them prepares to do their “check.” Stiles punches his hand into the demon’s chest. The thing dies. It does seem as if Stiles is the nogitsune, one who has dominion over other pieces of darkness. Once the other oni witness Stiles and his ability to kill their pals, they sort of “jump into” Stiles. Scott walks in and sees Stiles just standing there. He asks if he’s okay. Stiles says, in a completely normal tone, “Yeah. Totally fine.”