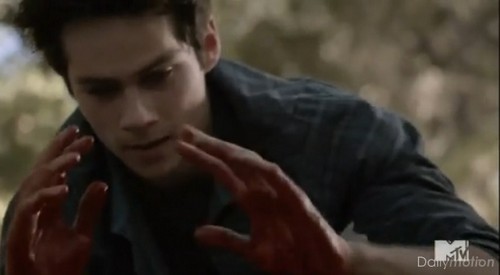 Tonight on MTV, the popular show TEEN WOLF returns with a new episode called “Letharia Vulpina.” On tonight’s show, Lydia tries to master her new abilities. Did you watch the last episode? We did and we recapped it here for you.

On the last episode, Stiles went missing; Stiles made a panicked late-night phone call to Scott after he found himself in a strange location with his leg in a steel trap. A mysterious figure spoke to him and asked him riddles. Scott, Isaac, Lydia, and Aiden attempted to find him. Lydia led them to the mental health center where Barrow was committed; however, Stiles was not there. Scott’s mother and father found Stiles, who had been sleepwalking.

On tonight’s show, Scott and the others try to prevent a disaster;  meanwhile, Lydia and Allison will seek out an unlikely teacher.

Tonight’s season 3 episode 18 is going to be an exciting one that you won’t want to miss, so be sure to tune in for our live coverage of MTV’s Teen Wolf at 10 PM EST! While you wait for our recap, hit the comments and let us know what you think of Teen Wolf season 3b. Check out the sneak peek video of tonight’s show below while you wait for the recap!

The show opens with  several business-looking men (perhaps Yakuza) waiting for a doctor to look after a sick wolf named Yuki. Dr. Deaton arrives and asks if Yuki’s been around any lichen that she may have consumed. Dr. Deaton says that he’ll be able to treat Yuki so long as he an obtain a sample of the lichen. Dr. Deaton is taken to the garden where the lichen is grown. He’s taken to the garden where the first nogitsune was killed. Growing on the fountain where the dark nogitsune was killed previously grows bright green lichen. Dr. Deaton identifies the lichen as Letharia Vulpina, and he knows about what happened there. The man pulls a gun on Dr. Deaton, but the man can’t move, as Dr. Deaton says that he’s covered the glass sample jar he gave to the man with a powerful paralytic agent. The man, the son of the previous nogitsune, utters, “Kanima.”

[Note: I don’t think he meant Dr. Deaton is the Kanima but that he used the paralytic venom of a Kanima (but we’ll just have to wait and see)]

Dr. Deaton says that this type of lichen is incredibly poisonous to foxes and wolves and plans to use the lichen to purge Stiles of the dark fox spirit that’s currently possessing him.

Meanwhile, the electrical wire that broke at the hospital, is causing havoc. An ambulance runs into a fire hydrant, forming a quickly expanding puddle. The electric from the cable interacts with the small lake and begins electrocuting people, including Isaac. Kira jumps onto the water, unaffected by the electrical current, and absorbs the energy from the cable. Derek shouts, “Isaac, he’s not breathing.” Kira’s mother witness her daughter’s display of power.

Scott wakes up the next morning and hears Derek’s voice, “You have to tell Sheriff Stilinski what’s really wrong with Stiles.”

Isaac is in the hospital. Stiles is still nowhere to be found.

Sheriff S is delivered a package. Mr. McCall comes in and asks him if he’s had any dealings with Yakuza, specifically with a man by the name of Katashi.

Scott and Allison visit Isaac in his hospital room. He was badly electrocuted. They both wonder why he isn’t healing. Scott absorbs some of his pain. Allison asks if Stiles really did this. Scott says yes and that he’s working out a way to stop him from hurting more people in the future.

In the hallway, Kira talks with Scott. She says that nogitsune are trickster spirits. She says that if someone offends a nogitsune they, oftentimes, react very badly. So this nogitsune must be extremely pissed.

The twins and Stiles hear one of Mr. Argent’s high-pitched emitters. They go down to the basement and find Stiles holding the beacon. He puts his hands up and says, “It’s me. Guys, I swear it’s me.”

Lydia is walking through the hallway and she sees Peter talking to her mom, the new science teacher. Peter gave her mom his phone number. Lydia doesn’t react well to this, especially given her history with Peter.

In the basement, Scott and Stiles try to figure out what’s going on — what trap he might’ve set.

Meanwhile, all the students run through the woods.

Chris Argent arrives at his apartment. He thinks someone might’ve broken in so he draws his gun. Carefully, he enters his apartment. He sees one of his high frequency emitters jammed into his desk. Derek grabs Argent. Derek asks why there was a beacon put in his loft. Chris says that he didn’t put it there. They both reveal that they’ve been trying to track down Stiles.

Stiles and Scott arrive at the woods. They’re trying to stop the runners. They tell everyone to stop. Stiles locates a long iron chain. He begins pulling it up from the ground. Coach approaches and asks what is going on. He trips a wire and is shot with an arrow.

In the Argent apartment, Chris and Derek locate a metal suitcase filled with money. Chris says that this doesn’t make sense, that they never took this money. Derek asks who it belongs to. Mr. McCall comes in and says, “Katashi.” He comes in waving Katashi’s silver finger.

Lydia and Allison go to Derek’s loft to seek help from Peter. “The hunter and the banshee. Come in, girls,” he says.

Derek and Chris are locked up at the precinct. They’ve been framed for murder. Chris thinks it’s odd that Stiles would’ve framed them for murder. He needs more time to figure out his motivations.

Peter says it’s not the scream that gives her power; it’s the scream that allows her to focus her hearing. He says that he can help her hone her abilities. Allison wants to know what he wants in return. He doesn’t say anything. All he does is pour out his sister’s talons onto the desk.

Next, everyone seems to think that Stiles has crafted a new shrapnel bomb.

In the school parking lot, chaos ensues. Mr. Yukimura runs onto a school bus and sees a student sitting there. He’s holding a wrapped present: the supposed bomb.

Peter reveals that he’d like Lydia to retrieve the memory that his sister/Derek’s mother stole from him prior to her death. Then he’ll help her.

Peter says that Lydia’s hearing is tuned into part of the universe that nobody else can hear. But she needs to listen. After Allison and Peter have a little fight, Lydia shouts to stop. Somehow, she throws the claws into the opposite wall. She says, “You’re not just an uncle.”

Mrs. Yukimura visits the school and acquires a small box from her husband. Her husband says, “How many more tails are you willing to sacrifice.” It’s clear that Mrs. Yukimura’s connection to the oni is bound/linked to the power of her “tails.” From the box, she pulls out a long, dark blade-ish thing. She snaps it in half.

The bomb on the bus was a fake. The deputy that unwrapped the gift pulls out Sheriff Stilinski’s name tag that usually sits on his desk at the precinct.

The real bomb is at the precinct. In the midst of panic, an officer uncuffs Chris and Derek from the bench they’re being held at. Derek shields Chris from the blast.

At the station, multiple officers are down. Scott and Stiles arrive. Chris is grateful that Derek saved his life.

Peter is upset by the memory Lydia retrieved for him. He wants to know more — wants to know who he’s fathered and why his sister would’ve stolen that precious of a memory. Allison shocks Peter so they can escape.

In the car, Lydia pulls up a picture of Malia: Peter’s daughter.

Meanwhile, Scott, Kira, and Stiles run to the animal clinic, which is lined with mountain ash. This will hopefully protect them from the recently released oni.

When they arrive at the animal clinic, the oni are also there. One of them stabs Scott with their sword.

They make there way into the clinic. As Kira tries to help Scott, the nogitsune emerges and knocks her out. Stiles plunges the sword deeper into Scott’s chest and tells him that he “should never trust a fox.” Stiles says that the nogitsune feeds off pain. After all the pain Scott’s stolen over the course of the day, the nogitsune reveals that Scott’s now vulnerable. Before Stiles can do anything more drastic, Dr. Deaton shows up and injects Stiles with a poison manufactured from the deadly lichen he collected at the beginning of the episode.

Scott asks Dr. Deaton if Stiles is better, if he’s cured. Dr. Deaton says that the fox inside him is just poisoned. For now.