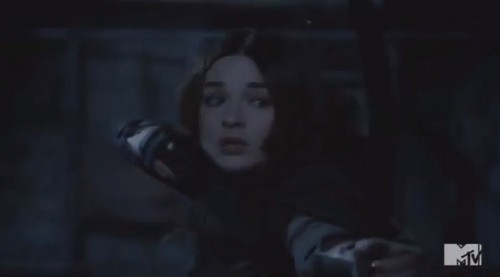 Tonight on MTV the very popular show TEEN WOLF returns with a brand new episode. In “Insatiable,” Kira faces an unexpected enemy. The words “You are not prepared,” which overlay the action in the promo as the group’s fighting and running for their lives, will also take on a new meaning.  There is certainly going to be tons of action in tonight’s episode!

On the last episode of TEEN WOLF, the chaos around Stiles continued with full force, Isaac got better but had his own issues (i.e. possessed by the Nogitsune), and the tension between Chris and Derek finally boiled over — after Derek confronted Chris about burning his family. Of course, as we saw, Derek wasn’t his normal self and was actually being possessed by the Nogitsune’s dark energy. Luckily, he snapped out of it before he totally destroyed Mr. Argent. Did you watch the last episode of TEEN WOLF? If not, then you’re in luck because we have a full recap for it right here so you can easily get caught up.

Tonight’s episode is going to be really intense. According to the promos, “someone is going to die” this season. It just doesn’t get any more nerve wracking than that! You’re not going to want to miss even a minute! We will be live blogging TEEN WOLF on MTV beginning at 10PM EST.

While you’re waiting for the show, hit up the comments and tell us who you think may die this season!

The show opens up with Dr. Deaton assisting Ethan, Aiden, and Isaac overcome the Nogitsune’s dark power. He pulls the flies from their body. Allison asks if they’re okay now. Dr. Deaton says that they should be . . . . the most concerning part is that this whole event was probably just a distraction initiated by the Nogitsune.

Meanwhile, Melissa is checking on Stiles — or at least a version of Stiles. Nobody is sure which is the true Stiles.

Mrs. Yukimura comes over with her Oni to test Stiles — to see if this version of him is devoid of any Nogitsune power. The test works and the Oni deem Stiles (this version) completely normal. He is his “self” once again, and he has the kanji behind his ear to prove it.

Next, we see the Nogitsune, in Stiles’s body, with Lydia. They appear to be hiding out in a network of underground tunnels.

Mrs. Yukimura says that, while everyone’s waiting, it’s good to learn . . . . So she teaches her daughter the game of Go. She reveals that Scott saw Stiles and the Nogitsune playing this game — and it could perhaps be a very important detail to winning the game the Nogistune is playing.

Stiles visits his father at the station and tells him that he’s himself again.

Stiles, Scott, and the Sheriff wonder why the Nogitsune would want Lydia. Stiles remembers back to his time at Eichen House; he remembers the girl on the phone who said, “He’s going to want to know the whole story.” They call Eichen House to get the name of this patient. Her name is Meredith Barnes. Eichen House confirms that she was recently moved into another wing because of “Behavioral Issues.” She wouldn’t stop screaming. In other words . . . . She’s probably a banshee, just like Lydia.

Sheriff Stilinski arrives at Eichen House. When one of the orderlies takes him to Meredith, one of the guards has been knocked out and sedated. We see Meredith sneaking around. Free from her cell.

Ethan and Aiden run through the woods, trying to pick up a scent. They hear a round being chambered. They’re fired on. Wolfsbane bullets. Aiden’s shot. Ethan is also shot, though he remains conscious.

Isaac and Allison find Lydia’s car. They get inside the car. Allison asks Isaac if he remembers the night when they almost made out, and she wants to make sure that it was actually him and not him under the influence of the Nogitsune. In the car, Allison finds a secret message written on the window: “Don’t find me.”

In the school, in Coach’s class, Meredith is sitting at a back desk.

Stiles has fallen asleep on the couch and abruptly wakes up. Scott comes running in. Stiles says that he can’t get warm. Scott accidentally touches him and senses his pain. Stiles says that he’s experiencing a dull ache. All over. And he’s clearly keeping something from Scott, perhaps the severity of his condition.

Kira calls Scott to tell him that Meredith is here at the school.

Coach tries to talk with Meredith. She reveals that she’s escaped from Eichen House and says, “They scream when someone’s about to die.” Coach asks, “Are they screaming right now?” Meredith reveals that they are. Coach asks how many are screaming. “All of them,” Meredith says.

Ethan tries to help Aiden, but he’s too weak. Derek rushes into help them.

The orderlies come to retrieve Meredith from the school, but when Coach directs them to his office, she’s gone.

Allison is prepping a weapon. Her father comes in and says, “It’s time for you to graduate” and hands her a silver bar impressed with their family crest.

Meanwhile, Lydia is going crazy in the catacombs. She’s trying to run away from the Nogitsune and mutters, ‘They’re going to find me. They’ll find me.” Lydia is being worn down by the Nogitsune’s discouraging words, and finally she asks, “What do you want?”

The Nogitsune says that he wants “More.” He says that all the trickster folktales involve a beast in search of food. The game’s always about hunger — and craving that hunger. And he’s insatiable.  He says that he craves something a little different, something more than simple foodstuffs. “I crave what you feel.”

At the school, Meredith is plucking the strings on an open grand piano. She’s hearing voices and says, “I can hear you. I just can’t understand you.” As her head is down and her ear is close to the vibrations, the orderly comes in, ready to sneak up on her and take her back to Eichen House.

The orderly has a taser and is about to shock Meredith when Coach comes in and shocks him — to help Scott, Kira, Stiles, and Lydia.

Allison’s father is teaching her how to make silver bullets with her family crest on them, but she reveals that she should be making arrowheads.

They bring Meredith back to Scott’s house. Agent McCall is there and he wants to talk with Scott. NOW.

Stiles, Isaac, and Meredith go upstairs to talk with Meredith. They ask her where Lydia is. She says that Lydia doesn’t want to be found — she already asked her.

Agent McCall reveals why he left all those years ago: When he was drunk one night, he accidentally knocked Scott down the stairs. Scott hit his head very badly on the floor. Melissa asked him to leave the morning after that happened. This is why he’s been missing from his life all these years. Scott, having more pressing matters on his mind, basically tells him that an “accident” should be no excuse to desert a child.

Meredith finally reveals a clue: She tells them a French phrase, and she really doesn’t know what exactly is going on.

Kira comes home and asks for her mother, but Kira’s father reveals that she’s not home.

Scott calls Allison to tell her that they know where Lydia is.

Meanwhile, Mrs. Yukimura is leading her Oni army to cemetery — she means business.

Derek brings Ethan and Aiden back to his loft. Chris comes too. Derek shows Mr. Argent the shell casing. When Chris examines the shell casing, he utters, “That’s not possible.”

The gang arrives at Oak Creek Cemetery, where Lydia’s currently being held captive. Scott gives everyone a pep talk.

When they arrive, Mrs. Yukimura is standing her ground. She wants them to know that Stiles cannot be saved, that nothing they do can truly right these wrongs — the Nogitsune must be killed.

The Oni finally discover the Nogitsune and Lydia in the depths of the cemetery catacombs. The Nogitsune pulls out Mrs. Yukimura’s remaining “tail” and snaps it in half.

Now . . . the Nogitsune has full control of the Oni army.

Everyone battles the Oni but they’re not much match for them. Scott and Stiles go in to save Lydia, but she’s furious that they came to rescue her. She says, “Who else came!? Who else came here with you?”

As they exit the tunnels . . . . we see Allison get stabbed by one of the Oni.