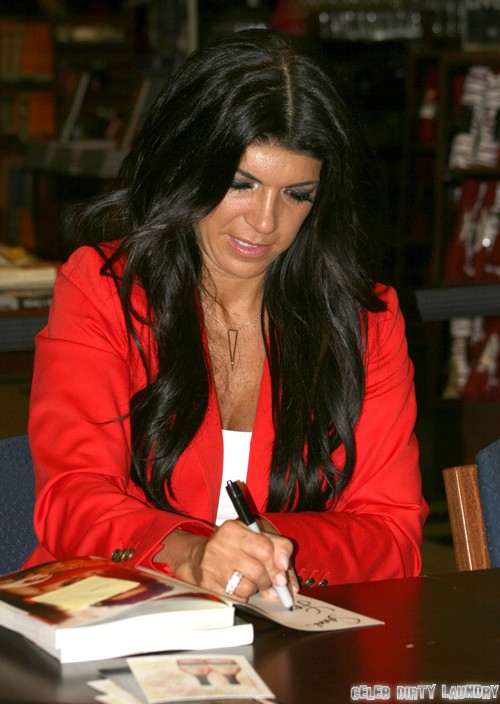 Teresa Giudice made a scheduled appearance at the Posche Spring Fashion Show on March 19. She was met by a huge throng of fans wanting her autograph on their books. To her fans’ surprise Teresa pulled a shady stunt that left a sour taste in their mouths.

Tre makes regular public appearances to promote her products and sign autographs. She is paid a fee to show up and signs her name for free. Well, her policy on product signings has changed. Radar reports Teresa is now charging for her autograph. At the Posche event she asked fans for $25 cash for each book she signed. Also, Tre would not be handing out receipts.

I know Teresa is not the sharpest knife in the drawer. However, I had no idea she was stupid enough to take advantage of her fans. She is also giving her creditors and the IRS the middle finger. By not issuing receipts or accepting credit cards Teresa is still hiding how much money she makes – or at least giving that appearance. This is not going to look good at her sentencing in July. Tre is hoping for house arrest in lieu of a prison term. She is basically asking the judge to throw the book at her.

I have always been team Teresa. However, this stunt she pulled has me very angry. Tre made a bad decision because she is in a desperate situation. Where is her convicted felon crisis counselor Wendy Feldman? Where is her lawyer? Are her people not available to help her or is Teresa not listening to good advice? Tre needs some professional help before she goes before the judge. She needs some more sessions with Dr. V. If Teresa doesn’t get her head together she will not make it through the next 5 months in one piece.