Teresa Giudice’s Prison Sentence Of 15 Months Has Her Terrified: Scared Of Being Attacked In Prison – Emotional Wreck! 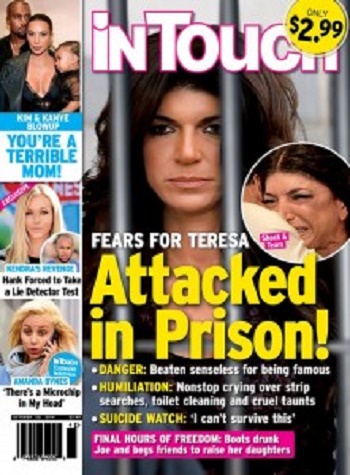 Teresa Giudice recently received a prison sentence of 15 months, and now she’s terrified of being attacked while she’s locked up! Teresa Giudice is terrified of going to prison, which makes complete sense. Shameless D-list reality stars aren’t exactly cut out for prison life, nor are they cut out for a life of crime. Unfortunately, Teresa Giudice and Joe Giudice should have realized that if they can’t do the time, they shouldn’t have done the crime.

According to the latest cover issue of In Touch Weekly, Teresa has been ‘crying nonstop‘ since her prison sentence, which is rumored to begin on January 5th. Plus, Teresa’s scared of being beat up in prison, thanks to her celebrity status and fame. Not only that, but sources close to Teresa have revealed that she’s terrified of having to get taunted on a regular basis, and even more ironic, of cleaning toilets. Yeah, to Teresa Giudice, being beaten senseless > cleaning toilets. Wouldn’t want to muss her hair, would she?

Teresa Giudice will be going to prison first, ahead of her husband, and she will be spending fifteen months in jail. However, it is a minimum security prison, which means that Teresa really is over-reacting. She’s not going to get shanked in prison, nor is she going to get beaten up. Maybe she’ll have to clean toilets, but Teresa Giudice should be thankful that she’s getting such a lenient sentence after her crimes – and her completely shameless behavior after getting caught.

In Touch’s cover also has a feature on Kim Kardashian and Kanye West fighting [again], with Kanye supposedly accusing Kim of being a terrible mother. Yeah, it takes one terrible parent to know another terrible parent.

Finally, Amanda Bynes is slowly sliding off her rocker, what with the media scrutiny and her refusing to take her medication. She’s reportedly going around telling people that she has a microchip in her head, just weeks after she got arrested for yet another DUI.