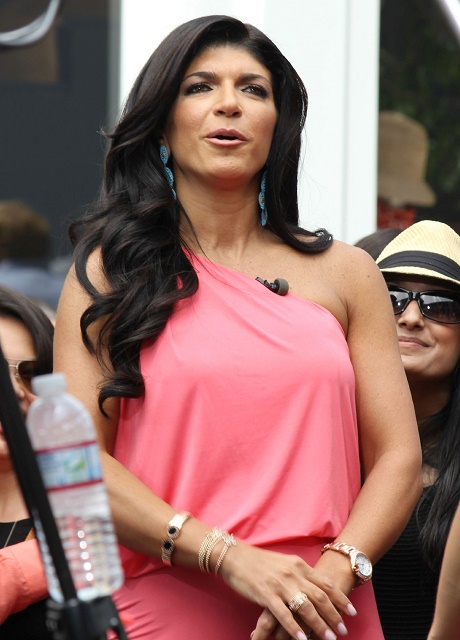 It took almost all day, but U.S. District Court Judge Esther Salas delivered the sentencing in the Giudice case, leaving Joe Giudice with 41 months, and wife Teresa Giudice with 15 months in federal prison after the greedy couple plead guilty to loan and bankruptcy fraud in March. The couple famously lived an excessive lifestyle that may have helped them deliver a certain person on the reality television show they both star on, Real Housewives of New Jersey, but it certainly did not help matters when facing the judge today.

While the couple both tried to dispel any misconceptions, Judge Salas may have had as a result of their flippant attitudes and greedy lifestyle on the RHONJ show, she was not swayed when they attempted to say that they are truly not the characters they portray on TV. In fact, all morning the couple attempted to throw out several last minute pleas or excuses in hopes something would catch and they may be given some leniency. Joe’s attorney shared that his drinking problem contributed to his missteps with the law, also citing the death of his father as another excuse despite the fact his father only recently passed away, while the couple had been committing fraud and failing to pay taxes for several years.

While Teresa Giudice tearfully gave her mea culpa in front of a packed courtroom, she attempted to sound as though she was very regretful for her part in the crimes. It fell on deaf ears, however, likely because she has failed to show any remorse since pleading guilty. Teresa most definitely thought she was going to get off with house arrest.  She claimed to be losing sleep over worrying about her fate and that of her four daughters, but the truth is, she was still living the lifestyle that her criminal involvement in her husband’s criminal master plan created for her.

Even up to the last hour, Teresa felt quite certain she’d be sentenced with house arrest. Given her lawyer projected a more lenient sentence than she received, and many media outlets were speculating she’s only get house arrest, Teresa was banking on that and the fact the judge was a woman. Teresa felt Judge Salas would have some compassion for her because she’d want the mom of four to be with her children. Radar Online even reported that shortly before their trip to the courthouse, Teresa flippantly joked about the fact that she had her make-up and hair done professionally, stating that she wanted to look good in case she had to take a mug shot. Now if that isn’t a sign of someone with no remorse, I don’t know what is.

In fact, further solidifying the couple’s lack of ethics, morals, and common sense, they hosted a “Stay Strong” party at a New Jersey club days before! The two have a great deal of money to pay back as their plea for bankruptcy discharge was denied. Between paying back creditors and the restitution Joe is required to pay, the couple should have thought about saving money months ago, but they continued on their path of denial and greed. The fact that they illegally obtained the loans, homes, cars, and luxury items they enjoyed for so long, and actually had the audacity to ask to be off the hook for the money is atrocious and only confirms what everyone already knows about their character.

The fact that the couple asked to “get out” of having to pay for their debt is extremely troubling because their children are seeing the way their parents handled their egregious misdeeds. Joe and Teresa lied, cheated and stole from the government, from friends and family, from banks, and many other creditors, but when it was time to admit their wrongdoings, they continued to lie. Once they knew they could no longer keep up with the charade, they basically asked for everyone to pretend none of it ever happened. By asking for leniency from the court, and to be off the hook in their bankruptcy, that is exactly the message they sent the judge, their fans, their creditors, and most sadly, their children.

The couple was slammed by the judge as a result of their extremely irresponsible debt of $13 million dollars. The fact that Teresa was still walking around with her expensive bags, shoes, and clothing, demonstrates that she was not the regretful person in court today—she is the same Teresa those who watch RHONJ have come to know. Teresa was certain she’d get leniency, while Joe Giudice would have the book thrown at him. This is the epitome of entitlement and utter delusion by the two, and today…they finally received what they deserved.

The two will serve staggered sentences, with Teresa serving 15 months first, and Joe serving his 41 months after. Joe also faces the possibility of being deported after he serves his time.