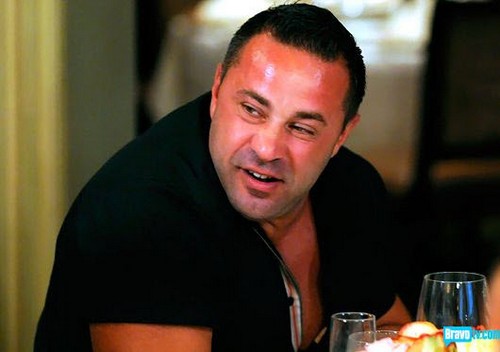 It has been awhile so I guess we were do for yet another Joe Giudice sighting with another random chick, right? Apparently The Real Housewives of New Jersey’s Juicy Joe was spotted at La Havana 59 in Moonachie, NJ. On Friday night with a dinner date that was most definitely not his wife, Teresa Giudice. Of course his date was Joe’s typical type, younger, brunette and dressed to kill. Joe will likely shrug it off as some sort of business meeting but the two got cozy on the same side of the booth and there was nothing with either of them that seemed to indicate that it was a work related dinner.

Honestly, this story isn’t even news. This is Joe’s pattern. He finds an attractive brunette and says god knows what to grab her attention and then the two turn up together in public 30 minutes from the home that he shares with Teresa and their 4 daughters. Have you noticed that? Perhaps Joe should try taking them a little further from home or trying to blend in with the masses in NYC. Taking them to somewhat local restaurants gets him caught every time. Not that it seems to really matter because no matter how much proof Teresa is handed that her husband is dishonest she repeatedly chooses to defend him before looking the other way.

“Joe sat across from the woman, who was very attractive, probably in her 30s, had long brown hair and was dressed very nicely in knee-high stiletto boots and she was carrying what looked like an expensive purse.”

“After people started noticing him and taking pictures he actually moved to sit next to her so that his back was to most of the restaurant.”

Who is Joe’s mystery woman? My guess is that it doesn’t really matter because in a few months he’ll be spotted with a new side dish anyway. Will Teresa ever get smart and kick her slimeball husband to the curb? Tell us your thoughts in the comments below!