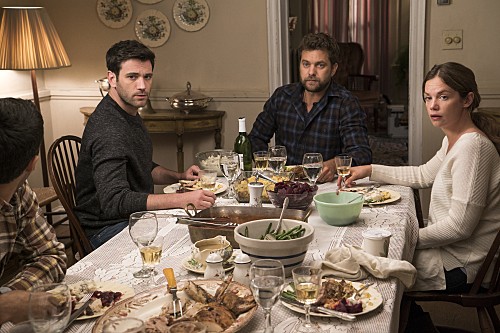 Tonight on Showtime, The Affair continues with an all new Sunday December 7, season 1 episode 8 called, “8” and we have your weekly recap below for you.  On tonight’s episode, Helen [Maura Tierney] asks Noah [Dominic West] to represent the family at a literary award ceremony for her father. But a chance encounter with Alison and her grandmother leads to an uncomfortable truth.

On the last episode, the Solloways returned to Brooklyn as the summer comes to an end. Did you watch the last episode? If you missed it, we have a full and detailed recap right here for you.

On tonight’s episode as per the Showtime synopsis, “since she is distracted by her business, Helen has Noah represent the family at an award ceremony.”

Tonight’s episode is going to be an action packed one, which you won’t want to miss. So be sure to tune in for our live coverage of Showtimes’ The Affair Season 1 episode 8 — tonight at 10PM EST!

Life is slowly returning to normal on tonight’s episode of “The Affair”. Noah is back teaching classes and things with Helen seems to be improving. Things are going well at her shop and she’s finally receiving recognition for all of her hard work.

But having her husband compliment her (via an expensive gift they can barely afford) is still kind of hard for Helen to accept. Their marriage is getting better though it’s not like Helen has forgiven him completely overnight. There are still some trust issues they have to address. And while they’re working on their marriage – things with their kids are getting out of control.

Noah’s son is getting bullied at school and their daughter Whitney has recently been caught vomiting. Helen thinks it might be bulimia. And because she’s scared of the possibility of her daughter becoming deathly ill, she’s taken to watching Whitney at all hours of the day. Which is pretty inconvenient at the moment seeing as Helen’s family needs her to go to attend a ceremony on behalf of the family.

Helen’s father is about to receive a lifetime achievement award. Yet neither Helen nor her mother can make it. And someone has to be there with Bruce. Bruce is a serial cheater and Helen doesn’t feel comfortable leaving him unsupervised.

So Noah volunteered to go watch Bruce. He said he wanted to do this one thing for Helen and their therapist agreed with letting him go. The doctor said allowing him to go unchaperoned could be a way of putting the other woman to bed.

Helen knows there’s a chance Noah will run into Allison. So she was scared about the two of them meeting up. Yet Noah told her she’ll have to learn to trust some time. And so she allowed him to go watch her dad. But Noah and Allison did run into each other.

Allison still has her side waitressing job and she was one of the servers at the event for Bruce. So Noah was instantly able to recognize her. And on that matter – Bruce recognized her as well.

Bruce had overheard his conversation between his wife and sister-in-law so he knows all about Noah’s affair. Though he’s not judging. Bruce has his own affairs and it seems one of them might have more to him than just a casual fling.

Apparently, there was one special woman. And like Allison, she acted as Bruce’s muse. Bruce was so in love with her that at one point he had considered leaving his wife. But then he thought about Helen and he realized he couldn’t do that to her. So he stayed in his marriage as unhappy as it is and chose to focus all his energy on his new book.

Somehow what was right eventually led to Noah finishing his second book. This time though his book was a commercial success. And as it turns out success came with its own strings!

Earlier, back when both him and Allison were being interviewed for the investigation, Noah was asked by the detective on the case whether he had ever heard of a place called “The End” and Noah said he hadn’t. Yet that was a lie and funnily enough Noah was the one that outed himself. He had described “The End” in perfect detail during a book reading. And the detective just happened to have attended that same reading. So now Detective Jeffries knows and its mystery about what he’ll do with that information.

Allison’s grandmother had suffered a heart attack and Allison’s mother had asked her to sign off on a DNR (Do Not Resuscitate). Allison didn’t want to but soon she saw for herself how bad her grandmother was doing. So she knew she had to actually think the decision over.

And like Noah’s version, the two of them did run into each other. Though it’s still unclear about who made the first move.

Nothing happened between them (at least physically) but the two of them eventually turned to each other to lean on. Noah had found out about Allison’s grandmother and he was with her when she made the choice.

Then when her grandmother died later that night, Allison hadn’t turn to her husband to offer her some comfort over her loss. She turned to Noah. So make of that what you will. But it’s looking like there’s a chance their affair did continue on some level.

And hopefully it’s not the criminal kind because once Detective Jeffries looked into Noah – he began to suspect Allison as well.