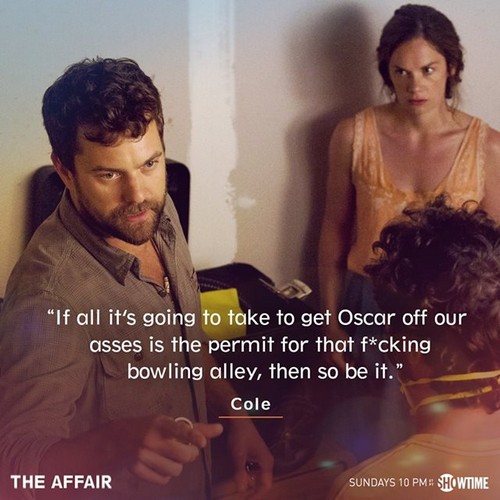 Tonight on Showtime, The Affair continues with an all new Sunday November 23, season 1 episode 7 called, “7” and we have your weekly recap below for you.  On tonight’s episode, with summer coming to an end, the Solloways return to Brooklyn.

For those of you unfamiliar with the show, the Affair looks at the emotional effects of an extramarital affair on all partners involved. Noah,  a New York City schoolteacher and novelist, is happily married to Helen but resents his dependence on his wealthy father-in-law.

On the last episode, after Noah spent a night out with his best friend, Max, he discovered there’s more to Alison than he’s been led to believe. Did you watch the last episode? If you missed it, we have a full and detailed recap right here for you.

On tonight’s episode as per the Showtime synopsis, “the Solloways return to Brooklyn as the summer comes to an end.”

Tonight’s episode is going to be an action packed one, which you won’t want to miss. So be sure to tune in for our live coverage of Showtimes’ The Affair Season 1 episode 7 — tonight at 10PM EST!

The group family sessions with his wife and daughter have enlighten Noah onto a few things on tonight’s episode of “The Affair”. It seems his teenager has caught on to the troubles in her parents’ marriage and that she suspects one of them carrying on an affair. Unfortunately, though, she picked the wrong parent to suspect. She thinks her mother is the reason her parents are so unhappy. And while she might be partially correct – it’s her father that’s been straying from the marital bed.

And now it’s her dad that wants to pack up his family to leave their summer vacay early. Noah has had enough of his in-laws and he feels Whitney will do better back in the city.

However his son Martin wanted to say some proper goodbyes. Martin had worked for the Lockharts at their horse farm during the summer. So he wanted to say goodbye to them before he left. And though Noah didn’t like it – he allowed it. He supervised his son to the farm which was easy enough and even managed to escape an awkward conversation with Allison in the process.

But a crap storm awaited for them when they returned to the Butlers’. His in-laws were fighting and objects were getting thrown around. Noah of course found the whole thing entertaining. Yet neither him nor his wife wanted their kids near that kind of mess. So they kindly packed up everything just so that didn’t have to make any sort of trip back.

Noah was happy to leave the place and he was even happier to be with his kids back in Brooklyn. But what he couldn’t seem to put behind him was Oscar. Oscar had found him alone before he left and he had demanded ten grand for his silence.

He was going to blackmail Noah over his affair with Allison. Though Noah didn’t have that kind of money sitting around. It was his in-laws that were rich. Not him. So he was forced to get a loan from his old friend Max in order to pay off Oscar and keep it from his wife. And Max had warned him to not tell Helen a thing.

But Noah had a massive panic attack later and that made him feel guilty about what he was doing. So while she was there at his bedside – he confessed to everything. He told her about his “fling” and as it turns out she knew. She suspected him and Allison. And him confessing to a 8 week long affair didn’t actually help anyone other than himself.

Helen was angry and yet she couldn’t show it around their kids. And while she wanted to yell – she kept having to restrain herself so that she didn’t alert her children. Though more than being angry, Helen was also sad. She didn’t understand why her husband cheated on her.

And all he had was “I don’t know”. As if that alone would work to satisfy her curiosity. He said he didn’t know why he slept with a younger woman and when confronted he refused to admit to having a mid-life crisis. If anything it was all the pressure he has been feeling coming from his wife and her family that drove him to have an affair. They were the ones harping on his book’s success. Also he couldn’t help mentioning that Allison had pursued him. Not the other way around.

As for Allison, the secret had come out on her end as well. Her mother-in-law had found a note written to Allison from Noah. And the older woman had burnt it before Allison could read it.

When Allison’s son died, she shut herself off from the family. And for the most part her mother-in-law gave her as much space as she needed. But that seems to be all over now. Allison was warned about the time for her selfishness has passed. Now is the time for her to be with her family. And she was going to be made to participate whether she liked it or not.

And Allison was also told that she could never tell Cole about her affair. The two women both agreed that Cole was better not knowing. But ultimately the decision was taken out of their hands. Later when Cole and his brother had wanted to peacefully come to an agreement with Oscar about their respective “businesses” – Oscar had vengefully told him about the affair.

Afterwards, Cole and his brother beat had taken turns beating the crap out of Oscar but things were rough back home. Cole and Allison weren’t speaking and Allison decided to go visit her friend in the city for a little while. She said they needed space yet the truth was she wanted to see Noah. She needed to know what he wrote in that note.

Yet she never got the chance to ask. She ran into his wife and that alone made her to stop viewing their relationship through rose-tinted glasses. Helen had thanked her for helping her daughter when the little girl was choking. And that had made Allison feel so guilty she didn’t even bother to go looking for Noah. Instead she just went back to her friend’s…where she found her husband waiting for her.

Cole, like Helen, wanted to know where they relationship went wrong. And like her he wanted to know what he could do to fix it. Allison had escaped some time back to walk away from the drug trade and with their recent troubles – Cole decided to do as she asked. He was going to give up that part of his life and he was even prepared to sell the old family farm. They had resorted to selling drugs to keep the old place afloat and it wasn’t worth it.

So he informed the family about his decision and he told his wife he wanted to start over again. Next week we’ll see how that worked out.