The Amazing Race Recap “Get Your Sheep Together”: Season 25 Episode 3 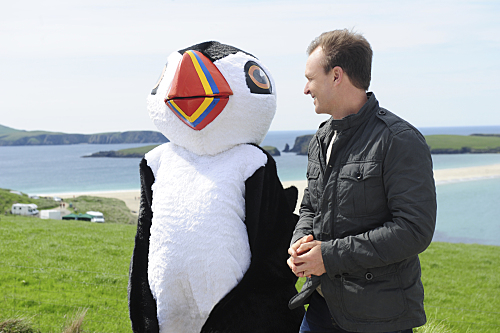 Tonight on CBS the Emmy award winning The Amazing Race returns for yet another exciting installment in an all new Friday October 10, Season 25 episode 3. On “Get Your Sheep Together” the race continues in Scotland’s Shetland Islands, where the teams tackle an obstacle course while attempting to corral a flock of sheep.

On the last episode, the race continued in London where teams tried to win an Express Pass, but some pairs chances were capsized while boating in a punt in Oxford, England. Did you watch the last episode? If you missed it, we have a full and detailed recap right here for you.

On Tonight’s episode the race makes its first-ever visit to the Shetland Islands in Scotland, where teams must corral an unruly flock of sheep down a winding obstacle course.

The nine teams are in Scotland and must go to the Shetland Islands, Keith and Whitney are looking for the train station; many of the teams are making it kind of late. Michael fell and hurt himself; his ankle is pretty sore, Kym and Alli thinks the other teams are boring; they decide to go to a pub while waiting for a train. All the contestants are on the train now and arrive in Aberdeen Scotland. Michael’s ankle is pretty sore still and he’s having trouble walking, Misti and Jim are in the lead. The teams are now in a boat to Shetland island.

Michael decides he’ll do all the things he can today to help Michael, his ankle is swollen and bruised horribly. Tim and Te Jay love Scotland, they love being together traveling the world. The teams make it to the Life boats and find the puffin with their first destination which is a castle, they are looking around inside and find a guy in the dungeon with an axe and dog; they find their first detour to cut and deliver cut dry peete or build a viking torch.

Keith and Whitney decide to pony up, like many other contestants thinking it might be the easiest. Many of the teams arrive and are kind of struggling with it because it’s far harder than any of them anticipated.

All the teams are at the viking torch detour and a lot of people are struggling so hard to fit the standards of the people their. Misti and Jim finish fisrt and put the pony full of peete; they struggled to climb the hill with the pony because it started to refuse to go further.

Many of the ponies are no coperating with them, showing a lot of fight to go back up the hills. Misti and Jim are in first place, they have finally finished the detour. Brooke and Robbie are having a horribletime with it; they are struggling so much since they really don’t get what they have to do.

Brooke and Robbie are at the last part now, trying their best to catch up to everyone else; Tim and Te Jay are the first to arrive with their torch. Next up Misti and Jim find that they have to help make the sheep get into their pens as the next challenge.

Other teams are arriving, but Misti and Jim already finish to now go to the pit spot; they already figured out where they have to go next. Shelly and Nici are really struggling; Misti and Jim are the first team to arrive to the pit stop. Brooke and Robbie finally arrive to the sheep herding, which they are having a hard time with as well. Kym and Alli are trying their best, but the sheep are being pretty sassy. Adam and Bethany are team number 2. Amy and Maya went to the wrong place, they are completely lost

The teams are all now heading for the pit stop, the last team is sadly Michael and Scott; they have been eliminated from the race. They are pretty happy about this journey, they are disappointed they were knocked out because of sheep.