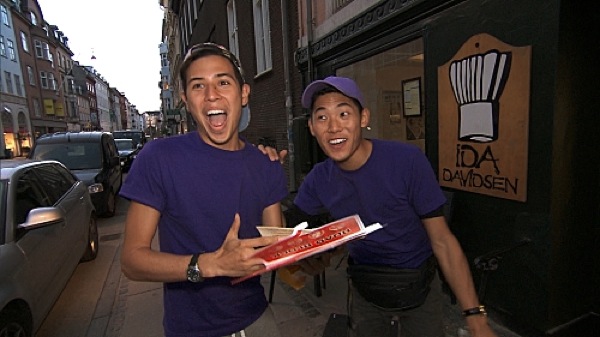 Tonight on CBS the Emmy award winning show The Amazing Race returns for yet another exciting installment in an all new Friday October 17, Season 25 episode 3 called, “Thinly Sliced Anchovies.” On tonight’s episode, the race continues in Copenhagen where the dentists realize they may need to use their “Save” during a painstaking Detour. Later, one team’s lack of communication leads to a massive meltdown on the mat.

On the last episode, the race continued in London where teams tried to win an Express Pass, but some pairs chances were capsized while boating in a punt in Oxford, England. Did you watch the last episode? If you missed it, we have a full and detailed recap right here for you.

On Tonight’s episode when tasked with a painstaking Detour, the Dentists face the realization that they may need to use “The Save.” Meanwhile, one team’s lack of communication leads to a massive meltdown on the mat.

The racers are at Shetland Island near the North Sea with 18 teams still in the race. They are on a sandy strip of land and Misti and Jim are in the lead. They are instructed to take a 13 hour ferry ride then a flight to Copenhagen, Denmark. #TheDentists still have their save available. Adam and Bethany are second and Keith and Whitney are third. TheDentists head to an internet kiosk to book their flight while they have time to kill before the ferry.

The second and third place couples head to the ferry office and are also told there is no travel agency but they don’t have time to do what TheDentists did. #TheCyclists, #TheWrestlers and others also arrive at the ferry. The others realize they have to look for a travel agency which doesn’t open til 9 am. The ferry docks at seven. They are hoping they’ll all be even but TheDentists hope they have an advantage. #MomDaughter, #CollegeSweethearts and others head to a travel agency while others head directly to the airport to buy tickets.

They park and a tech checks their gauge and he says they were very fuel efficient. They get their detour clue. They are back to Copenhagen for this mission. They have to choose a garden or living room setting and build a street scape within 30 minutes. If they run over, they have to start over. We learn that 50% of locals commute by bike. The other option is to build a cake and deliver it by bake without destroying it to a restaurant.

TheCyclists decide to do the wedding cake race. TheDentists get their car and are in second place. TheCyclists show up to the bakery for the #Detour. They assemble a tall tree shaped cake made out of a ton of layers that’s about two feet tall. They say it’s like the Jenga of sweets. TheDentists go over their fuel limit and are punished by having to search on foot for a map in the center of the square and answer a question to get their next clue.

Some of the others arrive at their cars and start their drive. Some of them look to definitely be driving too fast to be fuel efficient. TheDentists ask for help from someone with a smart phone, answer their question and decide to do the parking space challenge. The cyclists take their tall cake and head out to their bike. They try to get someone to help them with directions and a woman drives on their map. One drives while one holds the cake. They pull the cake in half for the trip but brought extra frosting to reassemble it.

Robbie of TheWrestlers asks if Sweden is a whole different country. Duh. TheSoulSurfers didn’t drive efficiently nor did several of the others. Adam and Bethany decide to do the wedding cake think. #MomDaughter can’t find their car. They are clueless and finally find it. Her mom says she owes her an apology. TheCyclists pull over and try to fix their cake quickly. They come into the restaurant and the hostess counts the layers but they don’t have the delivery receipt. They scramble to check pockets.

They head back out to see if they have it and find it on the street corner nearby. They get their paperwork and head back at top speed not slowed by a cake. They ask for baked goods as a reward and are given cookies. They now have to drive to a restaurant nearby to get the next clue. TheDentists show up to the parking challenge and they decide to do the garden setup. They have a picture for reference and work fast. They are confident they will blow everyone else away.

TheWrestlers show up to the bakery then the #SoulSurfers and #TeamNashville. Robbie is worried about the bike they have to ride to deliver. Misti and Jim are rocking on their room. The #SweetScientists arrive and start working on the living room set up. Back in Sweden, the #CollegeSweethearts show up and get their punishment for wasting gas. They answer their question quickly and decide to go do the parking space challenge.

#MomDaughter show up and were fuel efficient so they get their clue. They also choose the parking space challenge. TheCyclists are at the next challenge at a gourmet sandwich shop that’s a local institution. There are 280 sandwiches. They have to wait on two hungry customers, memorize the ingredients and relay the info to the chefs (there are a lot of ingredients). This is a challenging #Roadblock.

TheDentists are done but the guy says theirs is no good. They try to fix it quickly and they have eight seconds. Their time is up and the parking attendant says they have to do it again. They drag their grass rug into the adjacent space and start over. #MomDaughter opt for the cake. TheCyclists are finally getting a grip at the sandwich roadblock. They get their clue, kiss the chef and ask for a delicious sandwich. The pit stop is the VM Houses, an unusual architecture display.

#TheWrestlers are getting the warning bell from other cyclists. #SweetScientists have about 10 minutes left and #TheDentists have 25 minutes to go. #Nashville and #SoulSurfers show up and they are happy to see the two dentists there. #TheWrestlers arrive with their cake and set it down and they check out. They head back to the bakery for their next clue. The scientists get theirs right with time to spare and that puts them in second place. They grab their clue and take off.

The Wrestlers are now in third and the soul surfers are told to try again. Team Nashville gets the thumbs up but the dentists are still struggling. They are missing one small thing to do with a planter and gardening gloves but just aren’t seeing it. They give up and decide to go try the cakes. Bethany is surprised. They actually had the same mistake – the flower pot needed to be tipped up and it looks like they caught it.

Kym and Alli come in first and they each won a Ford hybrid. The scientists make it to the sandwich shop followed by the wrestlers who say they have nothing upstairs and that it will be a struggle. The college sweethearts show up to the parking space challenge. They still have a problem with their flower pot. Mom and daughter show up to start their challenge and are thrilled. The dentists make it to the bakery and they are confident they can knock this one out.

Keith and Whitney make it to the sandwich shop. The scientists are struggling there. Robbie messes up again and has to go back. Maya forgets and walks away. Misti and Jim head out with their cake. She sits to hold the cake and he pedals but finds out it’s not easy. They lost a flag on the street! Maya finally gets her last sandwich correct. The customer teases her and says it’s the wrong sandwich but says she’s kidding and Maya falls on the floor in relief.

Robbie finally gets his last one and he’s thrilled. Whitney gets her last one and they head out too. The soul surfers flip their flower pot, get it right and are in 5th followed close by the college sweethearts. The dentists show up to the restaurant. They come in with the cake. The woman counts layers and then says she can’t take the cake. They ask if it’s missing something. She tells them to go back to the bakery – they head back to get their flag.

Mom and daughter argue over the living room set up. The Wrestlers make team two at the checkpoint and then Keith and Whitney are there for a solid third place. The Dentists get their flag and head back. They are trying to finish but know if they are last, they can use the save. In fact, they are in seventh place as of now. Te Jay is a waiter and says he can do the sandwich challenge. Mom and daughter get their parking space approval and they are still in last place.

Amy and Maya show up to the checkpoint for an official fourth place. Te Jay goes quickly and they take off. Misti does it for the dentists while Adam does it for the soul surfers. Bethany tells him to take his time. Misti gets hers wrong and is annoyed. Mom and daughter show up and so it’s all neck and neck now. Adam finishes up and that puts them in sixth. Misti is struggling. Jim tells her to relax. The college sweethearts get their official fifth and Phil gets loved on by a giant Great Dane hound that tries to smooch him.

Shelley and Nici get their pass and run out happily. Misti tries a fourth time and fails again. Jim says it looks like the save will burn tonight. Adam and Bethany get lost on the way to the check point and so do the mom and daughter. They swap for her daughter to drive after they argue. Her mom lets her drive past the check point on purpose! Misti realizes what she was doing wrong was not saying the sandwich number first. It takes her nine times to get it right.

Shelley and Nici show up for sixth place but both are in a bad mood. Nici walks away annoyed having a #MatMeltdown. Phil says to be a grown up and talk it out. Nici says she can’t win when her mom doesn’t want to win with her. Adam and Bethany are thrilled to hear they’re in seventh. Jim hands over the save but Phil says it’s a non-elimination leg. Jim says he has lost all confidence and says it’s humbling how badly they screwed up today.