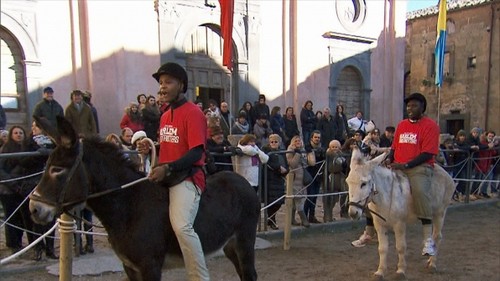 Tonight on CBS the Emmy award winning show The Amazing Race returns for yet another exciting installment. On “Donkylicious” the race continues in Orvieto, Italy, where the six remaining teams face a double U-turn; and the Cowboys contemplate a major decision.

On last week’s episode “The Gladiators Are Here!” the race continued in Rome where a Detour required the duos to dress as gladiators and battle. Also, three teams struck a deal try to avoid elimination.  At the end of the race Jessica and John arrived in 7th place and they were eliminated from this season of the Amazing Race.  Did you watch last week’s episode?  We did and we have  a full and detailed recap, right here for you.

On Tonight’s episode the race continues in Orvieto, Italy, where the six remaining teams face a double U-turn causing the pairs to make a difficult decision. By the end of the show one pair will be going home.

Tonight’s episode of Amazing Race kicks off in Rome, Italy where the 8th leg of the race is kicking off. Brendon and Rachel are the first team to depart and are headed to Civita Di Bagnoregio. Caroline and Jennifer depart second and Dave and Connor depart third. Caroline and Jennifer are working with the father and son team, and they get directions to Civita Di Bagnoregio and share them with the other team. Jet and Cord depart fourth, and they still have an Express Pass to use. Leo and Jamal and Flight Time and Big Easy depart fifth and sixth.

Brendon and Rachel arrive at Civita first and find the detour clue. They have to choose between donkey run, which is a race riding donkeys. Or, donkey build, which requires the teams to build a wooden donkey in a workshop. Brendon and Rachel and Dave and Connor decide to do the donkey race.

Brendon and Rachel have some serious problems when they both fall off their donkeys and they run away. They are able to complete the race on their second attempt and receive a clue telling them to Hotelia de Pompei.

Caroline and Jennifer still haven’t arrived at Civita, they had the same directions as Dave and Connor. Dave and Connor got off on an exit, and the girls missed it. They are completely lost. They aren’t the only ones though, Flight Time and Big Easy are also lost.

Brendon and Rachel arrive at the next clue, and it is a Double U-Turn. Rachel is hesitant, but they decide to U-Turn Dave and Connor, who are still struggling to complete the donkey races. Jet and Cord arrive at the donkey making detour, and decide to use their Express Pass and skip the competition.

Brendon and Rachel arrive at the chapel and the next Roadblock. The teams are required to copy a page of ordinate writing from an ancient manuscript perfectly, before they can move on to the next clue. Jet and Cord arrive at the Chapel right after Rachel begins the task.

Dave and Connor and Caroline and Jennifer arrive at the Chapel and see Brendon waiting outside. Dave and Connor let Brendon know that they didn’t appreciate being U-Turned. Brendon keeps apologizing though.