BY Amanda Austin on May 11, 2014 | Comments: one comment
Related : Reality TV, Recap, Television, The Amazing Race 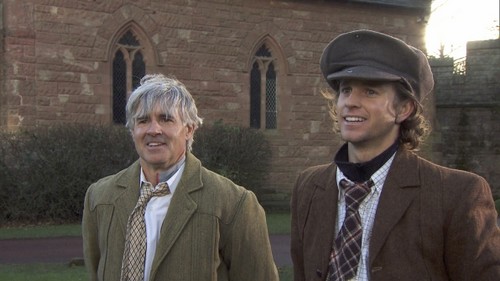 Tonight on CBS the Emmy award winning show The Amazing Race returns for yet another exciting installment. On “Hei Ho Heidi Ho” the race continues in Liverpool, England, where the four remaining teams race to move ahead.

On last week’s episode “Bull Down” the race continued in Seville, Spain, where the four teams remained where another double U-turn threatens the accidental alliance. Meanwhile, one team suffers a potentially game-changing injury. By the end of the show Jet and Cord came in last place, and they were eliminated. Did you watch last week’s episode? If you missed it we have a full and detailed recap, right here for you.

On Tonight’s episode the final four teams are in Liverpool, England, where they experience a once-in-a-lifetime shoot-out at the historic Anfield Stadium, home of the Liverpool FC. Meanwhile, one team misreads a clue and jeopardizes their chances at making the final three.

RECAP: The contestants are in Sivil, Spain which is the start of the 11th leg; Dave and Connor get to go first because they arrived first in the last leg. They must go to London, England and go to a soccer arena called Enders Field in Liverpool and score kicks on a pro goal keeper. Jamal is worried since they were eliminated last year in Japan and wants to really make it to the final three this year; all teams are now making there way to London by plane and train.

They each have their own Ford waiting for them in England and make their way to Ender’s Field in Liverpool. Jamal and Leo are the first to arrive at the soccer stadium, they love soccer and are so excited to be able to do this. They decide to go for the smaller look goal keeper; they must score two goals. Jamal kicks the ball and completely messes up. Leo then gives a kick and misses his first shot; the second one being a miss. Jamal scores the first one and Leo scores the second right after.

They get their two each and are the first to move on and must find the Stream in the Sky which is known as Pontcysyllte Aqueduct for their next leg of the race; Jamal and Leo are in first place right now.

Brendon and Rachel are in second place moving on from the stadium, Dave and Connor are the last ones there.

Caroline and Jennifer finish there goals and move on. Dave and Connor are really struggling on getting their goals; messing up several times. Connor finally scores the two last goals and moves on with the rest of the teams.

Leo and Jamal have no idea what they are doing so they go to a gas station for help on directions; they get no help whatsoever. Brendon and Rachel are now ahead of Jamal and Leo’s lead; Brendon tricks them and makes them go the wrong way. Caroline and Jennifer are the first to arrive, they run up and for their next roadblock makes them have to rehearse poetry at the end of the aqueduct at the end of the 15 minute ride.

Jamal and Leo get there at the same time as Connor and Dave.

Brendon fails his first attempt and has to go again, Caroline fails as well and needs to go back, Jamal then also fails; Connor then goes ahead and fails just like the others. Nobody makes it at their first attempt. Brendon comes for his second time and is the first one to move succeed, Caroline then goes next the second time and passes as well, Jamal then fails and needs to go again. Connor fails the second time and is really frustrated. Jamal goes his third time and fails again. Jamal finally makes it and he is so happy; Connor goes again and does really well moving on with the other teams.

Now the teams are at a detour, they can do Shoot It to shoot clay pigeons with a shotgun; the second option is Boot It where teams will have to fill boots with water and throw them till they cross the finish line.

Jamal and Leo are still lost and have no idea where to go; they have fallen behind with all the other teams already at the detour.

Caroline and Jennifer are doing well at the clay shooting, while Brendon and Rachel are making amazing progress at their boot tossing. Dave and Connor are slightly behind, but still they are no where near last since Jamal and Leo still have not shown up yet.

Caroline and Jennifer are the first to complete their detour they must go to Peckforton Castle next and it’s the pit stop for this leg of the race.

Connor and Dave complete theirs soon after and are right behind the two girls, Jamal and Leo just arrive to the detour while Brendon and Rachel totally failed their part of the race; they accidentally got size 10 shoes when it had to be 9 or 11; Rachel is totally freaking out.

Brendon and Rachel do it and now get to move on to the pit stop, Jamal and Leo just finish as well and are now on their way as well. Brendon and Rachel stop at some house to look for directions but there is no one home, the team to arrive in third place is Brendon and Rachel. Jamal and Leo are sadly in last place of this leg of the race means they must go home. They felt like they took their selves out with how they got lost so much, but they had a good time and will stay positive treasuring this experience.