BY Amanda Austin on May 4, 2014 | Comments: one comment
Related : Reality TV, Recap, Television, The Amazing Race 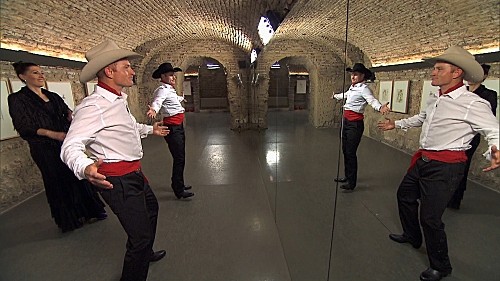 Tonight on CBS the Emmy award winning show The Amazing Race returns for yet another exciting installment. On “Bull Down” the race continues in Seville, Spain, where the four remaining teams race to move ahead.

On last week’s episode “Accidental Alliance” the race continued in Lucerne, Switzerland, where the five teams remained. In the Active Route Marker, Cowboy brothers Cord and Jet had to change into uniforms and clean a hotel room to meet Swiss standards in order to receive the next clue. By the end of the show Caroline and Jennifer came in last place, but they were saved because it was a non-elimination round.  Did you watch last week’s episode?  If you missed it we have a full and detailed recap, right here for you.

On Tonight’s episode The Racers are in Spain where another double U-turn threatens the accidental alliance. Meanwhile, one team suffers a potentially game-changing injury.

Tonight’s episode of Amazing Race kicks of the tenth leg of the race in Switzerland. Dave and Connor are the first team to depart, they learn they must fly to Seville, Spain and make their way to The Alameda, a garden. They also learn there is another U-Turn ahead, and they hope the other teams will choose to U-Turn Brendon and Rachel. Jet and Cord depart second, followed by Leo and Jamal. Brendon and Rachel are the fourth team to depart, followed by the last team – Caroline and Jennifer.

Dave and Connor and Leo and Jamal arrive at the airport and book 5:00 flights. Jet and Cord miss the airport exit and have to turn around. Brendon and Rachel head to a travel agency and book a 7:05 flight, along with Caroline and Jennifer and the Cowboys.

Leo and Jamal and Dave and Connor arrive in Spain at 5:00 PM. They make their way to The Alameda where they find a clue that says “Your clue will arrive at 8:30 AM.” Dave and Connor and Leo and Jamal rush back o The Alameda first thing in the morning and receive a clue sending them to a hair shop. They arrive at the shop and find their Road Block. They must use a razor to shave a balloon in 60 seconds without popping the balloon. Connor and Jamal are off to a rough start and they both pop their first balloon. Connor completes the challenge and receives their next clue telling them to head to the Real Alcazar. Jamal finishes his balloon soon after and they head to Real Alcazar as well.

Caroline and Jennifer arrive at the Alameda first, followed by Brendon and Rachel. They both pick up their clues and head to the barber shop. Jet and Cord are currently in last place.

Caroline and Jennifer arrive at the Road Block, followed by Jet and Cord. Both teams begin trying their luck to shave their balloons. Brendon and Rachel are in last place now, and lost, their cab driver has no idea where the barber shop is.

Brendon and Rachel finally arrive at the Barber Shop, and Caroline and Jennifer and jet and Cord are already working on their balloons. Dave and Connor arrive at Real Alcazar and find a detour. They must either learn a traditional Spanish Flamenco dance or “Run With The Ballz” which is an obstacle course through the city wearing a large plastic ball.

Back at the Barber Shop Rachel completes the Roadblock and receives her next clue, they head to Real Alcazar, immediately followed by Caroline and Jennifer. Jet and Cord complete their balloon and head out in last place.

Dave and Connor have chose to “Run With The Ballz.” Connor and Dave climb in the huge balls and begins trying to make it down the narrow alleys. They come out in a clearing and find a bunch of men in matching balls, and they begin tackling them. Leo and Jamal have opted to “Run With The Ballz” as well and are experiencing similar difficulties.

Caroline and Jennifer arrive at Real Alcazar and learn that they have to complete a Speed Bump challenge since they were last week – before they can head on to the detour. They have to deliver six raw ham hocks to an address and then return to Real Alcazar for their detour.

Jet and Cord arrive at the Pit Stop in last place and are officially eliminated from the Amazing Race.