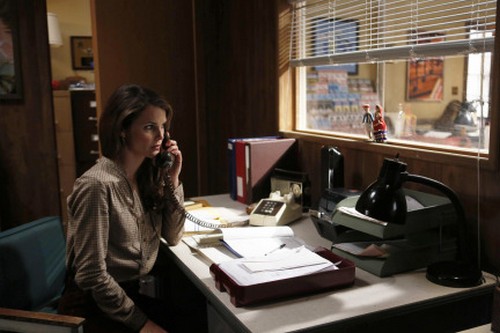 Tonight on FX THE AMERICANS continues with another new episode called, “The Cardinal.”  On tonight’s episode Elizabeth gets a mysterious distress signal. Meanwhile, Nina and Stan are presented with unique opportunities.  Did you watch last week’s season 2 premiere?  We did and we recapped it right here for you enjoyment.

On last week’s episode Elizabeth came back from her injury and straight into what should have been a routine mission – but it went awry, leaving her and Philip in fear not only for themselves but for their whole network… and family. Paige’s suspicions have only grown in her mother’s absence. Meanwhile, Stan continued to fall for the Russian agent who had started to play him.

On tonight’s episode as Philip investigates the fallout from the last operation, Elizabeth sticks close to home, concerned for her family until she gets a mysterious distress signal. Meanwhile, a walk-in arrives at the Rezidentura – providing both Nina and Stan with unique opportunities.

Tonight’s episode looks like it is going to be a great episode and you won’t want to miss it, so be sure to tune in for our live coverage of FX’s “The Americans” Season 2 episode 2 at 10 PM EST! While you wait for the recap, check out our sneak peek video of tonight’s episode below!

Tonight’s episode of The Americans opens with Elizabeth trying to decode a message, but Paige and Henry need her help getting ready for school. Elizabeth heads out to pick her paper up off the sidewalk and looks around nervously. She is suspicious of everyone she sees outside.

Martha and “Clark” are having breakfast, she confides in him that she is considering applying at a new job, and he quickly talks her out of it. Martha sees the news story about the Russian spies and their kids being slaughtered in their hotel room, and is afraid it’s a “Manson thing.” Clark reassures her that Manson wasn’t involved, and then heads off to work.

Philip arrives at work, and takes Elizabeth aside, he wants to know what message she received. Elizabeth confesses that she didn’t get the message because the kids were up. Philip reassures her that Martha is completely clueless about the spies’ murders, the FBI was not involved. Stan interrupts and invites Philip to help him and his friends plan a bachelor’s weekend.

Oleg wants Nina to get to work and figure out what is going on so he can send a report.

Philip got the message, he has to meet with Emmett’s agent in Chesapeake to check him out. Elizabeth tells him to go tonight by himself, she wants to stay with the kids in case they are in danger.

Oleg is playing recordings of a conversation for Nina. They are interrupted because they have a “walk-in.” Oleg informs the officer to do a background check on him.

Philip is getting ready to leave to meet Emett’s agent. He kisses Elizabeth and Henry good-bye and says he will be back in a couple of days. Elizabeth is too buys watching a team of construction men across the street, she is becoming paranoid.

Oleg is dealing with his “walk-in.” The man is furious because they haven’t done a background check on him, so Oleg has him locked in a room. He is talking to him through the intercom and the man says he wants to “do something for the cause, but he has to be to work in twenty minutes.”

Philip is setting up a phone tap at an office building while tracking down Emett’s agent. He calls and checks in on Elizabeth and everything is fine at home. He continues on his mission and breaks into a house. He finds a hallow floor board and realizes there is a safety deposit box hidden under the floor. He removes the board and a car pulls up to the house, he tries to quickly grab it but it appears to be booby-trapped and electrocutes him, he falls to the floor unconscious.

Nina reports to Stan and fills them in on the walk-in at the office, she says she didn’t see or hear anything high priority though. Stan says he “has to get on it” but Nina tells him to wait an hour and starts kissing him.

Philip wakes up, and realizes he is tied up. There is a man standing over him on the phone talking in code. He tells the man, Fred, that he knows him he did a hand-off with him, and he is a friend of Paul’s. He tries to tell Fred that he has nothing to worry about, and that he is wearing a disguise, but Fred ignores him and continues packing up his room and running around panicked.

Elizabeth receives a phone call, and jots down a code. She tells her kids she has to take a message for Dad. She looks out the window at the construction crew and then tells her kids, that there is a change of plans and they are going to go see a movie.

Phillip is still trying to reason with Fred. But, Fred pulls a gun on him. Philip continues trying to convince Fred that he was a friend of Paul’s. Fred starts crying and drops the gun. Fred says that he is going to go meet Paul and ask him about Philip. Fred obviously has no idea Paul is dead, Philip explains to him that Paul and his wife and kids were murdered in the hotel. Fred bursts into tears again.

Elizabeth is in her car driving around in circles with her kids, they are getting annoyed because she keeps missing the turn to the movies.

Philip must have reasoned with Fred, because he has untied him. Fred wants to know if Philip has the codes he gave him in Alexandria.

Elizabeth walks down an alley and finds a woman crying in an alley with a gun, she is the one that sent the message over the phone. The young spy is crying and distraught, the Congressman that she is sleeping with made her take drugs with him. He is OD’ing in the car and she is high and can’t think straight. Elizabeth sticks her finger down the Congressman’s throat to induce vomiting and tells the woman to wait with him. She buys her coffee and tells her not to party with him anymore, she is supposed to be his girlfriend. And, when he wakes up she should tell him that she saved his life, and his career by not taking him to the hospital. Elizabeth tells her she is doing a great job, and then leave her in the alley.

Stan is researching Oleg’s walk-in Bruce, he works at a bank. He’s not going to bring him in yet. Meanwhile Oleg is at his office assigning Bruce a codename.

Philip calls Elizabeth and fills her in on his trip to Fred’s house, he assures her Fred didn’t have anything to with Emmett’s death.

Nina is typing up a note describing her time with Stan that day, down to every dirty detail. When she is finished she takes the letter to Oleg.

Paige is downstairs snooping around. She calls the operator and says she is looking for the phone number and address for Heather Layton.

Philip arrives at home, and discusses maybe moving for an assignment, and what they are going to tell their kids. Elizabeth is worried about Emmett’s son and what is going to happen to him. Philip says not to worry he is going to be taken care of. Elizabeth confesses that all these years she has never worried about Paige and Henry, but now that she seen what happened to Amelia she doesn’t know how they are going to live like this. Philip admits how guilty he feels about taking Henry on the hand-off with him in Alexandria. Elizabeth reassures him that he didn’t have a choice.