BY Amanda Austin on April 16, 2014 | Comments: one comment
Related : Recap, Television, The Americans 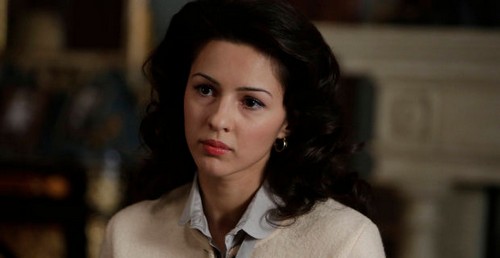 Tonight on FX another new episode of THE AMERICANS is on for you to enjoy. In “New Car,” Philip and Elizabeth face painful turns in their missions. Meanwhile, Stan tries to access an American military program.

On last week’s episode Philip usesd his agent Charles Duluth to help him gain access to an early precursor to the Internet so that the KGB could bug American government communications. Nina faced the threat of a potential FBI polygraph exam, bringing her closer to KGB colleague Oleg.  Did you watch last week’s episode?  We did and we recapped it right here for you.

On tonight’s episode Philip and Elizabeth both find themselves faced with painful turns in their various missions. Stan fights to gain access to an American military program that could give him the upper hand in his battle of wills with Oleg. Written by Peter Ackerman; directed by John Dahl.

Tonight’s episode looks like it is going to be a great episode and you won’t want to miss it, so be sure to tune in for our live coverage of FX’s “The Americans” Season 2 episode 8 at 10 PM EST! While you wait for the recap, check out our sneak peek video of tonight’s episode below!
Tonight’s episode begins now – Refresh Page for Updates

Tonight’s episode of The Americans begins with Clarke and Martha in bed. Martha says that now that she and Clarke are together she doesn’t want to be involved in his office’s operations. Clarke tells Martha she can’t ask him to choose between his country and her.

The next day Phillip and Henry head to a car Chevrolet dealership. Phil climbs in a Camaro and checks it out, Henry thinks it is awesome because eit was the same kind of car used in the Indie 500 race.

Anton is in a facility in Russia being lectured by Vasili, the leader of the operation. Vasili gives him the box that Phil copied the Arpanet onto last episode, and then he apologizes to Anton because he knows he misses his family in America.

Phil buys the Camaro and brings it home. Elizabeth comes out of the house when they pull into the driveway in shock.

Elizabeth is giving Phillip the cold shoulder for buying the car. He tells her it is okay to like the car, and the house, and the fancy shoes she wears once in a while. She doesn’t want to hear it, she doesn’t like American things. She just lives like this because she has to.

Lucia sneaks into Larig’s house and shoots him in the back with a dart. He pulls it out and turns around and she informs him that it “isn’t lethal.” He attacks her and she shoots herself in the leg with the same type of dart.

Stan meets Oleg at an arcade. He wants Oleg to guarantee to him that Nina won’t get hurt or discovered by his people before he hands over his files. Oleg says he has no interest in anyone getting hurt.

Elizabeth receives a phone call and then puts on her disguise and heads to Larig’s house. He answers the door, and he is not happy. He lets Elizabeth in and shows her Lucia. He has her tied up in his kitchen. He says he wants to trade his freedom for her life. He won’t kill Lucia as long as the Russians will let him off the hook and he can be done working for them.

Nina meets Stan and Stan tells her that he gave Oleg the files. Nina is an amazing actress. She acts distraught and cries to Stan about what they are going to do. She tells Stan that she is scared that the FBI is going to find her out.

Larig agrees to help Elizabeth get into the Marshall’s camp and then he is done. There is a hand signal and a password in order to get into the camp, but they haven’t been released yet. Elizabeth tells him to get her the signals and the reports from Nicaragua and they will never see him again. Larig unties Lucia and then she grabs a corkscrew and tries to stab him. He grabs her and puts her in a chokehold and Elizabeth pulls her gun on him. Larig tells Elizabeth it is either him or Lucia. Elizabeth drops her gun and stands there and gives Larig her blessing to kill Lucia. Once Lucia sotps breathing Larig drops her to the floor and tells Elizabeth he will get the signals to her, but she needs to get Lucia’s body out of his house.

Stan declares to his boss that he is “going after Oleg,” but he needs the code. He thinks that they should kill Oleg.

A family arrives in their house with their suitcases, they have obviously been out of town. They find Henry sleeping on their couch with the television blaring.

Arkady congratulates Oleg and Nina on their work with Stan, he is impressed. Afterwards he invites Nina to go dancing with him at the disco. Nina says she can’t be seen in public with him, but Oleg doesn’t see why not.

Phillip arrives home and his neighbors Bob and Christy are standing in his living-room. Elizabeth fills him in and tell him that Henry broke into their house while they were gone to play video games. Phillip apologizes profusely and says it will never happen again. After their neighbors leave Elizabeth tells Phillip that Larig killed Lucia. Phillip wants to go get revenge on Larig, but Elizabeth explains that she was there and she let him.

Phillip meets his handler Kate the next day and she fills him in on two companies that are competing to create invisible planes, well invisible to radar. She tells him that a submarine went down and they lost 160 men, it was faulty because of a propeller. The Americans intentionally planted plans to build faulty submarines knowing that the Russians would steal them. Phillip is devastated. He heads home and Elizabeth reveals that Larig sent her the signals to get into camp. He tells Elizabeth that the plans they stole were fake and they sunk their own submarine with them.

Stan visits the President, he says that he thinks the Soviets kidnapped a scientist to work on their projects. He needs to DOD passwords to get clearance and investigate it.

Elizabeth and Phillip receive the signals from Larig. They kidnap a driver named Lewis and steal his truck so that they can get onto the camp tomorrow. They ask him where he parks when he drives into the camp and who his replacement is supposed to be when he doesn’t go into work.

Arkady discusses the sunken submarine with Oleg, he doesn’t think they should steal the Americans’ “invisible plane” plans. The Americans will probably plant faulty plane plans and the Russians planes would fall out of the skies.

Elizabeth and Phillip finally confront Henry about breaking into the neighbors’ house. He cries and says he feels horrible and he hates that everyone thinks he is a criminal. He sobs to his parents that he is a good person.