BY Amanda Austin on April 9, 2014 | Comments: one comment
Related : Recap, Television, The Americans 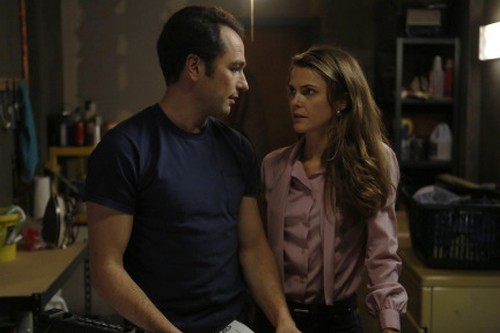 Tonight on FX another new episode of THE AMERICANS is on for you to enjoy. In “Arpanet,”  Philip attempts to bug American government communications. Meanwhile, Nina faces a potential polygraph test.

On last week’s episode a dangerous Naval officer became the key to Philip and Elizabeth’s mission as well as a potential threat to their family’s safety. Lucia, a Sandinista intelligence officer working with the Jennings, was tasked with getting Elizabeth access to Capitol Hill. Stan struggled with the potential costs of protecting Nina. Written by Melissa James Gibson; directed by Charlotte Sieling.  Did you watch last week’s episode?  We did and we recapped it right here for you.

On tonight’s episode Philip uses his agent Charles Duluth to help him gain access to an early precursor to the Internet so that the KGB can bug American government communications. Nina faces the threat of a potential FBI polygraph exam, bringing her closer to KGB colleague Oleg.

Tonight’s episode looks like it is going to be a great episode and you won’t want to miss it, so be sure to tune in for our live coverage of FX’s “The Americans” Season 2 episode 7 at 10 PM EST! While you wait for the recap, check out our sneak peek video of tonight’s episode below!

Tonight’s episode of The Americans begins with Nina filling Oleg and in on Stan’s request for her to take a polygraph test before he will protect her. Oleg tells her she has no choice but to do it. She tells them that if she fails the test Stan will kill her, they don’t seem to care.

Phillip meets up with his handler and she informs him that he has to “bug the Arpanet.” She gives him the bug, which is the size of a modern laptop, and tells him he has to hook it up to the government’s Arpanet and make a copy of it, and then bring the bug back to the center.

Phillip breaks into a house and finds Charles drunk and passed out in bed.

Elizabeth and Phillip meet up with Lucia for lunch, she will be assisting them with their plan to take down Larig. Phillip is upset that Lucia attended a “talk” that Larig was giving in her country. Lucia insists that she was “just a face among many.” Elizabeth tells Lucia that Larig will provide her identification to get into a training camp, she will go undercover as an instructor. They want her to deactivate the current in the fence so that they can get in.

Oleg hooks Nina up to a lie detector test and explains to her how it tests her heart rate, blood pressure, pulse, etc. He begins quizzing her so that she can practice beating the test and lying to Stan later.

Phillip and Charles go undercover and meet with a professor to discuss computer science, he explains to them how the Arpanet works. He explains to them there is a “beast” upstairs (a huge computer) that generates information and says it to the interface process messenger, which is like an information highway system.

Oleg and Nina are still practicing on the polygraph test. He explains to her that the machine is like a wasp and if she panics it will sting her.

Elizabeth meets Larig in a park for a meeting while Phillip stands by with a sniper rifle in case he makes a move. Larig reveals that he won’t be able to make the meeting at the training camp because he is leaving for Nicaragua and will be gone for about six months. Elizabeth tells him that they will still need his help getting on base. He ignores her and tells her he is surprised she came to meet him alone and then gets up and walks away.

Elizabeth meets up with Lucia and tells her that they need a new plan and Larig won’t be there to help her get in. Lucia snaps and says that Larig has to be there. She had planned to kill him, to avenge her father’s death. Elizabeth tells her she doesn’t care how much of a monster Larig is, Lucia can’t harm him, he is an asset to their cause.

Elizabeth heads home and tells Phillip that Lucia has been planning to kill Larig all along. Phillip tells her she’ll get over it, she’s young and impetuous. Elizabeth doesn’t think so though she says Lucia “burns hot.”

Henry heads outside to play and tells his Mom he’ll be home by dinner. He sneaks into someone’s house by letting himself in with the key under the matt. He raids the refrigerator and sits down in the livingroom to play a video game on the TV.

Nina heads to Stan’s and sits down for her polygraph test. Stan sits on the bed and observes. The tester asks her if she is a pretending to be a soviet spy and really spying on the FBI, among many other questions. Stan is delighted when the test is over and he tells Nina that she passed.

Charles heads back to the Professor’s office after hours and says he left his glasses inside, the security guard lets him in. Charles rummages through the desk and finds the passcode he needs to get into the room where the “beast” is located. Phillip is already inside and under cover as a janitor. There is a wrench in their plan when they realize the lab is not empty.

The polygraph tester leaves and Stan apologizes to Nina for doubting her. Stan wants to get her out, but Nina says she doesn’t want to leave him. She wants to stay, she isn’t scared of Oleg. Stan says he will hand over the files on Oleg to protect her.

Phillip sets off an alarm in the building so everyone clears out of the lab. He hooks the bug his handler gave him up to the large computer and waits for it to copy the information. Once he finishes his mission he meets up with Charles for drinks, Charles says that it was “exhilarating.” Phillip informs Charles that he killed someone, because they came back to the room while he was waiting for the bug to copy. Charles says it had to be done. Phillip doesn’t agree. Charles says he had a grand old time, and to call him anytime he needs him again. After Charles leaves Phillip finds out from the bartender that he has been drinking again.

Nina leaves Stan and heads to Oleg’s house. She strips off her clothes and climbs into bed with him and he tells her that she is an “amazing woman.”