BY Amanda Austin on May 7, 2014 | Comments: Leave Comments
Related : Recap, Television, The Americans 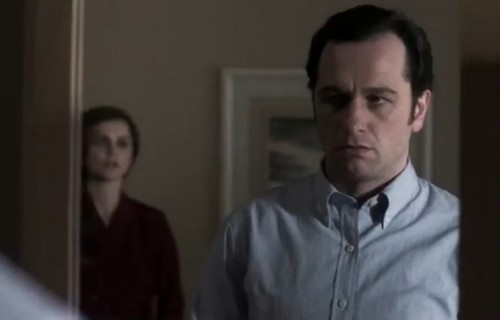 Tonight on FX another new episode of THE AMERICANS is on for you to enjoy. In “Stealth,” Elizabeth makes a surprising discovery about Kate. Meanwhile, Stan pursues illegals.

On last week’s a new mission with international stakes had Philip calling on Annelise for assistance just as an old foe returns to D.C. with a vendetta. Stan made a discovery that put the FBI hot on the trail of Illegals.  Did you watch last week’s episode?  If you missed it we have a full and detailed recap, right here for you.

On tonight’s episode Elizabeth makes a shocking discovery about Kate. Philip pursues a contact for information about stealth. Stan continues his pursuit of the illegals. Written by Joshua Brand; directed by Gregory Hoblit.

Tonight’s episode looks like it is going to be a great episode and you won’t want to miss it, so be sure to tune in for our live coverage of FX’s “The Americans” Season 2 episode 11 at 10 PM EST! While you wait for the recap, check out our sneak peek video of tonight’s episode below!

Tonight’s episode of The Americans begins with Anton, he is still being held captive by the Russians and being forced to create new stealth aircrafts. Anton alerts the man that he needs RAM (radar absorbent material) in order for the plane to be able to fly under the radar.

Paige arrives at home from her study group. She asks Elizabeth why she isn’t allowed to go to summer retreat this summer. Elizabeth says, “because I’m your mother,” whne Paige pressures her to tell her why she has been forbidden to go.

Elizabeth heads upstairs to go to bed and Phillip enters the room and informs her that the FBI knows about Emmett and Leann, and Stan paid their son Jared a visit. Elizabeth announces she is going to see Jared, and confesses she never gave him the letter from Leann. She is devastated that he might find out the truth about his parents from an American.

Stan informs Gaad that Leann and Emmett were both using aliases and going by names of children who had died years ago. Gaad can tell something is off with Stan, Stan confesses that things are “unsettled” at home.

Nina is briefing Arkady and Olag on the recent developments of Stan’s marriage. Arkady informs her she needs to up the ante and get Stan to give her information on the American’s Stealth plans.

Elizabeth arrives at Jared’s house and he reveals to her that an FBI agent paid her a visit. He informs Elizabeth that Stan showed him some pictures and “he’s not stupid.”

Elizabeth leaves and he heads to a pizza restaurant. She follows him in her car. A woman comes to meet him and she is shocked to see that it is their Handler Kate, and she isn’t even wearing a disguise.

Phillip goes under cover as a Vietnam Vet to get closer to a man who is claiming that the army poisoned him. He meets him in a lobby of a doctor’s office and bumps into him and steals his wallet. When he can’t pay for his medicine, Phillip steps up to the counter and pays for it for him.

Olag sneaks into Nina’s office and informs her that he has something for her. A Young Pioneer Pin, just like the one she told him she used to wear when she was a little girl.

Elizabeth calls Phillip at home and briefs him about Jared, she reveals that he is meeting with Kate, and is confused about why.

Kate arrives at home and walks through her apartment nervously. She bolts to the bathroom and grabs a gun, when se emerges Laric is in her apartment. He slams her against the wall and wrestles her to the ground.

Phillip pays Stan a visit, and tells him that his son Henry wants to interview him for his school project since he is an FBI agent.

Arkady takes Olag aside and tells him that if Nina fails her Stealth mission with Beaman the Centre is sending her back to Moscow and putting her on trial for treason, because she gave Stan classified information. Arkady informs Olag “it is out of his hands.”

Phillip tells Elizabeth that he thinks they should let Paige go to the church camp for the summer. Elizabeth says it is out of the question, she won’t let the church take their daughter.

Laric has kate tied up and is searching her apartment. He hooks up her radio so that he can receive her messages from her agents. He taunts Kate and tells her that it’s not her he wants, he wants the “ones that killed his friends.” He asks where they are and she spits in his face.

Olag finds Nina and confronts her about the treason she committed. She thinks that Olag doesn’t want anything to do with her since she committed treason but he reveals it is the opposite. He’s worried about her. He reveals to her that Arkady will send her back to Moscow if her plan fails. He tells her if Stan isn’t going to fall for it then she has to run.

Phillip pays the vet he met at the clinic a visit and returns his wallet that he lifted off from him. Phillip tells him that he can help him with money for his cancer pills if he tells him about RAM. He passes him an envelope of money and the vet reveals that RAM didn’t work. He goes on to tell Phillip that they used tiny microscopic iron balls suspended in paint, and the fumes killed the bats and killed him too. His cancer has spread to his brain and he makes little to no sense.

Phillip returns home and Elizabeth informs him they still haven’t heard from Kate. The Center wants her to go to their address and check on her.

Paige interrupts her parents and tells them that a group from the church is going to a naval base to protest nuclear bombs. Elizabeth shocks Paige and tells her she can go, she thinks it is a worthwhile cause.

Harry is interviewing Stan about his job as an FBI agent. Meanwhile Phillip and Elizabeth head over to Kate’s house to check on her. The house appears empty but Elizabeth finds a secret message Kate left them in the bathroom.

Nina barges in to the room where she meets Stan and informs him she has to run away, Moscow knows about the information she gave him. He comforts her and reassures her that nothing is going to happen to her.

Elizabeth and Phillip rush home and decipher Kate’s message, it says “get Jared out.”