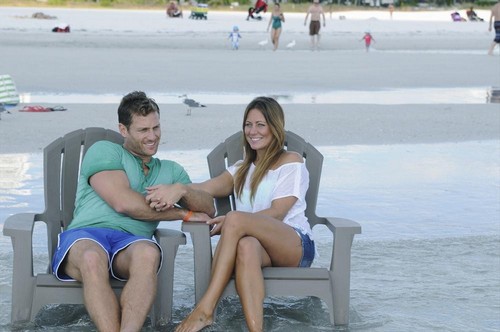 Tonight on ABC Juan Pablo Galavis continues his search for love on THE BACHELOR.  On tonight’s show Juan Pablo joins the four remaining Bachelorettes in their hometowns, only to have some of the families question his intentions about their daughter’s future happiness.  Did you watch last week’s episode?  We did and we recapped it right here for you.

On last week’s episode as the six final women made themselves at home on South Beach, one bachelorette struggled with a decision she might have to make that would affect everyone on this adventure. After travelling around the world, Juan Pablo had a moving reunion with his daughter, Camila, and shared his growing feelings for one particular woman with his cousin. A week of “shock and awe” ended with Juan Pablo making a crucial decision about which four women would have the opportunity to take him home to meet their families.  The drama of the rose ceremony and the need to say good-bye to certain bachelorettes took its toll on Juan Pablo. He was overcome with emotion and unable to celebrate with the four remaining women.

On tonight’s episode A two-night Bachelor special event begins as Juan Pablo, still smarting from Sharleen’s sudden decision to leave, starts his exciting whirlwind trip across the country to visit the final four women’s hometowns, and continues his search to find lasting love. A nervous Nikki welcomes the Bachelor, but she still can’t seem to tell him how she feels about him. Andi’s family takes aim at her blossoming relationship with Juan Pablo, but will it destroy her chance at love? Renee shares a wonderful reunion with her son and the Bachelor, but she too struggles to find the words to describe her feelings for him. Finally, Clare shares a rare, intimate moment with Juan Pablo, bringing them closer until one family member threatens to ruin everything for the couple. The dramatic journey ends when he must make a gut-wrenching decision to narrow the field to three women – one of whom he hopes will be his future wife.

Tonight’s episode of The Bachelor kicks off in Kansas City, Missouri, Nikki Ferrell’s hometown.  Juan Pablo meets up with Nikki in Kansas City and gives him a brief tour, she is “excited to see how cowboy Juan Pablo is.”  She takes Juan Pablo to Oklahoma Joe’s to enjoy some Kansas City cuisine.  When they are done eating, Nikki takes him to a local barbeque so that he can ride a mechanical bull.  Nikki was pleasantly surprised with Juan Pablo’s bull riding skills and admitted he is “more of a cowboy than she expected.”  Nikki really wants to tell Juan Pablo that she loves him, but it doesn’t feel right yet.

After their day out Nikki brings Juan Pablo back to her parents’ house to meet her Mom, Dad, and younger brothers.  Juan Pablo sits down to dinner with her Dad and brothers, and Nikki sneaks off with her Mom to talk about Juan Pablo.  She confesses to her Mom that she loves Juan Pablo, and that if Juan Pablo proposes to her she will definitely say yes.

Juan Pablo sits down with Nikki’s Dad, Juan Pablo tells her Dad that he “trusts Nikki’s honesty” and she is easy to talk to.  Nikki’s Dad asks Juan Pablo not to propose to her unless he is 100% serious about their relationship.  Nikki confessed to her Dad that that she thinks Juan Pablo is “magical” and she is prepared to take on the role of step-mom to Camila.  Overall Nikki’s parents approve of Juan Pablo, and trust her to make the right decision.

Next Juan Pablo travels to Atlanta, and meets up with Andi, she has a surprise for him.  She takes him to an Atlanta firing range called “Sharp Shooters.”  Andi shoots first, and impressed Juan Pablo when she hits the bulls-eye.  It’s Juan Pablo’s turn, and the instructor has to teach him how to hold the gun.  After several shots, Juan Pablo finally hits the target.

After target practice at the shooting range, Andi takes Juan Pablo home to her family’s house.  She is really excited to see her family, but she is panicking inside because she knows how skeptical her parents are.  Nikki and Juan Pablo sit down with her parents and tell them about the places they have travelled to.  Her Dad is not happy when he learns that Andi didn’t get a 1-on-1 date until there were eight girls left.

Juan Pablo and Andi sit down for dinner with her family, and her Dad is obviously not a fan of Juan Pablo.  He is concerned because he can tell Andi is infatuated with Juan Pablo, and Juan Pablo is infatuated with three other girls.  After dinner Juan Pablo manages to win over Andi’s Mom, but then he has to sit down with her Dad.  Juan Pablo asks Andi’s Dad if he will accept him and Camila in his family if he proposes to Andi.  Andi’s dad refuses to answer, he tells Juan Pablo that the man that is going to marry his daughter isn’t going to be dating three other women.  Meanwhile Andi’s sister confesses to Andi that she doesn’t “see it” between her and Juan Pablo.  Andi sits down with her Dad, and admits that she still hasn’t fallen in love him yet.

Juan Pablo travels to Florida next, and meets Renee on the beach.  They head to her son Ben’s little league game, and Ben gets to meet Juan Pablo.  After they get to know each other, Ben heads out on the field and Juan Pablo and Renee sit down on the bleachers and cheer him on.
After Ben’s little league game, Juan Pablo heads to her Mom’s house to meet the rest of her family.  While Renee tucks Ben in to bed, Juan Pablo sits down with her Mom and discusses how much he likes Renee. Renee’s Mom sits down with Renee afterwards and tells her that she wants her to make sure she is in love.  Renee declares she is “madly in love with Juan Pablo,” she just hasn’t told him yet.  Overall Renee’s parents seem to approve of Juan Pablo, they just want to be sure that he makes her happy.

It’s time for Juan Pablo to make his final hometown visit to Sacramento to meet Clare Crawley’s family.  They meet up in a park and sit on a bench and Clare preps him to meet her family, and admits he is the first guy that she brought home since her Dad passed away.

Clare and Juan Pablo head to her Mom’s house so that her family can meet him.  Clare confesses to her sister that if Juan Pablo would propose to her, she would “marry him in a heart-beat.”  Clare’s sister seem to think that Juan Pablo is “deserving of her love.”  Her other sister Lara isn’t ready to give Clare her blessing though, she wants Clare to keep in mind that there are three other girls, and Juan Pablo might not choose her.  Clare is trying to have a heart-to-heart with her Mom, and Lara won’t let her Mom speak, Lara thinks that Clare is “pressuring their Mom into supporting her.”  Juan Pablo finally gets permission from Lara to sit down with Clare’s Mom, who gives him her blessing.  Clare’s Mom tells Juan Pablo they would be “very happy to have Juan Pablo in their family.”
It’s time for the Rose Ceremony, Nikki, Clare, Renee, and Andi wait for Juan Pablo to arrive at the ceremony and hand out the roses.  Juan Pablo arrives, and passes out roses to: Nikki, Clare, and Andi.

Renee Oteri has been eliminated from The Bachelor.