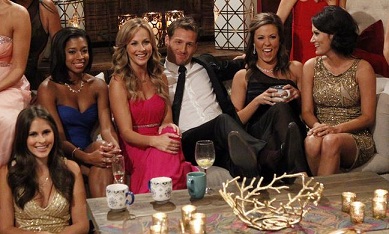 Season 18 of The Bachelor has been a long and bumpy ride, but Juan Pablo has managed to narrow his search for love down to the Final Two, Clare Crawley and Nikki Ferrell. The Bachelor Season Finale isn’t set to air for two weeks on ABC, but next week Bachelor fans can tune in to the special ‘Women Tell All’ episode.

It sounds like the Bachelor’s ‘Women Tell All’ episode will more or less be a “Curse Juan Pablo Out Episode.” There will be seventeen of Juan Pablo’s ex-bachelorettes in attendance, and none of them are exactly thrilled to see him. Most of them actually have a bone or two to pick with The Bachelor.

According to Reality Steve, Kelly Travis will be in attendance at the ‘Women Tell All’ episode, and she has some choice words for Juan Pablo. Kelly Travis (who you most likely remember as “dog lover” and Molly’s Mom) actually has a gay Dad. So, you can imagine she was not happy when Juan Pablo called homosexuals “pervert” and then blamed it on a language barrier. This will be the first time Juan Pablo has been called out on The Bachelor about his anti-gay comments, so it will definitely be interesting to see how he explains himself.

Also, on the ‘Women Tell All’ special Juan Pablo is asked why he met Renee’s son Ben, and then eliminated her the next day, why he used his daughter Camila as an excuse to not kiss certain girls, and he even screws up and calls Cassandra’s son by the wrong name.

If you are not a fan of Juan Pablo, then the ‘Women Tell All’ is a must see, The Bachelor will be in the hot seat and desperately trying to talk his way out of all of the negative accusations that have been made against him over the last few months.