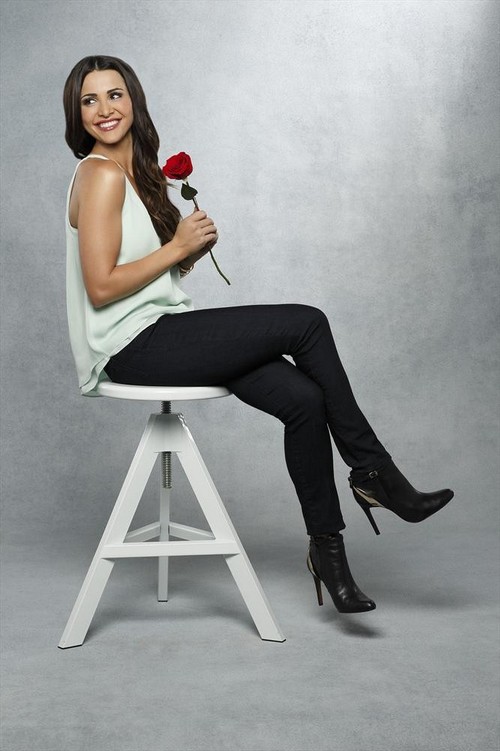 The Bachelorette Andi Dorfman returns tonight on ABC with a new episode called, “After the Finale Rose.” On tonight’s episode Andi is going to be recapping the entire show from beginning to end in a live interview with Chris Harrison along with Nick Viall and Josh Murray.

On the last episode, after Andi’s dramatic breakup with Juan Pablo last season, she refused to give up on her search for her one great love. After surviving shocking twists and turns and a journey filled with laughter, tears and love, Andi narrowed down the 25 bachelors to two fabulous guys – Josh and Nick. Josh is the type of man Andi has always dated in the past – handsome, athletic and playful – but Andi is plagued with a nagging doubt that he may be too good to be true. Her relationship with Nick is undeniably passionate and filled with an intensity she has never known, but she worries that it may be overwhelming. In this week’s dramatic conclusion, Andi is absolutely torn between the two men and can envision a future with both, but she only picked one in the season finale. Did you watch the last episode? If you missed it we have a full and detailed recap, right here for you.

On tonight’s episode, Andi recaps the season in a live interview with host Chris Harrison; and Top 2 finalists Nick Viall and Josh Murray give their take on the outcome of the show. Also included: a sneak peek of “Bachelor in Paradise.”

Tonight’s live episode of After The Final Rose kicks off with host Chris Harrison taking the stage. Andi has made her final decision, and she is currently engaged to Josh Murray. Chris reveals that Nick Viall was devastated when Andi sent him home. He returned home to Milwaukee after Andi Dorfman dumped him, and he felt like he was living a nightmare. Nick’s Mom Mary is concerned about Nick, and how badly he has been hurt, and she thinks that he deserves answers.

Before the finale aired, Nick sat down with Chris Harrison and pleaded with him to set up a date with Andi because he is still in love with her and he needs to have a face to face with her. Chris sat down Andi in her dressing room and informed her that Nick really wants to talk to her, but Andi says that it’s not the right time. So, Nick gives Chris a letter and asks him to deliver it to Andi.

Chris Harrison brings Nick Viall out on stage, he asks Nick what was going through his mind in the Dominican Republic the day that Andi sent him home. Nick says that he was confused and blind-sighted because Andi had given him so many reasons to think she was going to choose him. Nick admits that he still has questions for Andi, he knows Josh won’t take her for granted, but he will always wonder about what could had been between him and Andi.

Now Chris introduces Andi, and she joins him on stage with Nick Viall. This is the first time the two have seen each other since she dumped him in Dominican Republic. Nick tells Andi that he has been trying to reach out to her to tell her how much their relationship meant to him, he says that if Andi read the letter, then she knows how he feels. Nick says that no matter what happens and as heartbreaking as it is that she chose Josh, he will always be grateful that she taught him how to love again. The hardest part for him is watching it back and seeing Andi in love with him at one point. Chris interrupts and asks Andi if she was ever in love with him. Andi says that she wasn’t in love with him, and that’s why she never said it to him. Andi says that Nick didn’t do anything wrong, but her relationship with Josh was much better that her relationship with Nick.

Next Chris Harrison brings Andi’s fiancé Josh Murray out on stage and they appear together for the first time since the finale has been aired. They confess to Chris that they have been sneaking over to each other’s places in disguise while they have been waiting for the finale to air. Andi is excited to finally be able to go out in public together though, and have a steak dinner and walk the dog in the park. Chris jokes that they “can’t keep their hands off each other.”

Before the ATFR is over Chris Harrison has a surprise for Andi. Since she has such a trademark “frowny face” and social media has mocked her for it the entire season, Chris Harrison brings out “Grumpy Cat” to meet Andi and Josh and jokes that he can be their first child.