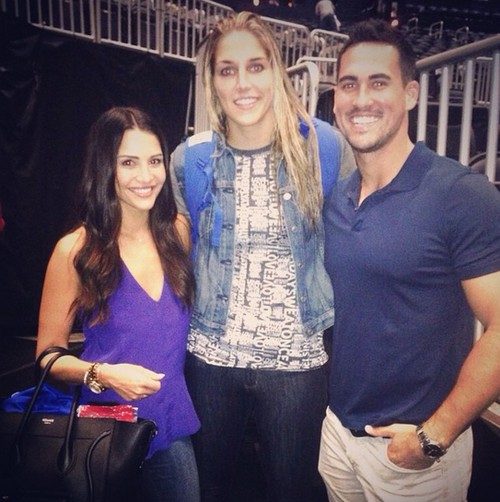 Season 10 The Bachelorette 2014 Andi Dorfman is currently engaged to winner Josh Murray, but ever since Josh put a ring on it, the couple has been embroiled in scandal and controversy. While Josh Murray has some serious trust issues, and for good reason when you take in to consideration the fact that Andi had sex with runner-up Nick Viall just hours before she accepted Josh’s proposal, Andi has been accused of being a fame-hunter and choosing Josh Murray as the winner because she wanted a televised wedding event like alumni Sean and Catherine.

When The Bachelorette season 10 was still underway, it was revealed that a girl named Brittany McCord had dated both Josh Murray and his younger brother, Aaron Murray. As if sharing a girl with his brother didn’t make Josh look bad enough, it was also discovered that he was still in contact with Brittany and talking to her on SnapChat behind Andi Dorfman’s back.

After Andi accepted Josh’s proposal, she began spending time with his family and Josh posted a photo of Andi, himself, and his brother Aaron at one of Aaron’s NFL games. Sources have reported that Andi is “super close with Aaron and obsessed with his career.” On Season 10 of The Bachelorette, Andi mentioned on more than one occasion that she’s always dated athletes, and Josh was a retired pro baseball player.

So, it sounds like Andi is missing the glitzy life of dating pro athletes since Josh is no longer in the game, and that is why she has shown so much interest in Aaron’s career. As much as we would like to believe that this isn’t the case, we can’t ignore the fact that before Josh and Andi appeared on Season 10 of The Bachelorette, Andi was flirting with Josh’s little brother Aaron on Twitter!

No wonder Josh has trust issues, not only did his fiancée cheat on him with Nick Viall, but now she is using their engagement to get closer to his pro football playing brother Aaron Murray! What do you think, Bachelorette fans? Is Andi more interested in Josh’s brother, Aaron, than she is with Josh? Let us know what you think in the comments below!