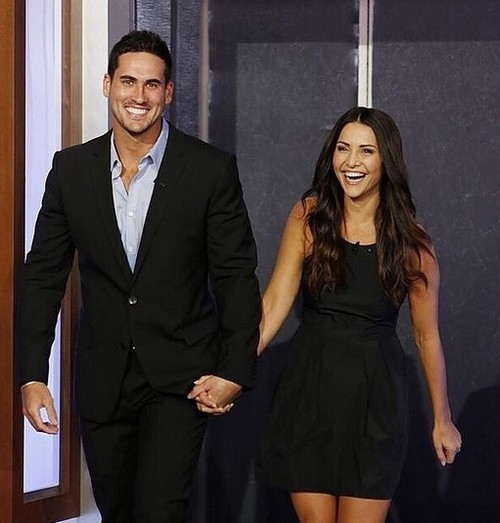 Season 10 The Bachelorette 2014 Andi Dorfman and her new fiancé Josh Murray have been bombarding the internet with candid photos of them going to NFL games, playing golf, and celebrating Josh’s latest birthday. It has been a long time since any Bachelor or Bachelorette couple tried this hard to sell the happy couple image. And, no one is really buying it after the shocking After The Final Rose episode when Nick Viall announced Andi had “made love to him.”

When Andi Dorfman quit her job and revealed she wouldn’t be returning after she finished filming The Bachelorette 2014, it became clear that she wanted to pursue a career in the entertainment business. And, several sources have mentioned that she is competing in the next season of ABC’s Dancing With The Stars. Andi has hinted several times that she also wants an extravagant televised Bachelorette TVwedding, just like Sean and Catherine’s. It’s obvious that the reason she chose Josh Murray at the last minute over Nick Viall, is because he will play the perfect celebrity husband. And, marrying Josh would further her career as The Bachelorette much longer than marrying quirky Nick Viall would.

Any man in his right mind would be furious when he learned on live television that his fiancée slept with another man literally hours before he proposed to her, but Josh Murray apparently shrugged it off and went golfing with Andi. The only sensible explanation as to why Josh doesn’t care that Andi was sleeping with other men, is that he has no interest in sleeping with her and is using her for fame just as much as she is using him.

As the days go by, and Andi and Josh play the part of the perfectly happy couple, it is beginning to look more and more like their engagement was more of a business transaction. Why else would Josh be okay with the fact that Andi had sex with another man, and the entire world knows about it? What do you think Bachelorette fans, are Andi and Josh a fraud? Do you think they are truly in love, or just in it for the fame? Let us know what you think in the comments below.