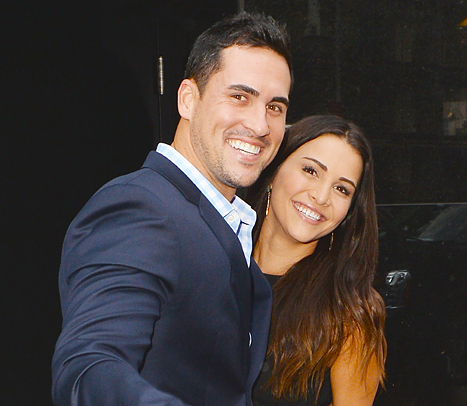 Season 10 of The Bachelorette 2014 was pretty cut and dried and unexciting, it was after the season finale that the true fireworks began. Chris Harrison revealed that runner-up Nick Viall was basically stalking Andi Dorfman and had tried multiple times to sit down with her, implying that he was a creeper. However, during the After The Final Rose show Nick shocked the audience by revealed that Andi had “made love to him” just days before she kicked him to the curb and got engaged to Josh Murray. No wonder he was stalking her, we would want an explanation too!

Josh Murray being the proud man he is, ignored Nick Viall’s shocking confession and took the live stage after him and gushed to Chris Harrison about how much he and Andi were in love. We all knew that once the cameras stopped rolling, all hell would be breaking loose though. Multiple episodes during Season 10 of The Bachelorette revolved around Josh Murray’s trust issues and how he valued honesty. He was livid when Andi wanted him to take a lie-detector test because he thought that she should trust him like he trusted her, and he also mentioned on more than one occasion that he hated cheaters and he had been cheated on in the past. There was no way he was okay with Andi having sex with Nick Viall, less than 24 hours after she had sex with him.

Since The Bachelorette 2014 ended, Andi and Josh have been on a whirlwind press tour, and bombarding social media with happy couple propaganda. But, we aren’t fooled. Multiple sources have come forward and told the press outlets the truth about Andi and Josh, their public arguments, and their lengthy list of issues. Josh is old-fashioned, controlling, and jealous, and he can’t get over the fact that Andi cheated on him with Nick. But, Andi refuses to end their relationship. She quit her job to pursue a career in the entertainment world and in order to do that she needs to get Josh Murray down the aisle. Andi is determined to become the next Sean and Katherine and she wants that extravagant, all expenses paid wedding.

So, the question on every one’s mind is obviously, will Andi and Josh make it down the aisle? Well, we can’t predict the future, but we can tell you that if they say their “I Do’s” it will be a huge mistake. No relationship can be built from the ground up on lying, cheating, and jealousy…and survive.