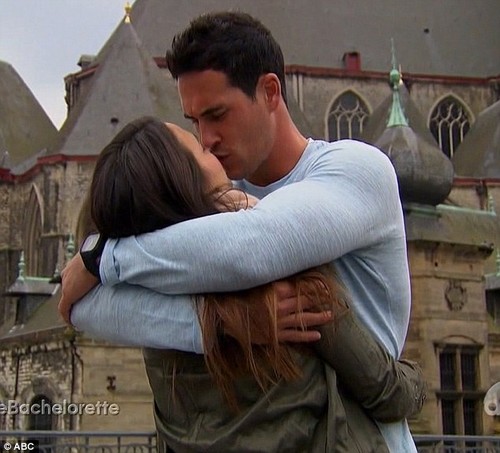 On the Season 10 finale of The Bachelorette 2014 it was revealed that Andi Dorfman sent Nick Viall back to Milwaukee broken-hearted and is currently engaged to ex-baseball player and Atlanta resident Josh Murray. Josh and Andi put on quite a show during the After The Final Rose special, and gushed about how happy they were and planning their wedding. Rumor has it, Andi and Josh aren’t exactly as happy as they are pretending to be though.

Halfway through Season 10 of The Bachelorette, Josh Murray was engrossed in a scandal with his ex-girlfriend Brittany McCord. Screen shots of Murray’s SnapChat account were leaked to the internet, revealing that Josh was still in contact with McCord, and he actually talked to her more often than he talked to his own fiancée Andi.

We have watched Andi Dorfman for two season of The Bachelor and The Bachelorette, sure we don’t personally know her, but we know enough about her to know that she has a no-nonsense attitude when it comes to her relationships. So, why is she perfectly okay with Josh carrying on a relationship with his ex-girlfriend? Well, Andi seems almost as dedicated to finding love as she is to succeeding in the entertainment business. She recently quit her job as the assistant district attorney of Atlanta, and it clearly wasn’t because she was moving across the country to be with her new boyfriend, since Josh lives in Atlanta. Several media outlets are reporting that Dorfman wants to try to make it in the television business and is even competing on the next season of Dancing With The Stars.

If Andi’s relationship with Josh Murray goes south, then the chances of her succeeding in the TV industry will drop drastically. Andi and Josh’s marriage looks more and more like an arrangement of convenience every day, which explains why she is willing to turn a blind eye to Josh’s wandering eye.