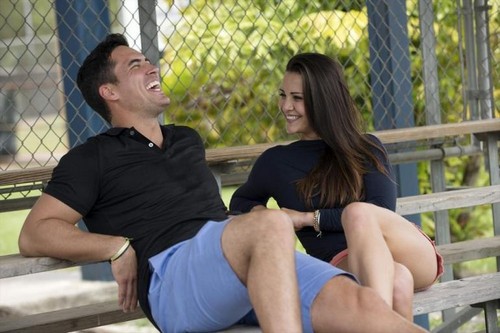 The Bachelorette Season 10 finale is not set to air until July 28th, but tabloids have already released spoilers claiming that Andi Dorfman gave her final rose to Josh Murray and the couple is currently engaged, including Life & Style Magazine. Andi actually graces the cover this week’s L&S, along with the caption “1 Million Dollar TV Wedding.”

Rumors have recently emerged that there is trouble in paradise and Josh is currently talking to his ex-girlfriend Brittany McCord, and Andi is secretly talking to runner-up Nick Viall behind her fiancé Josh’s back. However, according to Life & Style Magazine the couple is solid, and are currently planning their wedding together.

Life & Style’s inside source claims, “They spend night after night on the phone together, talking about themes, colors and flowers. Andi wants a traditional wedding with Southern flair. They even send each other pictures of their ideas!” The magazine’s source goes on to explain that Andi and Josh want to get married as soon as possible because ABC is willing to shell out over a million dollars on the wedding, as long as they can air it on television.

So, are Andi and Josh going to be the next Bachelor Franchise couple to say their “I Do’s?” This year the network spent a pretty penny on Catherine and Sean’s wedding, and ratings weren’t as high as expected. Considering Josh and Andi are even less popular than Sean and Catherine were, it’s overly optimistic to assume the network is willing to spend millions of dollars on their wedding.