The Bachelorette 2014 Spoilers: Nick Viall and Josh Murray BOTH Slept With Andi Dorfman – Nick’s Bedroom Fail – Josh is a Stud! 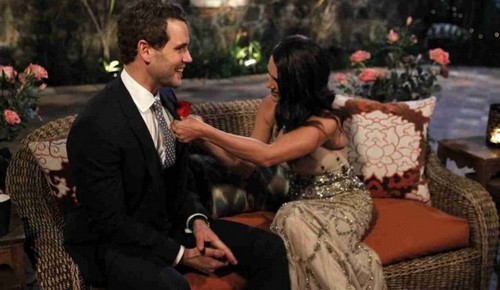 The Bachelorette 2014 Season 10 is winding down, and Andi Dorfman has narrowed her search for love down to her final three bachelors, Chris Soules, Josh Murray, and Nick Viall. Nick has been an obvious frontrunner since the season began, and if it weren’t for the fact that spoilers have been leaked claiming Josh Murray and Andi Dorfman are currently engaged, then anyone who has watched the show would assume that Nick Viall received the final rose. With just the fantasy suite dates left, we all can’t help but wonder what went so horribly wrong that at the last minute Andi Dorfman changed her mind and gave the final rose to Josh?

You know that old phrase, don’t buy a car before you test drive it? Well, apparently bachelorette Andi Dorfman lives by it. Tabloids reported weeks ago that Andi Dorfman slept with both Nick Viall and Josh Murray during their fantasy suite dates, and she was not pregnant and had no idea who the father was. Andi quickly took to Twitter and denied the rumors that she was pregnant, but she did not deny that she slept with both bachelors. It doesn’t take a rocket scientist to determine that Nick Viall obviously performed poorly once he got Andi alone in the fantasy suite, turning her off so much that she ended up choosing her second choice Josh Murray in the end.

Ironically, Andi Dorfman walked out on Juan Pablo on the last season of The Bachelor after their fantasy suite date. Andi had just taken Juan Pablo home to her family and told everyone that she was falling in love with him, and then spent one night in bed with him during the fantasy suite date and changed her mind and quit the show.

It’s pretty clear that Andi Dorfman puts a lot of stock in how a guy performs sexually before she makes a final decision (not that we blame her), and it looks like at the end of the day Nick Viall didn’t make the cut. Have you been following The Bachelorette this season? Are you surprised that Andi Dorfman changed her mind after fantasy suite dates and opted to give her final rose to Josh Murray instead of Nick? Let us know what you think in the comments below and don’t forget to check CDL for all of your Bachelorette spoilers and recaps.