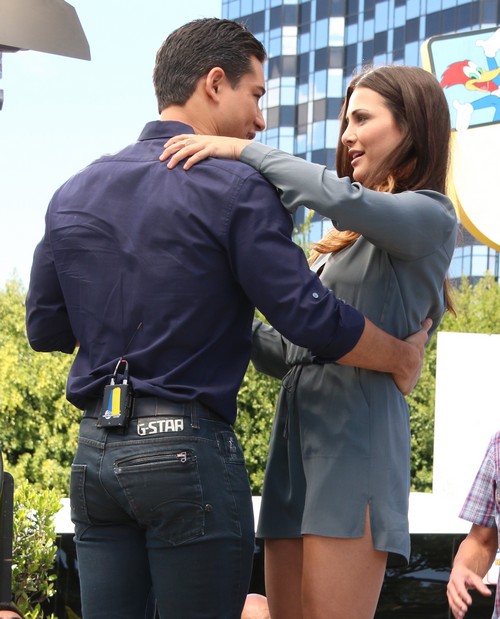 Season 10 of The Bachelorette 2014 is underway on ABC, and Andi Dorfman has narrowed her search for a future husband down to sixteen eligible bachelors. Episode 3 of The Bachelorette is set to air on Sunday June 1st, and according to spoilers Andi will send two more of her guys home at the Rose Ceremony, and another bachelor will choose to leave on his own before the episode is over. So, if you don’t want to know who is eliminated next on The Bachelorette, you should probably stop reading now. Spoiler Alert!

According to Reality Steve the infamous blogger and Bachelor Spy, Andi will take JJ O’Brien and Nick Viall on 1-on-1 dates, and then she will head out on a group date to Paseo Nuevo Mall where her guys will serenade her alongside Boyz II Men.

At the end of the date Andi will present the group date rose to Josh Murray. Dylan Pettit and Chris Soules are the two unlucky bachelors that have to sit this episode out and don’t get a date with Andi.

According to Bachelorette spoilers for Episode 3 Ron Worrell will bow out of the competition before the Rose Ceremony when a close friend of his from back home passes away.

Even though Ron Worrell quits The Bachelorette during Episode 3, Andi Dorfman still has to eliminate two more guys at the Rose Ceremony. Spoilers tease that the two guys Andi sends packing are Brett Melnick (the hair stylist that brought her a lamp from the hotel as a gift during the premiere) and Bradley Wisk (the opera singer).

So Bachelorette fans, how are you liking Season 10 so far? Do you think that Andi Dorfman made the right decision eliminating Brett Melnick and Bradley Wisk? Or is there another bachelor living in the house that she should have eliminated instead? Let us know what you think in the comments below and don’t forget to check CDL daily for more Bachelorette spoilers.