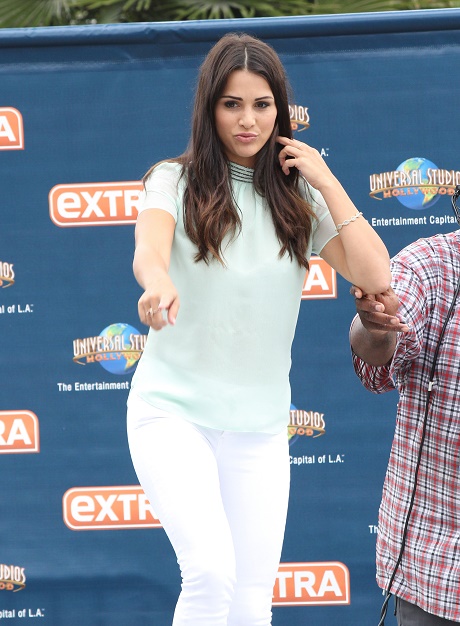 Season 10 of The Bachelorette 2014 Andi Dorfman‘s engagement to winner Josh Murray has been a subject of constant scrutiny and speculation, and according to recent reports, that is exactly what she wants. Andi and Josh’s TV wedding is looking increasingly farcical by the week so Andi and her manager are thinking about the next best thing – Couples Therapy! It became pretty clear that Andi Dorfman was actually searching for two things on the ABC reality TV series: a husband…and fame. When Andi was done filming the Bachelorette, she quit her job as a district attorney and hired a manager to help her boost her celebrity status. Reports surfaced that, even though Andi was having sex with Nick Viall during The Bachelorette, the reason she chose Josh Murray at the last minute was because he was well liked among production and would increase her chances of scoring an extravagant all-expenses-paid TV wedding.

Andi Dorfman was banking on appearing on ABC’s Dancing With The Stars, and several sources reported that she was in talks with the producers, but at the last minute they decided to go a different route and crumbled Andi’s hopes of fame and fortune. But, one of her former co-star’s recent gigs has inspired Andi and given her hope that she may have a second chance at getting back on the big screen. Apparently, all of the scandal and rumors of Andi and Josh’s engagement’s demise, are actually exactly what Andi wants, because she is trying to score a place on the next season of VH1’s Couple Therapy.

Andi’s ex Juan Pablo and her friend Nikki Ferrell recently began their stint on Couple’s Therapy, and sources are reporting their second reality TV show is inspiring Andi Dorfman. Considering the fact that Nick Viall announced he had sex with Andi on live television just days before she accepted Josh Murray’s proposal, Andi and Josh are the perfect candidates for Couples Therapy. Would you watch Andi and Josh on Couple’s Therapy? Do you think that the rumors are true and Andi is planting stories in the tabloids about her failing engagement to increase her chances of getting on the reality TV show? Let us know what you think in the comments below!