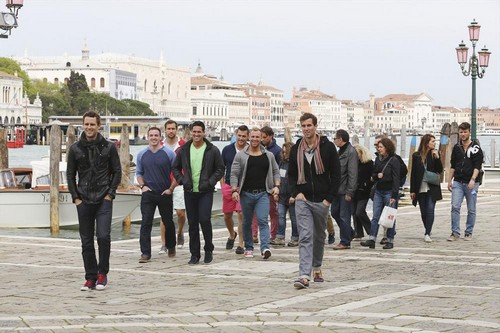 The Bachelorette Andi Dorfman airs tonight on ABC.  On tonight’s episode eight bachelors remain. They head to Italy, where Andi surprises one contender with his second one-on-one date and takes another man to Verona. Elsewhere, six bachelors visit Monselice, where they must take a lie-detector test.

On the last episode, Picturesque Marseille in southern France was the romantic backdrop for the start of Andi’s international quest to find her great love. Josh was the lucky man to get the first one-on-one date, exploring this beautiful coastal city with her. Their chemistry was hot, but did this handsome bachelor let Andi know he was capable of a deeper relationship? Nine men were rendered speechless when Andi took them on a group date where a professional mime teached them the tricks of the trade. Then, they were let loose on the French public, but there was trouble festering among bachelors which surfaced at the after party. In the end, Marquel, Patrick, and Andrew were officially eliminated from The Bachelorette..  Did you watch last week’s episode?  If you missed it we have a full and detailed recap, right here for you.

On tonight’s episode, one of the most romantic countries in the world – Italy — plays host to Andi and the eight remaining men. Nick is worried that he won’t get any time with Andi to set the record straight about his bad attitude. Six anxious bachelors have concerns when they have to take a lie detector test. Are they all hiding something? Finally, Cody gets a one-on-one date and must hope that his emotional plea to Andi to give their relationship a chance to blossom will be enough to get a rose. It’s getting down to crunch time — two weeks before the hometown dates– and Andi needs to make some tough decisions. The men who thought they were frontrunners suddenly feel like they are on thin ice.

Tonight’s episode of The Bachelorette takes place in Venice, Italy. Bachelorette Andi Dorfman meets the remaining eight guys as they arrive in Venice, and she reveals she has a surprise. She says that the first 1-on-1 date in Venice starts right now, and she will be taking Nick Viall.

Nick and Andi head off on their date and leave the rest of the guys standing in the street looking bewildered. Cody is frustrated because he still hasn’t had a 1-on-1 date with Andi, and she is already giving Nick a second date.

Nick and Andi head out on a boat ride together to explore Venice. After checking out some of the tourist attractions, they grab a slice of authentic Italian pizza at a small shop, and then head out in the square to feed the pigeons. Afterwards they get some gelato and get back in the boat and chat about what happened last week and all of the drama he has had with the other guys. After their 1-on-1 date Andi feels better about what happened last week with the other guys.

Back at the hotel, the other guys receive a date card. Josh, Brian, Dylan, Marcus, JJ, and Chris are heading out on the group date together, which means that the other 1-on1 date in Italy will be for Cody. He breathes a sigh of relief.

Later that evening, Andi and Nick get dressed up and head to a romantic dinner at a masquerade hall. Nick comments that it is “by far the most romantic room he has ever been in.” Over dinner, Andi confesses to him that the reason she gave him another 1-on-1 date is because she had a lot of questions for him about the drama he started last week.

She wants to know why the other guys seem to hate him and think he is “cocky and arrogant.” Nick admits that he doesn’t think any of the other guys share the same connection with Andi that he has, and Andi is his first priority and it’s hard for him to be friends with the other guys. Overall, Andi is pleased with their conversation and she presents Nick with the date rose. Andi surprises Nick with a masquerade masks and they hide outside and have their own private masquerade ball.

The next day Andi receives another note from her secret admirer. This is the third note she has received from one of the guys since the series began, and she still has no idea which one of the remaining eight guys keeps sending her the letters.

Andi heads out in the city to meet up with the guys for their group date. They check out a puppet show and then Andi has a surprise in store for them. She takes them to a medieval castle full of swords and armor. She reveals to them that she has arranged to give them lie detector tests to see if they have been honest with her thus far. Andi decides to be fair and takes a lie detector test herself.

Josh Murray is up next, and he’s not impressed with the lie detector test. He thinks that Andi should just trust him. After Dylan takes his lie detector test, he is paranoid of what Andi will think when she learns the results. He tells her that he is sick and needs to go back to the hotel before the results are revealed.

Later that night, Andi and the guys head to their cocktail party together. Brian takes Andi aside first; he has her put her hand on his heart give him another lie detector test. After joking around, they end up making out. Back at the table, the other guys are still trying to figure out who Andi’s secret admirer is, Chris still doesn’t confess to them that he has been sending the letters.

Andi sits down with Josh, and he makes it very clear that he wasn’t impressed with being forced to take a lie detector test. He confesses to her that he is “glad she ripped up the results.” Andi thinks that Josh is hiding something from her, and that is why he is so upset about the lie detector test. They bicker a little bit, and Andi has a cloud of doubt about keeping Josh around.

Chris scores some alone time with Andi next, he takes the time to confess to her that he is her secret admirer. She begins laughing before he is even finished and claims that she knew it was him all along. Andi’s mood quickly turns around, and Chris always seems to be there to pick her up when she is down. At the end of the group date, she gives Chris the group date rose.

After Andi leaves, the guys turn on each other. JJ thinks that it is BS that the other guys are congratulating Chris for getting the group date. Brian chimes in and adds that he is going to try the hardest to be the last guy standing. Chris snaps at JJ and tells him that his true colors will eventually shine through.

The next day, Cody heads out on his 1-on-1 date with Andi in Verona, Italy. She reveals that Verona is the birth place of Romeo and Juliet. Cody is determined to make Andi fall in love with him on their date. They head to Juliet’s courtyard and stand on the balcony. Afterwards they head to Club Di Juliette, people from all over the world send letters to Juliette there about their love troubles, and the staff responds to all of them. Andi and Cody sit down and read some of the letters and write words of advice back. Andi is amazed at how well Cody writes his letter.

Later, Andi and Cody head out to dinner and he reads a love letter that he wrote to her aloud, and tells her how much he likes her and he can’t wait to know more about her. He goes on to tell her that the longer he stays around the more she is going to love her. She stops him and tells him that right now they are just friends, and she doesn’t think there is any romance between them. Andi breaks down and cries. She says that she doesn’t want to keep him around any longer because it’s not fair to him and she respects him too much to keep dragging him along. She walks him to the car and sends him home.

It’s time for the rose ceremony and Andi joins the guys for drinks before she sends one of them home. Nick rubs the other guys the wrong way by jumping up and whisking Andi away, despite the fact that he already has a rose and knows he is not going home. The guys all take turns sitting down with Andi and try to woo her at the last second to secure their positions.

It’s time for the rose ceremony. Chris and Nick already received roses on their dates, so they are not in danger of being eliminated. Andi passes out roses to Brian, Marcus, Dylan, and Josh.

JJ O’Brien has been officially eliminated from The Bachelorette.