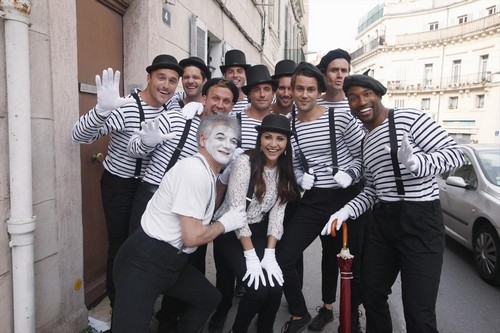 The Bachelorette Andi Dorfman airs tonight on ABC.  On tonight’s episode Andi and the 11 remaining bachelors visit the south of France, where one-on-one dates include a romantic sailboat ride and a movie screening at a French cinema. Meanwhile, nine men study with a professional mime and perform a show for the locals.

On the last episode, ABC’s popular reality dating series The Bachelorette aired a one hour special titled The Bachelorette: The Journey So Far. In this special episode it recapped the past four episodes up to now, if you missed it we recapped it all here for you.

On tonight’s episode, Picturesque Marseille in southern France is the romantic backdrop for the start of Andi’s international quest to find her great love. Josh is the lucky man to get the first one-on-one date, exploring this beautiful coastal city with her. Their chemistry is hot, but will this handsome bachelor let Andi know he is capable of a deeper relationship? Nine men are rendered speechless when Andi takes them on a group date where a professional mime teaches them the tricks of the trade. Then, they are let loose on the French public, but there is trouble festering among bachelors which surfaces at the after party. Will Andi be dragged into the drama? Brian’s individual date with the Bachelorette might satisfy her appetite, but will it ignite the passion in their relationship? It all ends in an explosive rose ceremony, stunning the remaining bachelors.

RECAP: Tonight’s episode of The Bachelorette kicks off with Andi Dorfman and her guys arriving in the South of France. They check in to the hotel, and the first date card arrives. Josh Murray scores the first 1-on-1 date, it’s in French so he has no idea what he is doing with The Bachelorette, but he is pumped to be spending time with her.

Meanwhile Andi sits down with Chris Harrison at a café in Marseille. She confesses to him that she is falling in love with more than one of the guys, and he wishes her luck on her date with Josh.

Later Andi arrives at the hotel to pick up Josh for their 1-on-1 date. They head out on a romantic boat ride together, and Josh shares his desire to have a family. Andi jokes that she’s really good at playing mind games. They arrive at The Callanques, and enjoy a picnic on the rocks of the shoreline, overlooking the Mediterranean Sea.

Back at the hotel the other guys are gossiping. JJ reveals to Marquel and Nick that at the first rose ceremony Andrew mumbled that Andi “gave roses to the two blackies,” referring to Marquel and Ron Worrell (who left during Episode 2 because of a death in his family). Marquel is shocked that one of the other guys would call him a “blackie,” and Marquel is deeply hurt and affected by what Andrew said.

Andi and Josh arrive is Palais Longchamp, they sit down for drinks together and Andi confesses to Josh that he is her “type,” but she has been cheated on before by athletes so she is skeptical. Josh doesn’t want her to base her opinion of him by previous athletes she has dated. Josh admits that he dated a girl in college but she cheated on him. He hasn’t met a girl that he cared about as much as he cares about Andi in five years. After their long chat Andi presents Josh with a date rose, and he accepts it. They head outside and Andi surprises him with a private concert from Ben Fields.

Next, Andi and the guys head out on their group date. Marquel puts his beef with Andrew aside and is determined to enjoy his time with Andi. Andi leads the guys through the streets of Marseille, and surprises them with a mime class. They line up and take lessons from a professional mime. After the lesson is over the mime has them change and leads them outside to the streets of France to show off their new miming skills.

Back at the hotel Brian receives his 1-on-1 date card, and it teases that Andi is going to share with him the “recipe for love.” Brian can’t wait until tomorrow when he gets to spend some alone time with Andi.

The guys’ mime performance isn’t going well, the French are a tough crowd. They even made a baby cry. Andi is impressed with Marquel’s miming skills. JJ takes Andi aside and reenacts their first date, by miming it. Andi can tell that Nick is not having a good time, he despises group dates and doesn’t enjoy sharing Andi with the other guys.

When they are done miming Andi and her guys head to their cocktail party. JJ steals Andi away from the cocktail party and takes her on a ferris wheel ride. Back at the party, the guys are gossiping. Cody calls Nick out for thinking he is better than the rest of the guys. Pat says that Nick is too confident and arrogant. Cody and Nick begin arguing and Cody curses him out, he tells Nick to stop mocking him because being on The Bachelorette is a big deal.
Andi returns and takes Chris aside. She wants to know what is going on in the cocktail party, Chris admits that Chris is being cocky. Cody sits down with Andi next, and tells her that Nick is making fun of him for saying he is thankful to be on the show. Andi takes Nick aside to address his issues with the other guys. He confesses that he insulted Cody, and takes responsibility for what he said, he also reassures her that he apologized to Cody. Then he reads her a letter he wrote to her telling he that he “sees a future with him.” Andi kisses him, but deep down inside she wonders if he is manipulating her like he is the other guys in the house.

Marquel is going crazy thinking about what Andrew allegedly said about him, he decides to take him aside and confront him about calling him a “blackie.” Meanwhile Andi is completely oblivious to what is going on and spends some alone time with Marcus. He confesses to her that he is “falling in love with her.”

Andrew sits down with Andi later on, he says the other guys have “attacked him” a few times. Andrew says that all of the drama in the house is getting in the way of him building a relationship with Andi. At the end of the group date Andi hands out the group date rose to JJ. Nick is devastated that he didn’t receive the group date rose.

The next day Andi arrives at the hotel to take Brian out on their 1-on-1 date. She surprises him by taking him to a private movie theater and they sit down for a screening of The Hundred Foot Journey. After their movie they decide to go to the market and pick up ingredients and frog legs, they head back to Andi’s to make dinner for themselves.

Once they get in the kitchen, Andi is shocked to see how miserable Brian is. She can tell he is not a fan of cooking. In the movie they watched, The Hundred Foot Journey, the couple cooking together looked so romantic. For some reason, it’s not working for Brian and Andi. They sit down to eat the frog legs that they prepared, and realize it is disgusting. They decide to head out for dinner and drinks instead. They chat about how horrible their date was in the kitchen, Brian confesses that he was overthinking everything and strategizing too much. At the end of the date Andi presents Brian with a rose, despite the horrible time they had in the kitchen.

The next night Andi arrives at the cocktail party with the guys, before the rose ceremony. Chris Harrison arrives, and Andi tells him she doesn’t think they need to have the cocktail ceremony. She has already made up her mind and knows which three guys she wants to send home.

Chris heads out to the guys and informs them that there will be no cocktail party and none of the guys will get any 1-on-1 time with The Bachelorette tonight. He ushers them right through to the rose ceremony.

It’s time for the rose ceremony. JJ, Brian, and Josh already have roses. Andi passes out roses to Marcus, Nick, Cody, and Dylan.

Marquel, Patrick, and Andrew are officially eliminated from The Bachelorette.