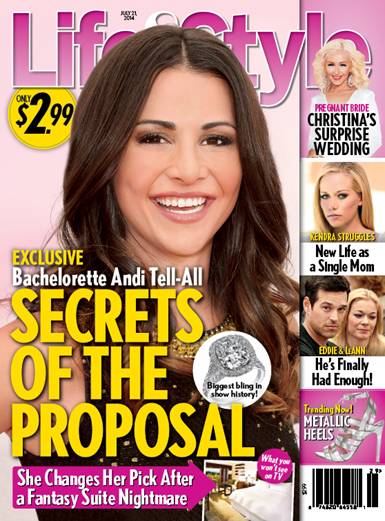 I guess a night or two in the Fantasy Suite really did help current Bachelorette Andi Dorfman to decide which guy she was going to give that final rose to. After a season of trying to weed out some of the worst possibilities in the history of the ABC series, Andi is finally down to the wire and according to the July 21st print edition of Life & Style Magazine a disaster in the Fantasy Suite was so bad that it ultimately caused the stunning brunette to completely change her mind about which man she should propose to!

Of course we know that Andi admitted in a backhanded way that she slept with Nick Viall and Josh Murray during her fantasy suite dates. We also know as does the entire world that Josh Murray is The Bachelorette 2014 season 10 winner and that he and Andi are currently engaged. Additionally CDL uncovered evidence that Josh may have cheated with ex-girlfriend Brittany McCord after he already won and was already engaged to Andi Dorfman. And let’s not forget Nick’s angry outburst which was recorded and exposed by the great Reality Steve! Yes, true love indeed….

Will Christina Aguilera be a married woman before giving birth to her daughter? It sounds like there is a pretty good possibility that the starlet will swap vows with longtime beau Matthew Rutler before she sets foot in the delivery room. One new mom isn’t quite as lucky as Christina seems to be. Just a few short weeks after welcoming her daughter Kendra Wilkinson has found herself smack in the middle of a nightmare when her husband of five years, Hank Baskett was caught cheating with a transgendered model. According to Life & Style Magazine Kendra is basically functioning now as a single mom and the struggle is real.

Could we finally be creeping up on the end of Eddie Cibrian and LeAnn Rimes’ marriage? Supposedly he has had more than enough with her special brand of crazy and is ready to pull the plug on things. Would you be surprised if they finally split? I’m kind of shocked that they have lasted this long, aren’t you? Tell us your thoughts in the comments below!