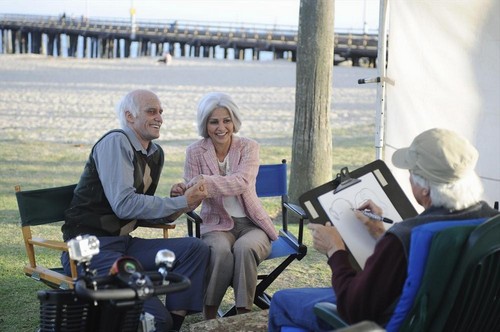 The Bachelorette Andi Dorfman airs tonight on ABC with a special night.  Tonight’s episode is the first of a two-part episode which will lead to explosive drama.   The 12 remaining bachelors hit the stage with “Boyz II Men” and “A Nice Senior Couple” takes in the signs of picturesque Santa Barbara.

On last week’s episode Eric was pumped when he found out that he scored the first romantic outing of the season. Fourteen men were in for a big surprise when they met Andi at a popular male exotic revue for what was a special event for charity – “Bachelor Gives Back.” But what they were asked to do caused everyone to blush. On the last date, Chris was treated to a glamorous 1940′s style day at the races at Santa Anita Park. But, at the cocktail party, one man had to apologize for his bad behavior during the group date and had to hope Andi will give him a second chance. After careful deliberation, three men were sent packing as the Bachelorette attempted to make her fairytale come true.  By the end of the show Craig, Nick S, and Carl were all  eliminated.

On tonight’s episode a two-night Bachelorette special event begins as Andi hits the road with her 16 remaining bachelors to the beautiful coastal city of Santa Barbara, California. Nick V., who has had his share of doubts about this journey, will get a chance to ease his worries on a day-long tour of the city with Andi. Twelve guys get the date of a lifetime when they discover they will be singing with R&B icons “Boyz II Men,” but are stunned to find out it will be in front of a live concert audience. J J and Andi take a leap into the very far future when they are turned into a sweet 80-year-old couple by Hollywood makeup artists and proceed to fool the Santa Barbara citizens. Meanwhile, one bachelor receives devastating news that brings his search for love to a halt, but how will Andi react? And a major confrontation between some of the men brings questions about whether one of them is here just for a good time

Tonight’s episode is going to have people talking and you are not going to want to miss a minute. The Bachelorette airs tonight at 8PM so don’t forget to bookmark this back and come back later for our recap then!

Tonight’s episode of The Bachelorette kicks off with Chris Harrison paying Andi’s guys a visit at Bachelor Mansion. He delivers the first date card, which invites Nick Viall to “ride off in the sunset” with her in Santa Barbara.

Nick Viall heads to Santa Barbara and meets up with Andi Dorfman, and they go for a bicycle ride together to the beach. Andi decides they should go on a hike together.

Back at Bachelor Mansion, Andrew and Marcus are gossiping about Nick. Andrew doesn’t think he “believes in the process” and that he will be completely open with Andi. The guys conclude there is a 50% chance Nick might not get a rose at the end of the date.

Next Andi and Nick head to a romantic dinner at the Court House, and Nick confesses to her that he was engaged in the past, but it didn’t work out. Andi thanks him for being so honest. At the end of the night Andi gives Nick a date rose, and they kiss. Andi confesses that kissing Nick “is amazing and she feels a spark.”

Now it’s time for the group date, the guys pile into limos and head to the date. Bradley thinks he has the group date rose in the bag, since the date card hinted there would be singing. They arrive at the Music Academy of The West, and Andi heads outside to greet them. The guys head inside with Andi are shocked to see the band Boyz II Men waiting for them. Andi reveals that on the date they are going to sing the Boyz II Men hit song “I’ll Make Love To You.”

They divide the guys into two teams and begin working with the band on the song. Bradley can tell the guys are already jealous of the fact that he has a background in music. Marquel is feeling pretty confident, and announces that he is going to “serenade the f—k out of Andi.” Meanwhile, Andi is getting he own singing lesson, and plans on performing with the guys. She sings about as well as she dances.

After a few hours of practice, Andi reveals to the guys that they are going to a Boyz II Men concert, and performing on stage with the band. Later that evening Andi meets the guys at the concert, and they all arrive decked out in matching suits and sweaters. Andi and her guys head up on stage and completely embarrass themselves, Josh and Marcus even forgot half of the words to their parts of the song.

After their horrendous concert, Andi and the guys have a cocktail party afterwards. Andi takes Cody aside for some 1-on-1 time. Andi jokes with Cody and accuses him of having a girlfriend. He begins panicking and says that he has been single for over three years. Andi cracks up and he realizes she was just playing a prank on him.

Back at the mansion the third date card of the night arrives. JJ O’Brien is shocked to learn that he is the next bachelor to score a 1-on-1 date with Andi.

Marcus received a rose on the last group date, and he is hopeful for a kiss during this group date.

Andi says it is “about time” he kisses her. He thinks that what they just experienced “was special” and he has the group date rose in the bag.

Josh spends some 1-on-1 time with Josh Murray next, and the spend the majority of the time making out. He confesses to her that he “likes her a lot and likes everything about her.” Josh is confident that he is going to win the group date rose too.

At the end of the date, it is time for Andi to hand out the group date rose. She says the rose is for someone who “opened up to her and made her feel good” and then gives the group date rose to Josh Murray. Marcus is a little upset he didn’t get the rose, but he is sure that whatever Andi and Josh have is nothing like the connection he has with her.

The next day Andi heads out on her 1-on-1 date with JJ. She announces that they are going to “grow old together.” They head to a make-up artist and they get makeovers to make them look like they have been married for fifty years. JJ can’t believe how sexy Andi looks as an old lady. He thinks he looks like a “creepy uncle.”

They head to the park dressed up as old people and meet a group of people and tell them that they are out celebrating their fiftieth wedding anniversary. They have strangers take their pictures together, then they go for a ride on their motorized scooters around Santa Barbara. Andi and JJ then proceed to play football in the park and do cart wheels in their old people disguises. Strangers watch on, impressed by how agile they are for their ages.

Meanwhile back at the Bachelor Mansion, Ron Worrell receives an upsetting phone call. He announces he has to leave because he has a family emergency and heads upstairs to pack his bags. Before he leaves he says his goodbyes, and informs the other guys that a close friend of his passed away.

After their jaunt around the park, Andi and JJ ditch their old people disguises and head out to a romantic dinner together.

Back at the mansion Dylan has a heart to heart with Nick. He confesses that his sister and his brother both passed away from drug overdoses. He is disappointed that he hasn’t had any 1-on-1 time with Andi and hasn’t been able to share his story with her.

Andi arrives at the Bachelor Mansion to have a cocktail party with her guys. She gives a heartfelt speech about Ron’s unexpected departure and then they begin mingling. Andi sits down with Eric and he thanks her for choosing him for his 1-on-1 date. While they are talking Andi receives a huge vase of flowers from Nick Viall.

Andi seeks out Nick next and kisses him and thanks him for the flowers and he tells her that he missed her. He confesses that he has “real genuine feelings for her.” JJ takes Josh aside, and they talk about Andrew hitting on the hostess during their last outing. Josh agrees that they need to address Andrew and him getting the hostess’ phone number. JJ and Josh take Andrew outside and confront him. They ask him if it is true that he got the hostess’ number. Andrew tells them he “isn’t going engage with them” and storms off. JJ chases after him and shouts “man the f—k up!” Andrew locks himself in his room and slams the door in their faces.

Meanwhile downstairs Andi is making out with Marcus, and oblivious to their drama. He slips her a note that he wrote and tells her to read it later. Andrew is convinced that JJ and Josh attacked them because they seen him as a threat. He heads downstairs and announces that he was handed a phone number the second or third night they were there. Nick and JJ call him out and say that he was definitely bragging about it and he told over six guys about it. Andrew refuses to stoop to their level though.

It’s time for the rose ceremony. JJ, Nick, and Josh all already have roses from their dates. Andi hands out roses to: Marcus, Bryan, Tasos, Patrick, Eric, Dylan, Cody, Marquel, and Andrew.

Bradley and Brett have been officially eliminated from The Bachelorette.