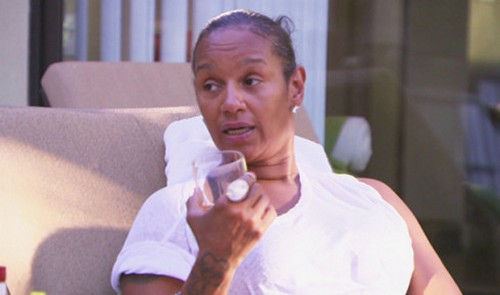 Monday night means that it’s time for VH!’s BASKETBALL WIVES LA! On tonight’s new episode with the group still reeling from the effects of Jackie’s event, Sundy decides the ladies need a getaway to Palm Springs-but for the good of the group, Brittish is not invited. Meanwhile, Brittish’s fiancé, Lorenzo Gordon, negotiates a deal to play basketball overseas, leaving Brittish behind.

On last week’s episode Draya confronted her boyfriend, Orlando Scandrick, about accusations of possible infidelity with Jackie’s daughter, Chantel. Jackie’s gala event fell apart when almost none of her friends show up to help, and adding to that drama, Brittish got into an altercation with Malaysia.   Did you watch last week’s episode? If not we live blogged it and there is a full recap for you right here.

Tonight’s episode is sure to turn into a hot mess because let’s face it, they always do. Plus Sunday is organizing a getaway and trips never seem to end up being a relaxing vacation when you get the whole cast together. You’re not going to want to miss the drama that is sure to unfold on tonight’s episode and we’ll be right here live blogging it as well.

What are your thoughts on the new additions to the cast of THE BASKETBALL WIVES LA this season? Hit up the comments and tell us whether or not you’re liking the new ladies!

With the group still reeling from the effects of Jackie’s event, Sundy decides the ladies need a getaway to Palm Springs-but for the good of the group, Brittish is not invited. Meanwhile, Brittish’s fiancé, Lorenzo Gordon, negotiates a deal to play basketball overseas, leaving Brittish behind.

Tonight’s episode begins with Brittish and Jackie talking about the drama from the event. Brittish doesn’t think it was a big deal and tells Jackie things happen at parties. Jackie is sticking to the point that the ladies promised to help and they did not. She is upset that Draya never even showed up. Even though Draya was angry, Jackie felt she should have still come to the event as promised.

Malaysia and Draya meet up for some body wraps and talking. Draya shares that she is angry about how Jackie handled the Orlando issue. Malaysia shares that she wants nothing to do with Brittish. They talk about how embarrassing it must have been for Brittish’s fiancé when Brittish acted out and could not control herself at the event.

Malaysia came over to Brandi’s. She updates her on the IVF treatments and shares that she’ll need her help or support while Jason is gone. Brandi shares all the things Malaysia will have to do such as giving her shots and taking her to and from appointments, and she obliges.

Jackie is interested in wants to have her own brand of brandy. She meets with a man who can provide some information and brings Sundy along. They taste several different types of brandy. Both ladies get a little tipsy at the meeting.

Brittish and Lorenzo are at the house when Mike calls with updates on where he is at and the work he is doing to try to get a good contract for Lorenzo. They talk about the possibility of him playing in Germany. They both like it but Brittish doesn’t like the girls there and worries she’ll end up in trouble for getting into it with someone. Guess Lorenzo can’t take her anywhere.

At Beso Malaysia, Brandi, and Sundy clear the air and talk things out without Jackie around. Sundy feels like women need to sit and talk things though. Sundy brings up Brittish and her hope for Malaysia to accept her again. Brandi does really like Sundy so the ladies decide to make past issues water under the bridge. The three decide on a trip to Palm Springs. Malaysia doesn’t want to be included if Brittish will be there and makes it clear that she won’t attend any events where Brittish is present. Sundy is over the drama even though she understands the issue Malaysia has with Brittish.

Brandi has a romantic dinner with Jason before he leaves. Normally Brandi travels with Jason, but this time she plans to stay back to deal with her IVF issues. They talk about how much they’ll miss each other. They toast to new beginnings.

Lorenzo and Brittish are at home when Lorenzo gets a call from his agent. He hears that he needs to leave the next day to begin a contract with an international team he played for previously. Normally she is more excited about his new contracts, but this is the first time she won’t be going with him. She knows they’ll be apart for months and she is not taking it well. The fact that he has to leave the next day makes things that much worse. It is actually refreshing to see Brittish without her tough-girl attitude and just being genuine and open about her feelings. Oddly as she is completely crying, Lorenzo has a smirk on like he is ready to crack up laughing throughout almost the entire conversation.

Brandi tries to talk Malaysia and Draya into going to Palm Springs for the trip Sundy is planning. Draya is still upset with Jackie and doesn’t like Brittish and Malaysia cannot stand Brittish. Draya also thinks Jackie is still upset about her not coming to the event. She thinks it will be a dangerous scene if they go to Palm Springs.

Sundy meets with Jackie and tells her the plan for the Palm Springs trip. Jackie is skeptical. Sundy tells Jackie that she doesn’t want to invite Brittish. While Jackie tells Sunday she is not down with not inviting someone, Sundy reminds her of the firecracker that is Brittish. She has exploded on more than one occasion. Jackie lets her explain her plan, but thinks she is crazy to believe things will go well.

Jackie and Sundy arrive in Palm Springs, and Brandi comes out to greet them. Jackie and Sundy ask about Malaysia and Draya and Brandi shares that she is not sure if they’ll come. Sundy thinks that if the ladies can work things out, then they can bring Brittish back in the mix and be a good example for her since she is the young one. Brandi calls Jackie on bringing up the private issue in front of Malaysia and Sundy. She believes she did the right thing by telling Draya about Orlando possibly doing some dirt behind her back, but she feels she should have told her one-on-one. Jackie suggests to Brandi that she stays out of it since she is so close to Malaysia. They think there is going to be a war when and if the ladies show up. Shortly after, Draya and Malaysia show up and they are both prepared for a war.

While this week was a little tame…think of it as the calm before the storm because next week, there is going to be some crazy drama in Palm Springs!! See you next week CDLers!